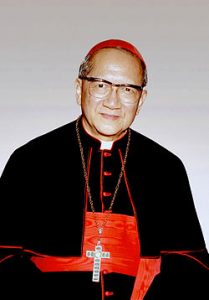 political prisoner of the Communist regime for thirteen years, nine of which he spent in solitary confinement, Francis Xavier Nguyen Van Thuan’s experience is a powerful testimony of faith in the Eucharist and in the power of forgiveness and the redemptive value of the cross. Cardinal Van Thuan’s writings and spiritual insights written in prison, where he celebrated the Mass in secret with a drop of wine in the palm of his hand, have spread around the world giving hope to millions. Who can ever forget the words of St. John Pope John Paul II at the conclusion of the Lenten retreat that Cardinal Van Thuan preached to the Roman Curia in 2001:

“With simplicity and the breath of divine inspiration, he has guided us in deepening our vocation of witnessing to evangelical hope at the beginning of the third millennium. A witness of the cross in the long years of imprisonment in Vietnam, he has frequently recounted the realities and episodes from his sufferings in prison, thus reinforcing us in the consoling certainty that when everything crumbles around us, and perhaps even within us, Christ remains our unfailing support.”

In September 2007, the cause for Cardinal Van Thuan’s Beatification was opened in Rome. As a prisoner he underwent the most brutal torture and dehumanization, but Van Thuan always strove to love the very prison guards who abused him. Some of the guards were so moved by his example they later converted to Christianity. Van Thuan would later write,

“…only Christian love can change hearts, not weapons and not threats…it is love that prepares the way for the announcement of the gospel. Omnia Vincit Amor “Love conquerors everything.” 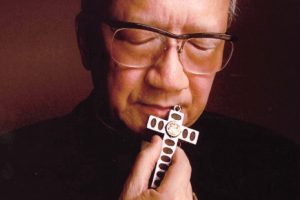 Salt + Light Television made a very moving documentary of this holy man’s life that was premiered at the International Eucharistic Congress in Quebec City in 2008. That film helped to spread Van Thuan’s message of hope and love. Now that Pope Francis has signed the decree recognizing the heroic virtues of this extraordinary, holy man, Francis Xavier Nguyen Van Tuan is on the road to beatification and canonization.