So Where Did the Nativity Scene Originate? 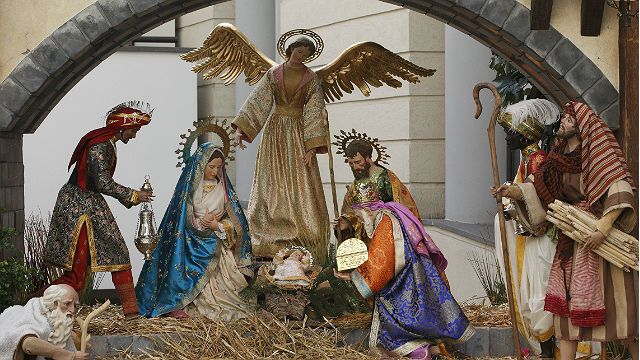 In 2007 I was a fresh-faced reporter at a diocesan newspaper. My editor assigned me to write a piece on the history of the nativity scene. I tracked down a priest and professor of church history and set off interview him about the history of the nativity scene. I did not do a Google search before the interview because my interviewee was a more reliable source of information. Imagine my surprise when I asked “So where did the nativity scene originate?” and he answered “Actually, St. Francis created the nativity scene in 1223 in a small town called Greccio.” Had I not been seated, I might have fallen over. How had I lived three years in Italy, travelled up and down the boot, (including Umbria and Tuscany) and not heard about St. Francis inventing the nativity scene? I press “record” on my voice recorder and sat mesmerized as the story was laid out before me. Picture this: Greccio, 1223. As he goes about his work, shepherding the faithful of Greccio and the surrounding area, Francis notices a disturbing trend: his flock are more caught up in the material preparations for Christmas than the spiritual preparation. Disconcerted, wanting to help his parishioners remember the true significance of Christmas, he thinks hard about what he can do. Then it comes to him…but the idea is new and different; so new and different that before he does anything he asks the pope for permission. The pope agreed with his idea, and so Francis set the ball rolling on his plan. With the help of one of the townspeople he borrows and ox and a mule. The ox and mule are taken to a cave on the outskirts of the town where Francis sets up a temporary altar. In the cave he arranges a manger, and has townspeople stand in for Mary and Joseph. That night he leads the townspeople, by torchlight, to the cave. There he celebrates Mass and preaches about the birth of Jesus in a stable…a scene that the townspeople can now see with their own eyes thanks to Francis’ idea. Legend has it Francis was so moved with love for our Lord that during his homily he couldn’t bring himself to say the name “Jesus.” Instead he use the phrase “the babe of Bethlehem.” Within 100 years every church in Italy was setting up a manger scene at Christmas. The Vatican is no exception: every year in mid-november scaffolding goes up in the middle of St. Peter’s square and a manger scene is built. The scene, like the Christmas tree alongside, is donated by a different region in Italy. The 2015 manger scene come from Verona and the “Verona per L’Arena” foundation, which promotes the cultural activities at Verona’s historic outdoor arena.