So this is Christmas…. 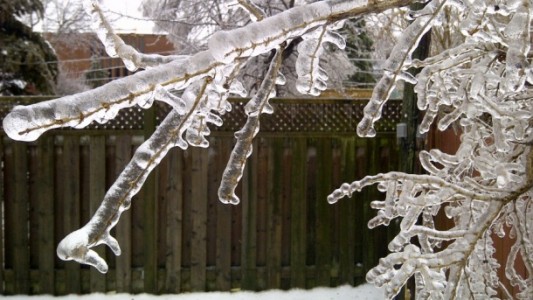 Who doesn’t know the familiar song by John Lennon?
Toronto is hit by an ice storm, over 600.000 households without power, large branches cover the streets and live cables are hanging loose, but in our hearts we’re confident that power will be restored soon enough, and Christmas is still some days away; no reason to panic.
The 22nd passes, no power. The 23rd, no power and the indoor temperature is eight degrees by now, no warm water, no light and nowhere to go. Hydro Toronto is working around the clock to re-establish power, but so far I haven’t seen any trucks in our dark neighbourhood, and Christmas is inching closer….
It's Dec 24, 7.00am and I wake up in a cold house with temperature of around three degrees indoors, and at this point it's obvious we can’t stay here any longer. During the week I have to cover shifts at work to ensure the broadcast, so I pack a change of clothes, towel and toothbrush and head for the S+L office, still hoping and praying that power will be restored during the day and all will be back to normal to celebrate Christmas later tonight.
But as time passes reality hits: It’s now 8pm on the 24th, still no power back home; I’m at work, alone, no Christmas meal planned and no warm house to go to...
“So this is Christmas...”
I ‘Google’ for the closest Midnight Mass, which turns out to be at St. Michael's Cathedral and after Mass I pass by McDonald’s for a meal and head back to S+L where I fix the couch in our studios and prepare myself for an uncomfortable night. While I’m lying in our dark studio waiting for sleep to come, I reflect on what it is that makes christmas Christmas?
Well, earlier I had had a good laugh with the security guard to whom I usually don’t talk and I have to admit that I did feel a certain warmth at McDonald’s where we had wished each other a Merry Christmas.
I thought about the hydro workers who were without their families as well and prayed for them. I thought about all those people at Mass and wondered how many of them had power at home.
But most of all I thought about St. Joseph and how he had to take care of his family during the night, without power, without a place to go and I felt a deep love and closeness to the Holy Family like I had never felt during Christmas before.
So maybe this is Christmas; sharing each other's hardships, paying attention to the love of those around us and making sure that that love becomes a mutual love.

Jeroen Van Der Biezen is the Master Control Manager at S+L. He took the photo in his backyard during the latest ice storm in Toronto. His power came back 2 days after Christmas: Deo Gratias!