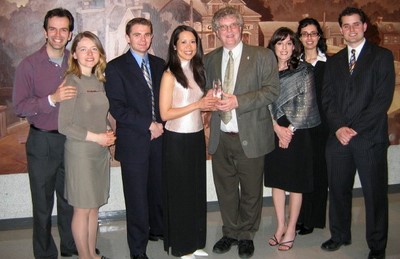 Some exciting news for Salt + Light over the weekend. It is custom at their annual conference that the Association of Roman Catholic Communicators of Canada (ARCCC) presents an award of recognition for special contributions to Christian or religious communications. This year, Salt + Light was proud to have been selected as the recipient of the award, as a network that has made distinguished contributions to the development of communications in the Catholic and Christian Church in Canada.ARCCC president Deacon Bill Kokesch presented the award to Salt + Light Television representatives noting that it’s members make up the new generation of journalists and communicators of the faith who will continue contributing to make a difference.On behalf of Salt + Light Television’s CEO Father Thomas Rosica, producer Mary Rose Bacani thanked the Association for the distinguished honour recalling that at Toronto’s 2002 World Youth Day, John Paul II challenged young people to be the salt of the earth and the light of the world, a challenge that Salt + Light Television has gladly accepted.Salt + Light Television also extends its best wishes to ARCCC on the occasion of their 25th anniversary celebration.For more on the event, including footage, check out Monday, May 7th Zoom update.For the official ARCCC press release, click on the option below to read the rest of the entry. FOR IMMEDIATE RELEASEMonday, May 7, 2007Salt + Light Television Honoured for its Promotion of Young CommunicatorsSalt + Light Television of Toronto has been has been recognized for its commitment in encouraging young people to take their place in the Catholic media by the Association of Roman Catholic Communicators of Canada (ARCCC) at an awards banquet held May 5th in Toronto.The award is presented to any religious communicator, project, or organization to recognize their contributions on a national level to religious communications in a pluralistic, secular society.Salt + Light Television was created in July 2003 following the enthusiasm and energy of World Youth Day 2002 as a Catholic television network in Canada that would reflect the realities of the Canadian Church and provide a window for young Catholics to take an active role on reporting on Church activities.The ARCCC Award was given to Salt + Light Television because of its continuing program of forming young people in the use of media as a tool of evangelization in Canada. It was also noted that the presence of young Catholics on the television screen provides a youthful and positive image of the Church in Canada.Salt + Light Television is part of the Salt + Light Catholic Media Foundation. Its CEO is Rev. Thomas Rosica, CSB, the former Director of World Youth Day 2002. It is available on select cable and satellite companies in Canada on the digital grid.Formed in 1981, the mission of ARCCC is to help Roman Catholic communicators make effective use of contemporary means of social communications to bring Gospel values to the world. The 60-plus members from across Canada includes bishops, diocesan communicators, congregational communicators, television producers, newspaper/magazine editors and journalists.-30-For more information:Bill Kokesch, President,Association of Roman Catholic Communicators of CanadaPhone: (514)717-4769E-mail: kokesch@videotron.ca