Saints and their furry and feathered friends 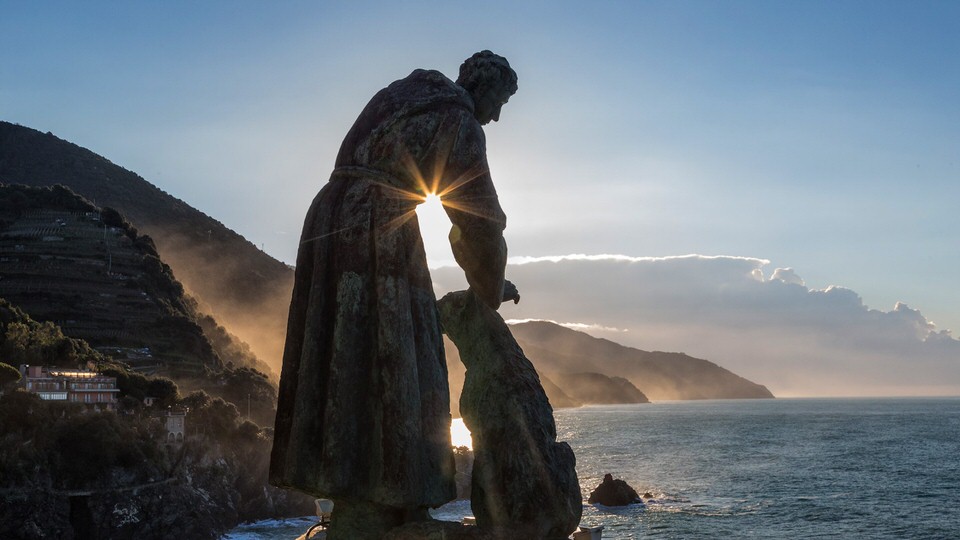 Statue of St. Francis of Assisi and the wolf of Gubbio at the Capuchin Franciscan monastery of Monterosso al Mare in Italy. Photo credit: Gianfranco Negri on Wikimedia Commons, cropped and used under the terms of license CC BY-SA 4.0
This weekend, many people will gather in parish parking lots with their pets for the annual blessing of animals often observed on or around the memorial of St. Francis of Assisi (Oct 4), who, for all his radical holiness, is most remembered today as a lover of animals. The truth is somewhat more spiritual and less sentimental than he tends to be credited with (Exhibit A: all those kitschy garden statues), but in his connection to the humbler creatures of God’s Earth, he is not alone among the saints. Whether stories about the saints’ relationships with animals reveal a yearning for a new Eden or are intended to show a command of supernatural graces which could only come as God’s gift to his most faithful disciples, I really don’t know. But they sure do make for some entertaining stories!   The poisoned loaf 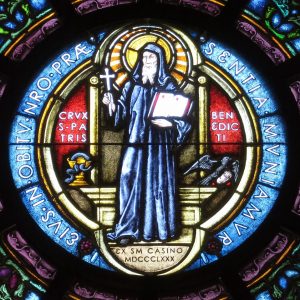 St. Gregory the Great tells us in his Dialogues (II.8) that St. Benedict of Nursia had a raven (some translations call it a crow, but I prefer raven) that would visit him every day at dinner time to be fed from the hand of this great Father of Western Monasticism. One day, an enemy, envious of the saint’s holy reputation, sent him a gift: a loaf of bread which he had poisoned. Benedict, knowing the loaf was tainted, ordered the raven to carry it away to someplace where it could do no harm. The bird obeyed and returned some hours later to receive his usual supper. Still today, the raven is a symbol of St. Benedict and can be found on his medal.   One loaf or two? Another holy man who had a raven friend was St. Paul the Hermit. Credited with being the first Christian hermit, he lived in a cave in Egypt for many decades during the 3rd and 4th centuries AD, 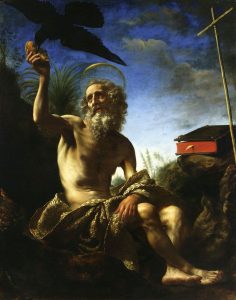 where he was fed by a raven which brought him half a loaf of bread each day (sounds a bit like the story of Elijah in 1 Kings 17:2-5). Then one day, so the story goes, the raven brought him a whole loaf of bread. Lo, and behold, a guest arrived: another famous hermit by the name of Anthony. St. Jerome tells us that Paul died soon after, to Anthony’s great sorrow. But then he witnessed something astonishing. Two lions came bounding out of the desert, mourned at the body of the holy hermit, and then proceeded to dig his grave with their great paws.   The lion’s paw 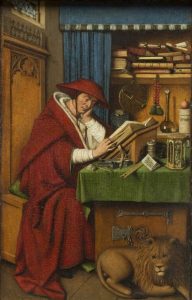 Speaking of St. Jerome and lions, he himself has a famous story whereby a lion entered his monastery, sending all the monks fleeing in terror. Jerome, however, noticed that the lion seemed to be in pain. Approaching the animal, he removed a thorn from its paw and earned himself a friend for life. It was been suggested that since there is a similar story attributed to a somewhat contemporary saint named Gerasimus, 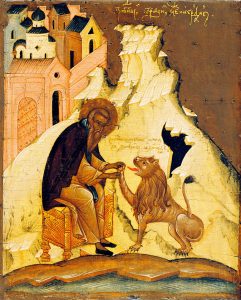 confusion by the author of the 13th-century Golden Legend caused the similarly named Jerome (in Latin, Hieronymus, and later, Geronimus) to be credited with this kindly act despite his otherwise fiery temperament. So hardly anyone remembers Gerasimus now (at least in the West), while for hundreds of years, art has been created depicting Jerome with his feline friend (though artists often struggled with what a lion actually looked like) – indeed it is the surest way to recognize him!   A wolf in donkey’s clothing St. Jerome and St. Gerasimus were not the only saints to make such unlikely friends among the Lord’s more carnivorous creations. There were once two Benedictine monasteries in Normandy, France: Jumièges for the monks and nearby Pavilly for the nuns. 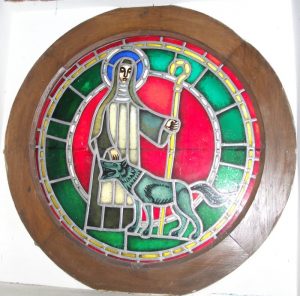 In the early days of the monasteries, so the story goes, in the 7th century, the nuns used to do the monks’ laundry. To help them in this task, they had a clever, hard-working donkey which would go between the monasteries all by itself with the loads of laundry. One day, a wolf killed and ate the donkey. When the abbess, St. Austreberthe, discovered the deed, the wolf meekly confessed his guilt, and she commanded him to make reparation by taking the donkey’s place. This the wolf obediently did to the end of his life.   A horse is a horse, of course, of course, unless… A somewhat similar story is told about St. Corbinian, the 8th-century evangelizer of Bavaria. While he was on his way to Rome, a bear emerged from the forest and killed his pack horse. 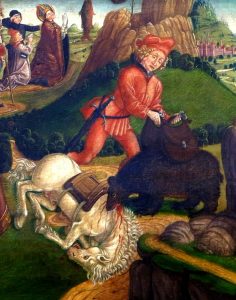 Corbinian ordered the bear to carry the horse’s load but released the animal from his service once they reached Rome. The saddled bear is a symbol of the German city of Freising and its diocese, and when Joseph Ratzinger (now Pope Emeritus Benedict XVI) became Archbishop of Freising-Munich, he included it in his coat of arms. (As a slight side note: Pope Benedict is well known for his great love of cats!)   Oh deer St. Giles was a popular saint in the Middle Ages who famously had a pet deer, from whom he received milk to supplement his sparing, vegetarian diet as a hermit living in the woods. One day when the local king was out hunting, he came across the holy hermit’s companion and gave chase. The deer ran home, and when the king tried to shoot her, the arrow struck St. Giles instead, laming him for life. For this reason, St. Giles is the patron saint of people with physical handicaps (among many others!). 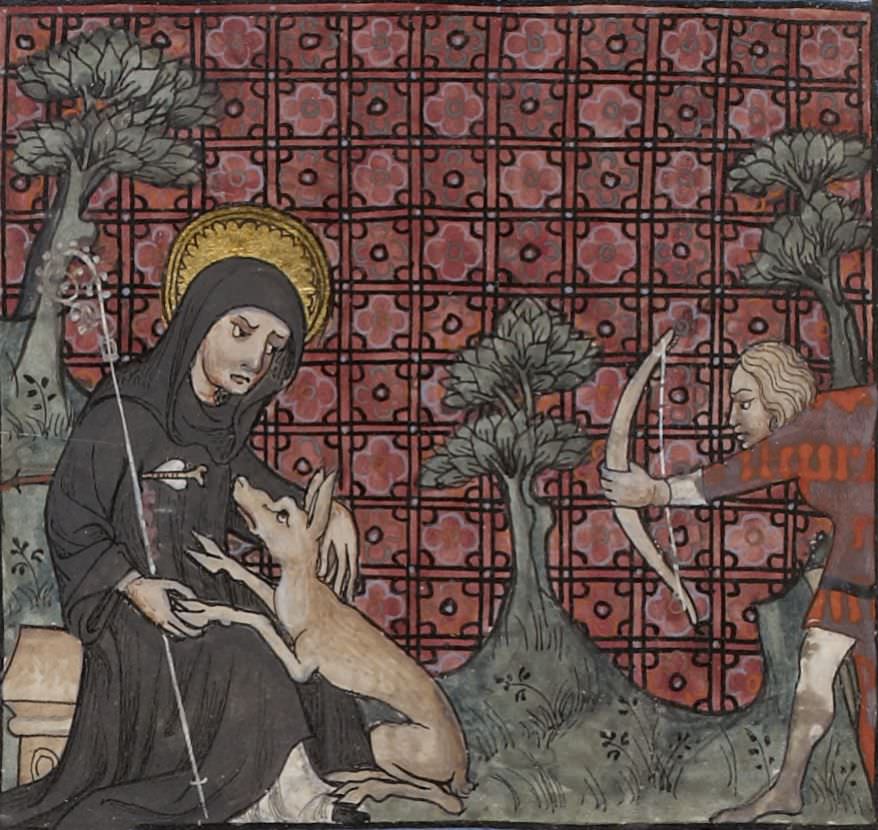 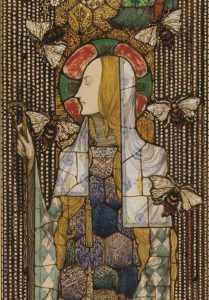 St. Gobnait was a holy woman of Ireland who had a special relationship with bees. So much so that she is the patron of bees and beekeepers. But it wasn’t only honey and wax she received in return for her care of her diminutive friends. Legend says that she once drove away a marauding band of cattle raiders by siccing her bees on them. Bees, by the way, have a particular significance in Celtic lore as symbols of the soul, so St. Gobnait’s closeness to these busy creatures also has a spiritual significance.   Saint’s best friend? 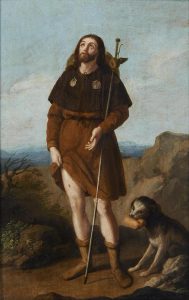 Lastly, we turn to a more traditional human-animal relationship. St. Roch is another saint who was very popular in the Middle Ages. He is usually depicted revealing a wound on his leg and with a dog at his side. St. Roch lived in Italy in the 14th century, during the time when the bubonic plague was ravaging Europe. He devoted himself to the care of plague victims until one day he began to experience symptoms of the disease as well. He withdrew into the forest to die, and there he was visited by a dog which brought him bread and licked his sores until he recovered.   But what, I hear you ask, about those gentle mountain dogs with that holy name, famous for bringing aid to travellers in distress? Surely there must be some story of saintly companionship there? Sadly not. The St. Bernard breed only dates to the 17th century, while their namesake lived in the 11th. St. Bernard of Montjoux (or Menthon) founded two hostels in dangerous passes of the Alps regularly used by pilgrims to Rome. These passes came to be known as the Great St. Bernard Pass and the Little St. Bernard Pass. The monks who have maintained the hostels since that day eventually enlisted the aid of dogs to help them look after travellers who lose their way on the treacherous and snowy paths. Naturally, this new breed came to be called the St. Bernard, and considering the work they have done in saving countless lives, that name seems well deserved. 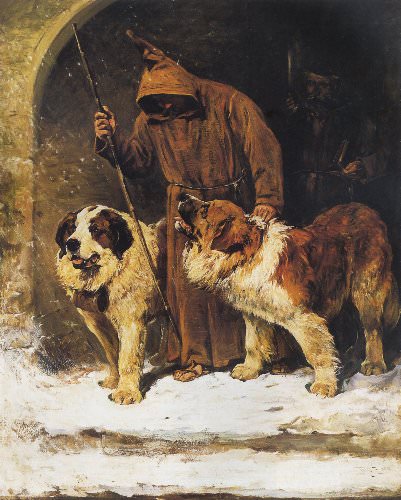