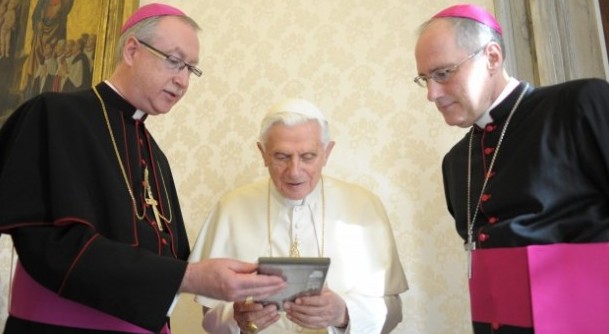 During their meeting with Pope Benedict XVI in his apartment on Saturday morning, November 10, CCCB President Archbishop Richard Smith (Edmonton) and Vice President Paul-André Durocher (Gatineau) presented to the Holy Father a copy of Salt and Light's newest documentary on St. Kateri Tekakwitha and a beatufully framed facsimile (true reproduction) of a page of the 17th century Jesuit biography of Kateri Tekakwitha.

The inscription on the frame reads: This document is a reproduction of the opening page of the autograph biography of Kateri Tekakwitha by her confessor, Father Claude Chauchetière, S.J.

The original is kept in Montreal at the Archive of the Jesuits in Canada. Presented to His Holiness Pope Benedict XVI by the Canadian Conference of Catholic Bishops on November 10, 2012, in thanksgiving for the canonization of Saint Kateri Tekakwitha. --- Archbishop Richard Smith (L) and Archbishop Paul Andre Durocher (R) present Pope Benedict XVI with a DVD of Salt + Light's latest documentary film, "In her footsteps" about St. Kateri Tekakwitha Photo courtesy of L'Osservatore Romano