Presentation of Gifts of Pope Francis at Ecumenical Patriarchate 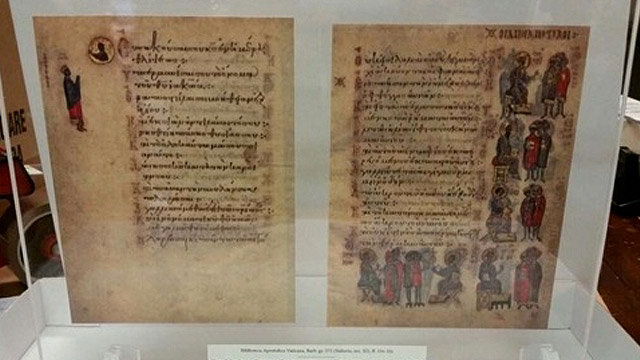 Pope Francis has presented these gifts during his visit to the Ecumenical Patriarchate in Phanar: Gift of the Holy Father to the Holy Synod of the Ecumenical Patriarchate The two sheets reproduced in facsimile belong to the Greek Barberinian manuscript 372 of the Vatican Apostolic Library. The original (mm. 223 x 168), in parchment, composed of 273 sheets, dates back to approximately 1060 and contains the Psalter, in addition to some liturgical readings taken from the Book of the Gospels, odes from the Old and New Testament, and texts of poetry added later, that attest to a later use of the manuscript for private devotion or liturgical celebration. It is written in 'Perlschrift' calligraphy by the scribe and chrysographer Theodore of Caesarea, protopresbyter of the Monastery of Study in Constantinople, to whom the text in brown ink and the titles in gold can be attributed, while the miniatures that appear in the text can be attributed to various miniaturists and were in part successively retouched or restored. It is one of the most renown Byzantine Psalters with marginal illustrations. The text of Psalm 18 [The heavens declare the glory of God] (ff. 32r-33r) appears on the two duplicate sheets, and the Incipit of the successive psalm (f. 33v); the fifth verse [Their voice goes out through all the earth and their words to the end of the world] of Psalm 18 is illustrated by the series of the Apostles, each one of whom is depicted seated while speaking to a group of people. The choice of such iconography refers to a Pauline quotation of this verse (Rm 10,18). The following psalm instead features David. In the 17th Century the manuscript was given to Cardinal Francesco Boncompagni; it later belonged to the Barberini family, from whom it was bought, together with the rest of the library, by the Vatican Library in 1902. 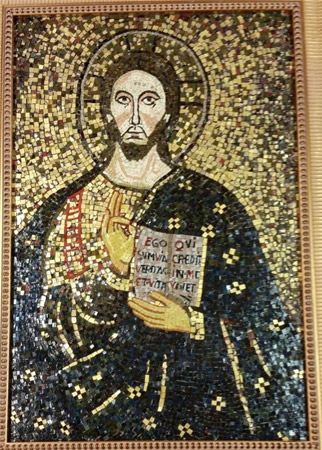 Gift of the Holy Father 'Christ in the Niche of the Pallio' presented to Ecumenical Patriarch Bartholomew  The mosaic is taken from the image of Christ depicted in the Confession of St. Peter, that is of his tomb, where the Sacred Pallia are kept, under the papal altar of St. Peter‚s Basilica. The mosaic is originally attributed to the Ninth Century and some parts of it are retraceable to this period, for example the face, while other parts prove to have been successively altered. This image is certainly a representative element of the Constantinian Basilica, which has since remained in its original place. It is the Christ, blessing and Teacher, while holding out the Book of the Gospel open at the words: "Ego Sum Via Veritas Et Vita Qui Credit in Me Vivet" The picture, 60 X 40 cm, was made by the mosaicists of the Vatican Mosaic Workshop from January to March 2014 with polychrome enamels and gilded tesserae, applied with soft stucco on a metallic base. The stucco is of the same composition as that utilized in the past centuries to apply mosaics in St. Peter's Basilica. In crafting the mosaic, the traditional technique of cut mosaics was implemented.