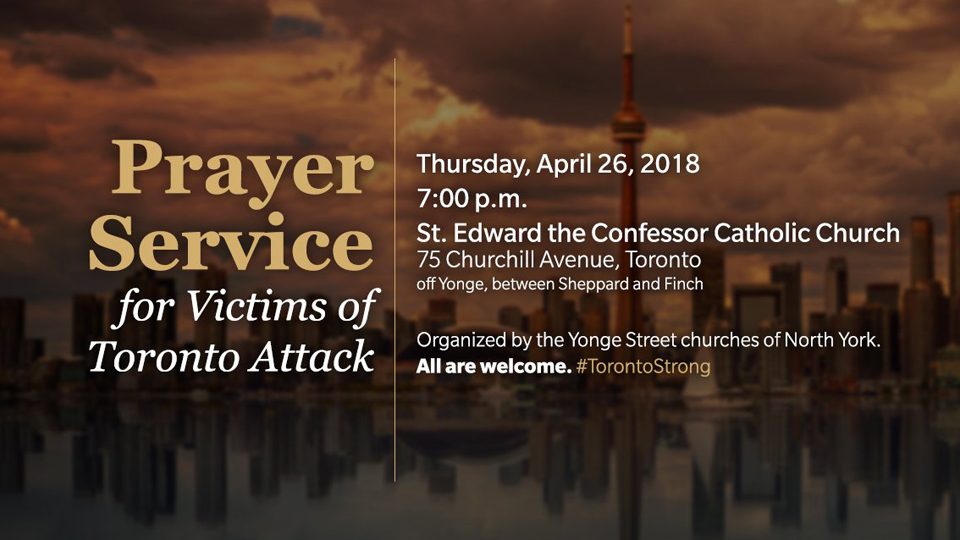 MEDIA ADVISORY:
Prayer Service Thursday for Victims of Toronto Van Attack. Yonge Street churches in North York – steps away from violent acts – gather to pray for victims
TORONTO (April 26, 2018) Following terrifying violence earlier this week in North York that left 10 dead and 14 injured, churches in the neighbourhood are inviting the community to gather to pray for comfort, peace and to remember the victims of violence.

An ad hoc group of faith leaders from North York are planning the prayer service, which is open to all and will include participation from numerous faith expressions. Media are welcome to attend.
Where: St. Edward the Confessor Catholic Church – 75 Churchill Ave. ? (off Yonge St., between Sheppard Ave. and Finch Ave.)
When: Thursday, April 26, 2018 - 7 p.m.
Who: There are numerous churches in the vicinity surrounding the area where Monday’s violent attack occurred. These include Catholic, Lutheran, Anglican, United and Presbyterian places of worship. Faith leaders representing these communities will lead the service. All are welcome.
The Archdiocese of Toronto is Canada’s largest diocese, stretching from Toronto north to Georgian Bay and from Oshawa to Mississauga. It is home to 2 million Catholics and 225 churches, with Mass celebrated in more than 30 languages each week.