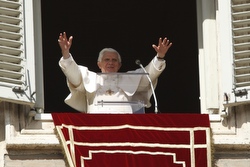 A 8.8 magnitude earthquake hit the South American nation on Saturday.  At least 700 have been killed, half-a-million homes destroyed, and 1.5 million people affected. "My thought goes out to Chile and the populations affected by the earthquake, which caused numerous losses of human life and much damage," said the Pontiff, "I pray for the victims and am spiritually near to the persons tried by so grave a calamity; for them I implore from God relief from suffering and courage in these adversities," He added: "I am certain that they will not lack the solidarity of many, especially of ecclesial organizations." The charitable arm of the Catholic Church, Caritas Internationalis, has set in motion aid relief for Chile.  Read more about that HERE on Caritas' website. Noting recent attacks on Christians in Mosul, the Pontiff also appealed to civil authorities in Iraq to protect religious minorities.  He shared that during last week's spiritual retreat he was praying for persecuted Christians in that region: "... I would like to join myself spiritually in prayer for peace and the restoration of security promoted by the council of bishops at Nineveh. I am affectionately near to the Christians communities of the whole country. Do not weary of being a ferment for good for the homeland to which, for centuries, you have rightfully belonged!" He added: "I exhort the international community to do its best to give the Iraqis a future of reconciliation and justice, while I ask with confidence from God almighty the precious gift of peace." In addition to keeping Chile and the Christians in Iraq in our prayers, there are also the Papal Intentions for March, which focus on the economy and Africa. The Holy Father's general intention is:  That the world economy may be managed according to the principles of justice and equity, taking account of the real needs of peoples, especially the poorest. His missionary intention is: That the Churches in Africa may be signs and instruments of reconciliation and justice in every part of that continent. - CNS photo/Paul Haring