Pope in Japan: Message of peace in Hiroshima 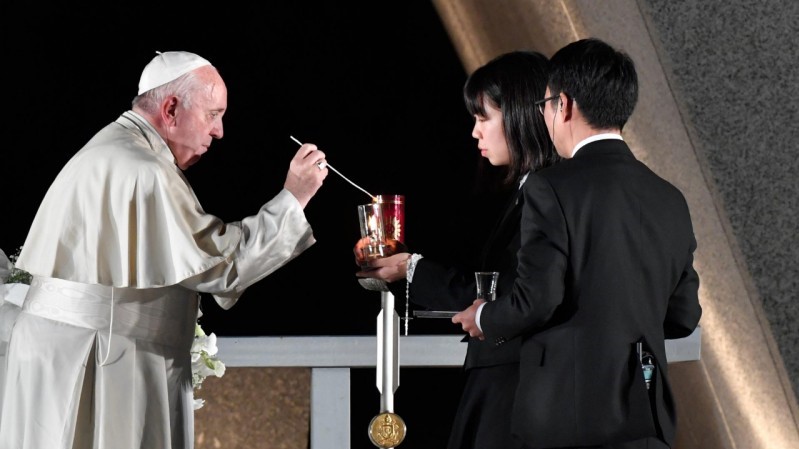 Pope Francis lights a candle during a meeting for peace at the Hiroshima Peace Memorial in Japan on November 24, 2019 (Vatican Media)

Pope Francis' address during the meeting for peace

“For love of my brethren and friends, I say: Peace upon you!” (Ps 122:8). God of mercy and Lord of history, to you we lift up our eyes from this place, where death and life have met, loss and rebirth, suffering and compassion. Here, in an incandescent burst of lightning and fire, so many men and women, so many dreams and hopes, disappeared, leaving behind only shadows and silence.  In barely an instant, everything was devoured by a black hole of destruction and death.  From that abyss of silence, we continue even today to hear the cries of those who are no longer.  They came from different places, had different names, and some spoke different languages.  Yet all were united in the same fate, in a terrifying hour that left its mark forever not only on the history of this country, but on the face of humanity. Here I pay homage to all the victims, and I bow before the strength and dignity of those who, having survived those first moments, for years afterward bore in the flesh immense suffering, and in their spirit seeds of death that drained their vital energy. I felt a duty to come here as a pilgrim of peace, to stand in silent prayer, to recall the innocent victims of such violence, and to bear in my heart the prayers and yearnings of the men and women of our time, especially the young, who long for peace, who work for peace and who sacrifice themselves for peace.  I have come to this place of memory and of hope for the future, bringing with me the cry of the poor who are always the most helpless victims of hatred and conflict. 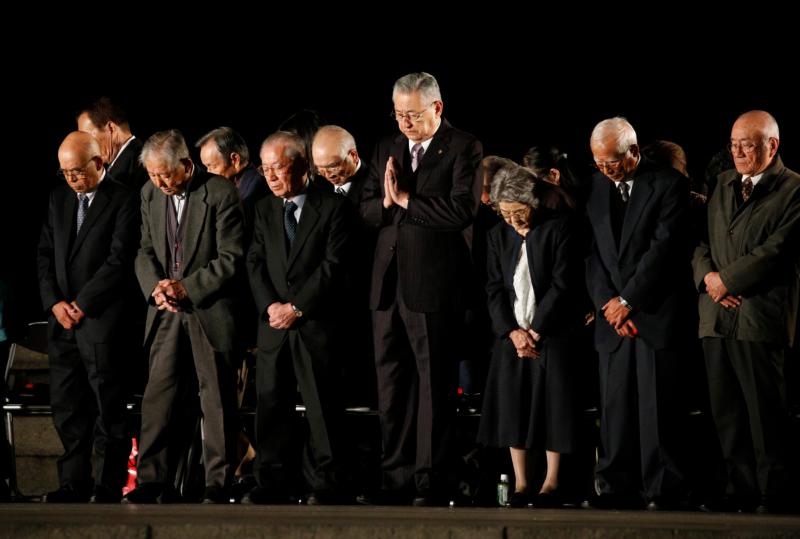 Victims of the 1945 atomic bombing observe a moment of silence during a meeting for peace led by Pope Francis at the Hiroshima Peace Memorial in Hiroshima, Japan, on November 24, 2019 (CNS photo/Paul Haring)
It is my humble desire to be the voice of the voiceless, who witness with concern and anguish the growing tensions of our own time: the unacceptable inequalities and injustices that threaten human coexistence, the grave inability to care for our common home, and the constant outbreak of armed conflict, as if these could guarantee a future of peace. With deep conviction I wish once more to declare that the use of atomic energy for purposes of war is today, more than ever, a crime not only against the dignity of human beings but against any possible future for our common home.  The use of atomic energy for purposes of war is immoral, just as the possessing of nuclear weapons is immoral, as I already said two years ago.  We will be judged on this.  Future generations will rise to condemn our failure if we spoke of peace but did not act to bring it about among the peoples of the earth.  How can we speak of peace even as we build terrifying new weapons of war?  How can we speak about peace even as we justify illegitimate actions by speeches filled with discrimination and hate? I am convinced that peace is no more than an empty word unless it is founded on truth, built up in justice, animated and perfected by charity, and attained in freedom (cf. SAINT JOHN XXIII, Pacem in Terris, 37). Building peace in truth and justice entails acknowledging that “people frequently differ widely in knowledge, virtue, intelligence and wealth” (ibid., 87), and that this can never justify the attempt to impose our own particular interests upon others.  Indeed, those differences call for even greater responsibility and respect. Political communities may legitimately differ from one another in terms of culture or economic development, but all are called to commit themselves to work “for the common cause”, for the good of all (ibid., 88). Indeed, if we really want to build a more just and secure society, we must let the weapons fall from our hands.  “No one can love with offensive weapons in their hands” (SAINT PAUL VI, United Nations Address, 4 October 1965, 10).  When we yield to the logic of arms and distance ourselves from the practice of dialogue, we forget to our detriment that, even before causing victims and ruination, weapons can create nightmares; “they call for enormous expenses, interrupt projects of solidarity and of useful labour, and warp the outlook of nations” (ibid.).  How can we propose peace if we constantly invoke the threat of nuclear war as a legitimate recourse for the resolution of conflicts?  May the abyss of pain endured here remind us of boundaries that must never be crossed.  A true peace can only be an unarmed peace.  For “peace is not merely the absence of war... but must be built up ceaselessly” (Gaudium et Spes, 78).  It is the fruit of justice, development, solidarity, care for our common home and the promotion of the common good, as we have learned from the lessons of history. 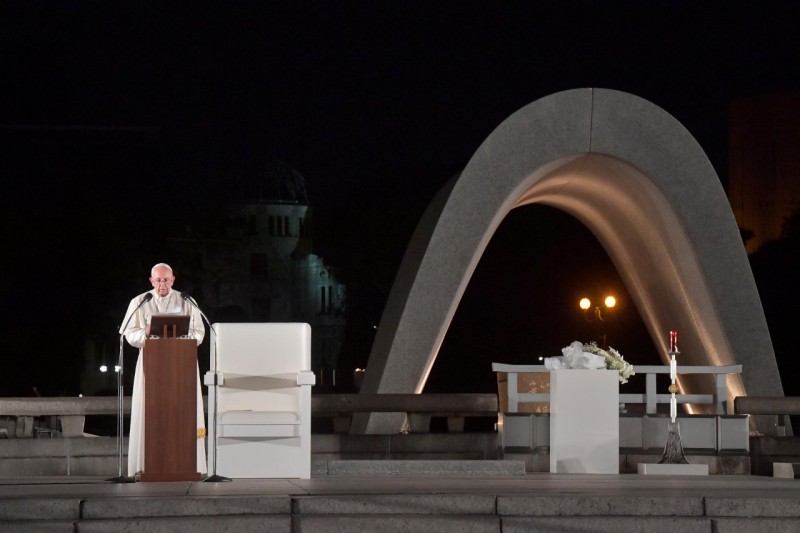 Pope Francis delivers his address during a meeting for peace at the Hiroshima Peace Memorial in Hiroshima, Japan, on November 24, 2019 (Vatican Media)
To remember, to journey together, to protect.  These are three moral imperatives that here in Hiroshima assume even more powerful and universal significance, and can open a path to peace.  For this reason, we cannot allow present and future generations to lose the memory of what happened here.  It is a memory that ensures and encourages the building of a more fair and fraternal future; an expansive memory, capable of awakening the consciences of all men and women, especially those who today play a crucial role in the destiny of the nations; a living memory that helps us say in every generation: never again! That is why we are called to journey together with a gaze of understanding and forgiveness, to open the horizon to hope and to bring a ray of light amid the many clouds that today darken the sky.  Let us open our hearts to hope, and become instruments of reconciliation and peace.  This will always be possible if we are able to protect one another and realize that we are joined by a common destiny.  Our world, interconnected not only by globalization but by the very earth we have always shared, demands, today more than ever, that interests exclusive to certain groups or sectors be left to one side, in order to achieve the greatness of those who struggle co-responsibly to ensure a common future. In a single plea to God and to all men and women of good will, on behalf of all the victims of atomic bombings and experiments, and of all conflicts, let us together cry out from our hearts: Never again war, never again the clash of arms, never again so much suffering!  May peace come in our time and to our world.  O God, you have promised us that “mercy and faithfulness have met, justice and peace have embraced; faithfulness shall spring from the earth, and justice look down from heaven” (Ps 84:11-12). Come, Lord, for it is late, and where destruction has abounded, may hope also abound today that we can write and achieve a different future.  Come, Lord, Prince of Peace!  Make us instruments and reflections of your peace! “For love of my brethren and friends, I say: Peace upon you!” (Ps 122:8). Text courtesy of Libreria Editrice Vaticana (click here for original source)