Pope Francis in Cyprus: Meeting with the Holy Synod 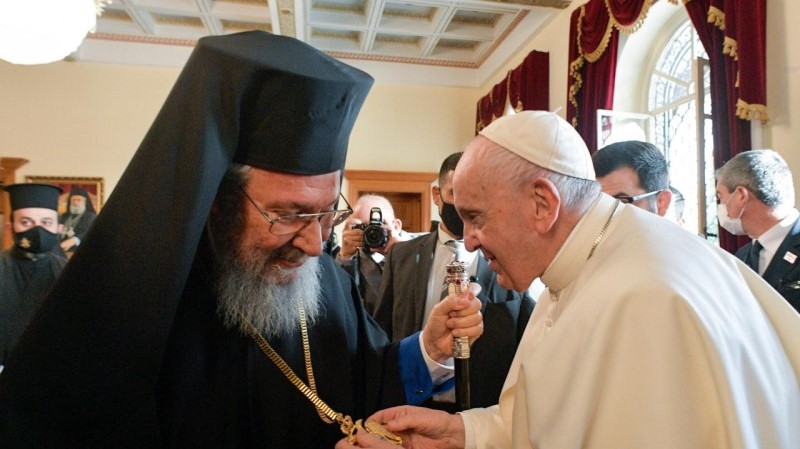 On the second day of his two-day apostolic visit to Cyprus, Pope Francis met with His Beatitude Chrysostomos II, the Orthodox Archbishop of Cyprus, after which he met with the bishops of the Holy Synod of the Cypriot Orthodox Church, the highest Orthodox Christian authority in Cyprus. Below is the full text of his address to them on this occasion:

Your Beatitudes, Dear Bishops of the Holy Synod, I am pleased to be with you and I am grateful for your cordial welcome. Thank you, dear Brother, for your kind words, for your openness of heart and commitment to promoting dialogue between us. I wish to extend my greetings to the priests and deacons, and to the faithful of the Orthodox Church of Cyprus, with a particular thought for the monks and nuns, who by their prayer purify and elevate the faith of all. The grace of being here reminds me that we have a common apostolic origin: Paul traversed Cyprus and went on to Rome. We are thus heirs of the same apostolic zeal, and a single path joins us, that of the Gospel. I like to see us advancing on that same path, seeking ever greater fraternity and full unity. In this portion of the Holy Land, that spreads the grace of its sacred places throughout the Mediterranean, we naturally think back to many pages and personalities of the Bible. Among all of them, I would like to speak once more of Saint Barnabas, and to reflect on certain aspects of his life that can guide us on our journey. “Joseph, to whom the apostles gave the name Barnabas” (Acts 4:36). This is what the Acts of the Apostles tell us. We know and venerate Barnabas through his surname, which aptly describes his personality. The name “Barnabas” means both “son of consolation” and “son of exhortation”. It is fitting he combines both these characteristics, which are indispensable for the proclamation of the Gospel. True consolation cannot remain private, but must find expression in exhortation and guide freedom towards goodness. At the same time, all exhortation in the faith must necessarily be grounded in the consoling presence of God and accompanied by fraternal charity. In this way, Barnabas, son of consolation, exhorts us, his brethren, to undertake the same mission of bringing the Gospel to humanity; he asks us to realize that the message cannot be based only on generic exhortations, the inculcation of precepts and rules to be followed, as often has been the case. Rather, it must follow the path of personal encounter, be attentive to people’s questions, to their existential needs. If we are to be sons of consolation, even before we say a word, we need to listen, to let ourselves be questioned, to discover others, to share. Because the Gospel is not handed on by communication, but by communion. It is this that we Catholics want to experience in the next few years, as we rediscover the synodal dimension essential to being Church. In this, we feel the need to walk more closely alongside you, dear brethren, who, through your experience of synodality, can truly help us. Thank you for your fraternal cooperation, manifested also in active participation in the International Mixed Commission for Theological Dialogue between the Catholic Church and the Orthodox Church. 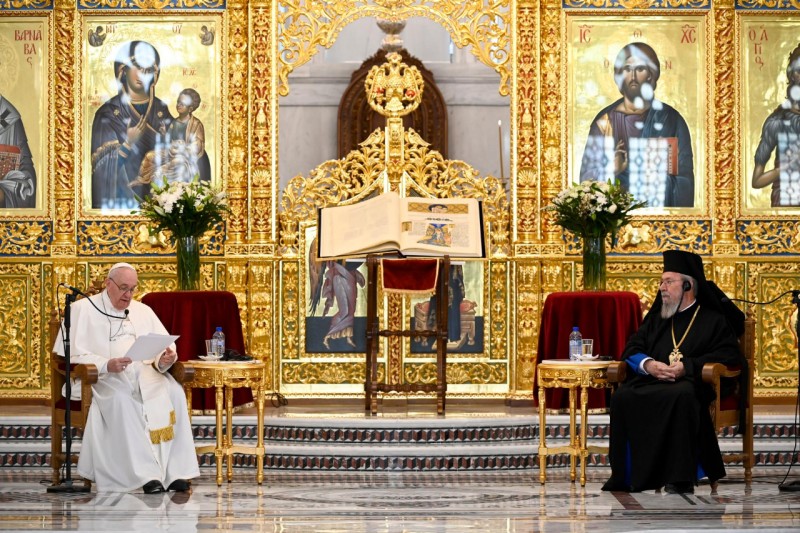 Pope Francis meets with the Holy Synod of the Cypriot Orthodox Church at the Orthodox Cathedral in Nicosia on December 3, 2021, during his apostolic visit to Cyprus. Photo courtesy of Vatican Media.
It is my heartfelt hope that there will be increased opportunities for encounter, for coming to know one another better, for eliminating preconceptions and for listening with docility to our respective experiences of faith. This will prove for each of us an exhortation and incentive to do better, and bring a spiritual fruit of consolation. The apostle Paul, from whom we descend, speaks often of consolation, and it is pleasant to think that Barnabas, the son of consolation, was the inspiration for some of his words. Like those with which, at the beginning of the Second Letter to the Corinthians, Paul urges to us to console one another with the same consolation with which we have been consoled by God (cf. 2 Cor 1:3-5). In this sense, dear brethren, I wish to assure you of my own prayer and closeness, and that of the Catholic Church, in the most troubling problems that beset you and in the best and boldest hopes that spur you on. Your sorrows and your joys are also ours; we sense them as our own. At the same time, we feel great need of your prayers. The Acts of the Apostles also – and here is a second aspect – present Saint Barnabas as “a Levite, a native of Cyprus” (4:32). The text adds no other details, either about his appearance or his person, but immediately shows us what kind of man Barnabas was by one of his actions: “he sold a field that belonged to him, then brought the money, and laid it at the apostles’ feet” (v. 37). This splendid gesture suggests that, in order to be revitalized in communion and mission, we too need to have the courage to divest ourselves of all that, however precious, is earthly, in order to favour the fullness of unity. Clearly, I am not speaking of what is sacred and helps us to encounter the Lord, but of the risk of absolutizing certain customs and habits that do not require uniformity and assent on the part of all. Let us not become paralyzed by fear of openness or bold gestures, or give in to talk of “irreconcilable differences” that in fact have nothing to do with the Gospel! Let us not permit the “traditions”, in the plural and with a small “t”, to prevail over “Tradition”, in the singular and with a capital “T”. That Tradition bids us imitate Barnabas and leave behind everything, however good, that could compromise the fullness of communion, the primacy of charity and the need for unity. 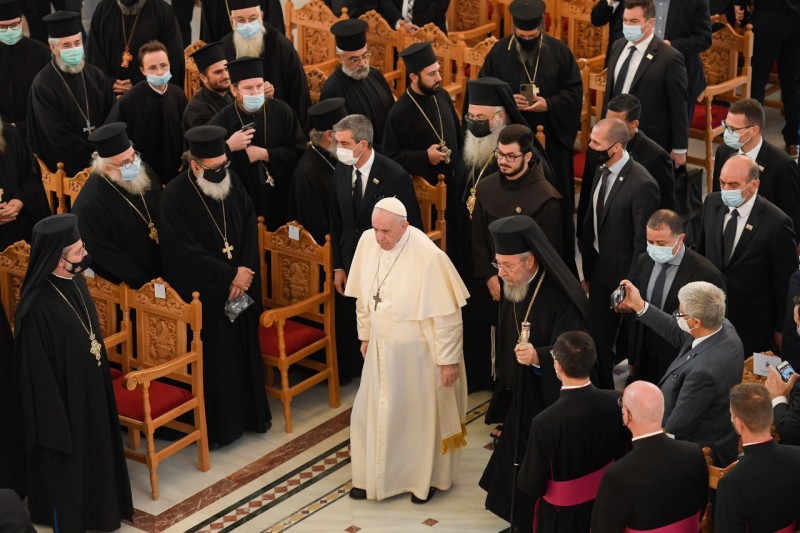 Pope Francis meets with the Holy Synod of the Cypriot Orthodox Church at the Orthodox Cathedral in Nicosia on December 3, 2021, during his apostolic visit to Cyprus. Photo courtesy of Vatican Media.
Laying all he had at the feet of the apostles, Barnabas entered into their heart. We too are asked by the Lord to realize that we are members of the same body and to bow down, even to the feet of our brethren. Certainly, where our relations are concerned, history has opened broad furrows between us, but the Holy Spirit desires that with humility and respect we once more draw close to one another. He invites us not to grow resigned to our past divisions and to cultivate together the field of the kingdom with patience, perseverance and concrete gestures. For if we set aside abstract concepts and cooperate, for example in works of charity, education and the promotion of human dignity, we will rediscover our fraternity, and communion will mature by itself, to the praise of God. Each will maintain his own customs and identity, but in time, our joint efforts will increase concord and bear fruit. Just as these beautiful Mediterranean lands are embellished by respectful and patient human labour, so too, with God’s help and humble perseverance, may we cultivate our apostolic communion! One good fruit, for example, is all that has taken place here in Cyprus at the Church of Panaghia Chryssopolitissa, “Our Lady of the Golden City”, today a place of worship for the various Christian confessions, much loved by the people and often chosen for celebrations of marriage. It is thus a sign of communion in faith and life under the gaze of the Holy Mother of God who gathers her children together. Within the complex is also the column where, according to tradition, Saint Paul received thirty lashes for having proclaimed the faith in Paphos. Mission, like communion, always passes through sacrifices and trials. Precisely one such trial – and this is the third aspect that I would draw from the figure of Barnabas – is associated with the initial spread of the Gospel in this land. Upon his return to Cyprus with Paul and Mark, Barnabas found Elymas, “a magician and false prophet” (Acts 13:6), who maliciously opposed them, seeking to make crooked the straight paths of the Lord (cf. vv. 8, 10). Today too, there is no lack of falsehood and deception that the past can set before us to hinder our journey. Centuries of division and separation have made us assimilate, even involuntarily, hostility and prejudice with regard to one another, preconceptions often based on scarce and distorted information, and spread by an aggressive and polemical literature. This too makes crooked the path of God, which is straight and directed to concord and unity. Dear brethren, the holiness of Barnabas speaks eloquently to us as well! How many times in history have we Christians been more concerned to oppose others than to accept docilely the path of God, which leads to resolving disagreements in charity! How many times have we magnified and spread prejudices about others, rather than following the Lord’s own exhortation, so often repeated in the Gospel of Mark, who accompanied Barnabas on this island, to make ourselves small and to serve one another (cf. Mk 9:35; 10:43-44). 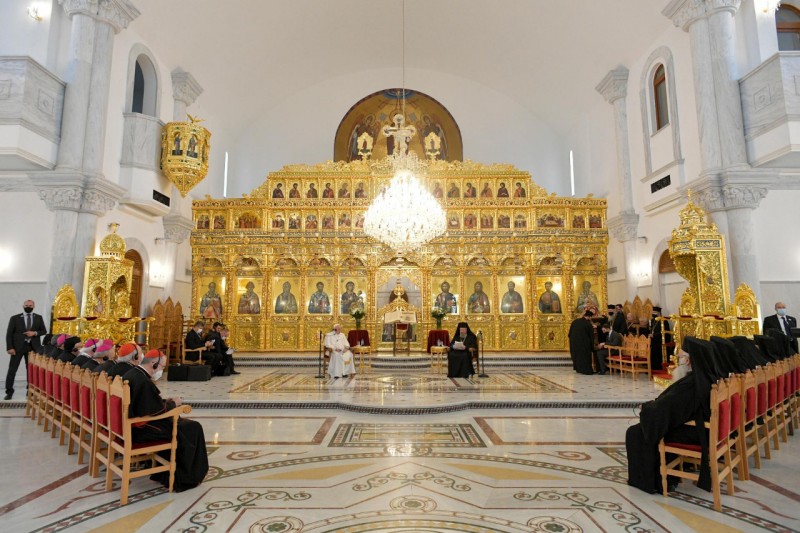 Pope Francis meets with the Holy Synod of the Cypriot Orthodox Church at the Orthodox Cathedral in Nicosia on December 3, 2021, during his apostolic visit to Cyprus. Photo courtesy of Vatican Media.
Your Beatitude, today, in our dialogue, I was moved when you spoke of the Church as Mother. Our Church is a mother, and a mother always gathers her children with tender love. We have trust in this Mother Church, which gathers all of us and, with patience, tender love and courage, makes us advance in the way of the Lord. Yet to feel the motherhood of the Church, all of us have to go there, where the Church is a mother. All of us, with our differences, but all children of Mother Church. Thank you for that reflection that you shared with me today. Let us ask the Lord to grant us the wisdom and courage to follow his ways, not our own. Let us ask this through the intercession of the saints. Leontios Machairas, a fifteenth-century chronicler, defined Cyprus as a “Holy Island” because of the great number of martyrs and confessors that these lands have known over the centuries. In addition to those known and venerated, like Barnabas, Paul and Mark, Epiphanius, Barbara and Spyridon, there are many, many others: countless ranks of saints who, united in the one heavenly Church – the Mother Church – urge us to sail together towards that harbour to which we all aspire. From on high, they encourage us to make of Cyprus, already a bridge between East and West, a bridge between heaven and earth. So be it, to the praise of the Most Holy Trinity, for our good and for the good of all. Thank you. Text courtesy of Libreria Editrice Vaticana