Pope Francis in Cyprus: Meeting with authorities, civil society, and the diplomatic corps 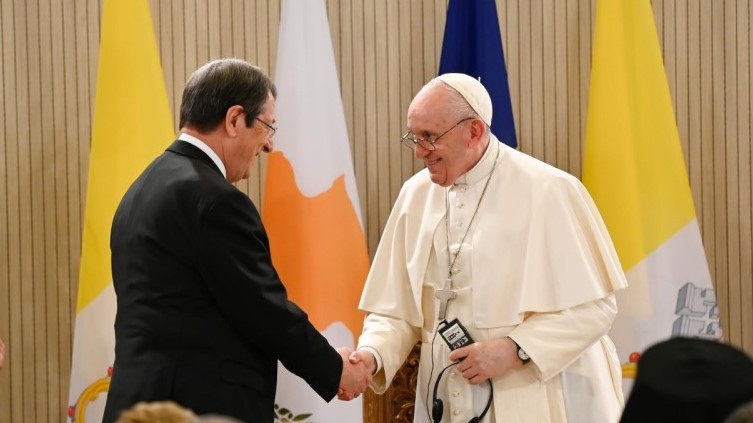 On the first day of his apostolic visit to the divided island nation of Cyprus, Pope Francis was received at the Presidential Palace in Nicosia, the country's capital. After a private visit with President Nicos Anastasiades, the Holy Father met with authorities, civil society, and the diplomatic corps. Below is the full text of the address he delivered on this occasion:

“Ceremonial Hall” of the Presidential Palace in Nicosia Thursday, 2 December 2021

Mr President of the Republic, Members of Government and of the Diplomatic Corps, Distinguished Religious and Civil Authorities, Illustrious Representatives of Society and the World of Culture, Ladies and Gentlemen, I greet you most cordially and I am most pleased to be present among you. I thank you, Mr President, for the welcome you have offered me in the name of the entire population. I have come as a pilgrim to a country geographically small, but historically great; to an island that down the centuries has not isolated peoples but brought them together; to a land whose borders are the sea; to a place that is the eastern gate of Europe and the western gate of the Middle East. You are an open door, a harbour that unites. Cyprus, as a crossroads of civilizations, has an innate vocation to encounter, favoured by the welcoming character of the Cypriot people. We have just paid homage to the first President of this Republic, Archbishop Makarios, and by that gesture, I wished to render homage to all its citizens. His name, “Makarios”, reminds us of the opening of Jesus’ Sermon on the Mount: the Beatitudes (cf. Mk 5:3-12). Who is makarios, truly blessed, according to the Christian faith to which this land is inseparably bound? Everyone can be blessed, and blessed are above all the poor in spirit, those who have suffered in their lives, those who live in meekness and mercy, all those who without pretense practice justice and are peacemakers.  The Beatitudes, dear friends, are the perennial charter of Christianity. When they are lived out, the Gospel becomes youthful and fills society with fresh hope. The Beatitudes are the compass that, in every latitude, indicates the routes that Christians must take in the voyage of life. 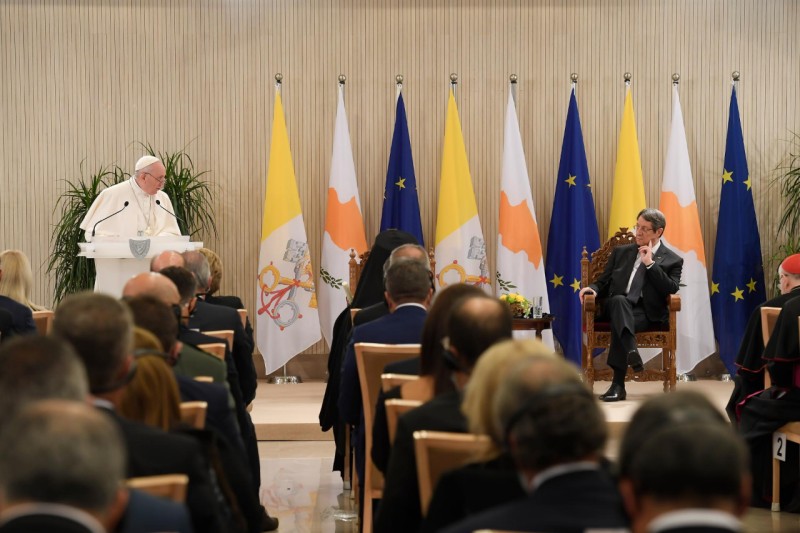 Pope Francis addresses authorities, civil society, and the diplomatic corps of Cyprus on December 2, 2021, during his apostolic visit. Photo courtesy of Vatican Media.
Precisely from this place, where Europe and the East meet, there began the first great inculturation of the Gospel on this continent. I am deeply moved to be able to retrace the steps of the great missionaries of the early Church, particularly Saints Paul, Barnabas and Mark. So here I am, a pilgrim in your midst, to walk with you, dear Cypriots, all of you, in the desire that the good news of the Gospel may bring from here to Europe a message of joy, under the banner of the Beatitudes. For what the earliest Christians gave to the world with the gentle power of the Spirit was an unprecedented message of beauty. It was the amazing newness of the Beatitudes, addressed to everyone, that won hearts and bestowed freedom upon many. This country has inherited a particular responsibility in that regard, namely, to be a messenger of beauty among the continents. Cyprus radiates a natural beauty that must be protected and preserved by suitable environmental policies, adopted in concert with its neighbours. A beauty that is evident as well in its architecture, its art, especially its sacred art, and its religious crafts, and its many archaeological treasures. To draw an image from the sea all around us, I would even say that this island, small in size, represents a pearl of great price in the heart of the Mediterranean. A pearl in fact becomes what it is, because it takes shape over time. It takes years for its various layers to become compact and give it lustre. So too, the beauty of this land comes from the cultures which over the centuries have met and blended here. Today too, the light of Cyprus is richly variegated. Many peoples and nations have contributed different shades and tints to this people. I think too of the presence of many immigrants: percentagewise, more than any other country of the European Union. To preserve the multicolored and multifaceted beauty of the whole is no easy thing. As in the formation of a pearl, it takes time and patience; it demands a broad vision capable of embracing a variety of cultures and looking to the future with foresight. I think in this regard of the importance of protecting and supporting all the members of society, especially those who are statistically a minority. I think too of the various Catholic agencies that would benefit from a suitable institutional recognition, so that the contribution they make to society through their activities, particularly their educational and charitable works, can be clearly defined from the legal standpoint. A pearl develops its beauty in situations of difficulty. It is born in obscurity, when the oyster “suffers” after experiencing an unexpected threat to its safety, such as a grain of sand that irritates it. To protect itself, it reacts by assimilating the thing that wounded it: it encloses the foreign body that endangers it and makes it into something beautiful: a pearl. The pearl of Cyprus has been darkened by the pandemic, which has prevented many visitors from visiting it and seeing its beauty; here, as in other places, this has aggravated the effects of the financial and economic crisis. In this period of recovery, however, it will not be anxious efforts to recover what was lost that will ensure and consolidate growth, but the commitment to promote the recovery of society, especially through a decisive fight against corruption and everything that violates the dignity of the person; here I think, for example, of the scourge of human trafficking. 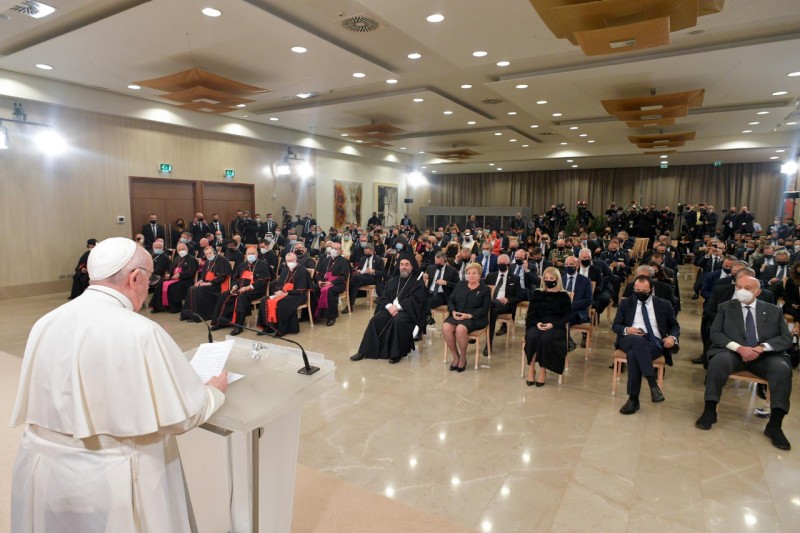 Pope Francis addresses authorities, civil society, and the diplomatic corps of Cyprus on December 2, 2021, during his apostolic visit. Photo courtesy of Vatican Media.
Yet the greatest wound suffered by this land has been the terrible laceration it has endured in recent decades. I think of the deep suffering of all those people unable to return to their homes and their places of worship. I pray for your peace, for the peace of the entire island, and I make it my fervent hope. The way of peace, which reconciles conflicts and regenerates the beauty of fraternity, has a single word as its signpost. That word is dialogue, a word which you, Mr President, have frequently repeated. We ought to help one another to believe in the patient and unassuming power of dialogue, that power of patience, of “carrying on our shoulders”, hypomoné, on the basis of the Beatitudes. We know that it is no easy road; it is long and winding, but there is no other way to achieve reconciliation. Let us nurture hope by the power of gestures, rather than hoping in gestures of power. There is a power of gestures, which prepares the way of peace. Not gestures of power, threats of reprisal and shows of force, but gestures of détente and concrete steps towards dialogue. I think, for example, of openness to sincere discussion that would give priority to people’s needs, ever more effective involvement on the part of the international community, the need to protect the religious and cultural heritage, and the restitution of all that people hold most precious in that regard, such as places or at least sacred furnishings. With this in mind, I would like to express my appreciation and encouragement for the Religious Track of the Cyprus Peace Project, promoted by the Embassy of Sweden, for the cultivation of dialogue among religious leaders. Times that seem least favourable, when dialogue languishes, can be the very times that prepare for peace. The pearl also reminds us of this, for it takes shape in the patient, hidden process of weaving new substances together with the agent that caused the wound. In these circumstances, may hatred not be allowed to prevail, efforts be made to bind up wounds and to keep in mind the situation of those who have disappeared. And when tempted to yield to discouragement, to think of coming generations, who long to inherit a world of peace, cooperation and cohesiveness, not one marred by perennial rivalries and poisoned by unresolved disputes. For this, dialogue is necessary, to avoid the growth of suspicion and resentment. Let us think in this regard of the Mediterranean, now sadly a place of conflicts and humanitarian tragedies; in its profound beauty it is mare nostrum, the sea of all those peoples who border it, in order to be connected, not divided. Cyprus, as a geographic, historical, cultural and religious crossroads, is in a position to be a peacemaker. May it be a workshop of peace in the Mediterranean. 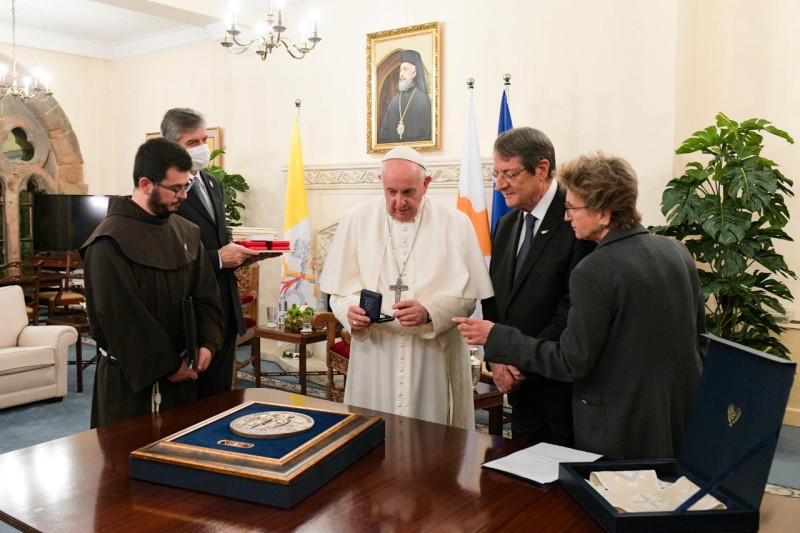 Pope Francis and President Nikos Anastasiades of Cyprus exchange gifts during a meeting at the Presidential Palace in Nicosia on December 2, 2021. Photo courtesy of Vatican Media.
Peace is not often achieved by great personalities, but by the daily determination of ordinary men and women. The European continent needs reconciliation and unity; it needs courage and enthusiasm, if it is to move forward. For it will not be the walls of fear and the vetoes dictated by nationalist interests that ensure its progress, nor will economic recovery alone serve to guarantee its security and stability. May we look to the history of Cyprus to see how encounter and welcome have brought forth good fruits that endure. Not only in the history of Christianity, for which Cyprus was “the springboard” on this continent, but also for the building of a society which found its richness in integration. This spirit of enlargement, this ability to look beyond one’s own borders, brings rejuvenation and makes possible the rediscovery of a brilliance that was lost. The Acts of the Apostles speak of Cyprus, telling us that Paul and Barnabas “traversed the whole island” in order to reach Paphos (cf. Acts 13:6). I rejoice, in these days, that I can traverse the history and spirit of this land, in the desire that its yearning for unity and its message of beauty will continue to guide its journey towards the future. [In Greek:] May God bless Cyprus! Text courtesy of Libreria Editrice Vaticana