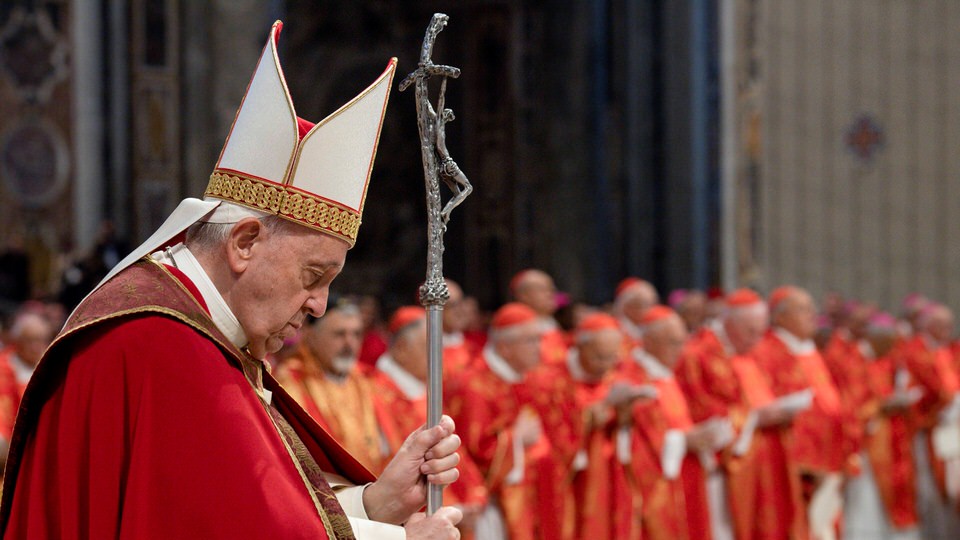 Pope Francis listens as a deacon proclaims the Gospel during Mass in St. Peter's Basilica at the Vatican June 29, 2022, for the feast of Sts. Peter and Paul. (CNS photo/Vatican Media)

On June 29, 2022, the Solemnity of Saints Peter and Paul was celebrated in St. Peter's Basilica in the Vatican with a Mass in which Pope Francis presided over the Liturgy of the Word and Cardinal Giovanni Battista Re, dean of the College of Cardinals, presided over the Liturgy of the Eucharist, due to the Holy Father's ongoing mobility issues. As well as many bishops, cardinals, and members of the lay faithful, the Mass was attended by a delegation of the Ecumenical Patriarchate led by Archbishop Job of Telmessos, permanent representative of the Ecumenical Patriarchate to the World Council of Churches and co-president of the Joint International Commission for Theological Dialogue Between the Catholic Church and the Oriental Orthodox Churches. As is traditional on this day, Pope Francis also blessed the pallia – the archbishop's symbol of office – for all the metropolitan archbishops newly created during the previous year. Read the full text of the Holy Father's homily below:

Holy Mass and Blessing of the Sacred Pallium for the New Metropolitan Archbishops on the Solemnity of Saints Peter and Paul, Apostles Wednesday, 29 June 2022

The testimony given by the two great Apostles Peter and Paul today comes to life once more in the Church’s liturgy. Peter, imprisoned by King Herod, is told by an angel of the Lord: “Get up quickly” (Acts 12:7), while Paul, looking back on his entire life and apostolate says: “I have fought the good fight” (2 Tim 4:7). Let us reflect on these two phrases – “get up quickly” and “fight the good fight” – and ask what they have to say to today’s Christian community, engaged in the synodal process. First, the Acts of the Apostles tell us of the night that Peter was freed from the chains of prison. An angel of the Lord tapped him on the side as he was sleeping, “and woke him, saying, ‘get up quickly’” (Acts 12:7). The angel awakens Peter and tells him to get up. The scene reminds us of Easter, because it contains two verbs present in the accounts of the resurrection: awaken and get up. In effect, the angel awakens Peter from the sleep of death and urges him to get up, to rise and set out towards the light, letting himself be guided by the Lord in passing through all the closed doors along the way (cf. v. 10). This image has great meaning for the Church. We too, as disciples of the Lord and the Christian community, are called to get up quickly, to enter into the mystery of the resurrection, and to let the Lord guide us along the paths that he wishes to point out to us. Still, we experience many inward forms of resistance that prevent us from setting out. At times, as Church, we are overcome by laziness; we prefer to sit and contemplate the few sure things that we possess, rather than getting up and looking to new horizons, towards the open sea. Often we are like Peter in chains, imprisoned by our habits, fearful of change and bound to the chains of our routine. This leads quietly to spiritual mediocrity: we run the risk of “taking it easy” and “getting by”, also in our pastoral work. Our enthusiasm for mission wanes, and instead of being a sign of vitality and creativity, ends up appearing tepid and listless. Then, the great current of newness and life that is the Gospel becomes in our hands – to use the words of Father de Lubac – a faith that “falls into formalism and habit…, a religion of ceremonies and devotions, of ornaments and vulgar consolations… a Christianity that is clerical, formalistic, anemic and callous” (The Drama of Atheist Humanism). 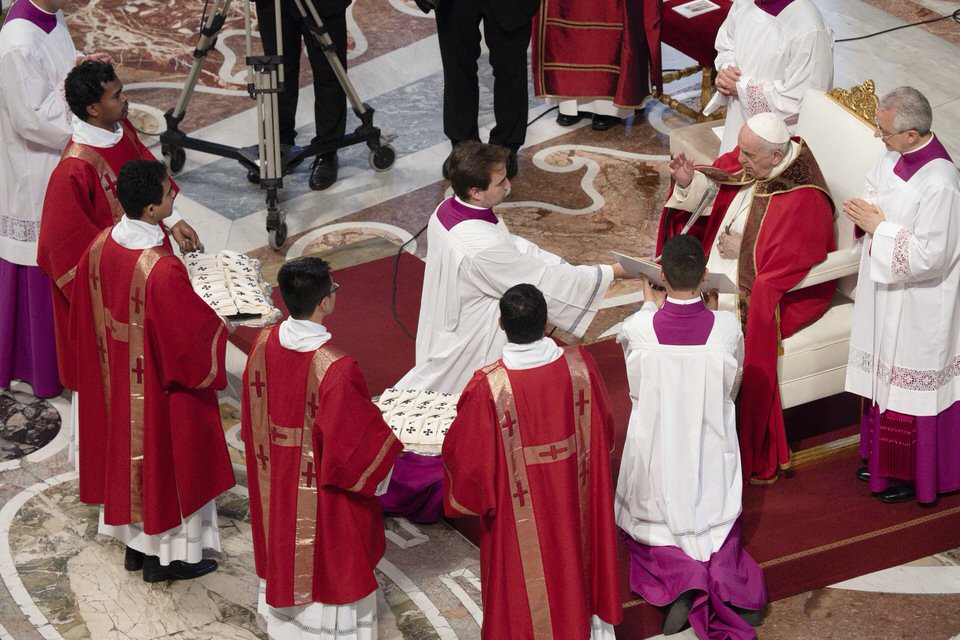 Pope Francis blesses palliums that deacons hold on trays during Mass June 29, 2022, in St. Peter's Basilica at the Vatican. The pope blesses the palliums, woolen stoles archbishops wear around their shoulders, during Mass each year on the feast of Sts. Peter and Paul. (CNS photo/Vatican Media)
The Synod that we are now celebrating calls us to become a Church that gets up, one that is not turned in on itself, but capable of pressing forward, leaving behind its own prisons and setting out to meet the world, with the courage to open doors. That same night, there was another temptation (cf. Acts 12:12-17): that young girl so taken aback that, instead of opening the door, went back to tell what seemed like a dream. Let us open the door. The Lord calls. May we not be like Rhoda who turned back. A Church without chains and walls, in which everyone can feel welcomed and accompanied, one where listening, dialogue and participation are cultivated under the sole authority of the Holy Spirit. The Church that is free and humble, that “gets up quickly” and does not temporize or dilly-dally before the challenges of the present time. A Church that does not linger in its sacred precincts, but is driven by enthusiasm for the preaching of the Gospel and the desire to encounter and accept everyone. Let us not forget that word: everyone. Everyone! Go to crossroads and bring everyone, the blind, the deaf, the lame, the sick, the righteous and the sinner: everyone! This word of the Lord should continue to echo in our hearts and minds: in the Church there is a place for everyone. Many times, we become a Church with doors open, but only for sending people away, for condemning people. Yesterday one of you said to me “This is no time for the Church to be sending away, it is the time to welcome”. “They did not come to the banquet…” – so go to the crossroads. Bring everyone, everyone! “But they are sinners…” – Everyone! In the second reading, we hear the words of Paul who, looking back on his whole life, says: “I have fought the good fight” (2 Tim 4:7). The Apostle is referring to the countless situations, some marked by persecution and suffering, in which he did not spare himself in preaching the Gospel of Jesus. Now at the end of his life, he sees that a great “fight” is still taking place in history, since many are not disposed to accept Jesus, preferring to pursue their own interests and follow other teachers, more accommodating, easier, more to our liking. Paul has fought his own battles and, now that he has run his race, he asks Timothy and the brethren of the community to carry on his work with watchful care, preaching and teaching. Each, in a word, is to accomplish the mission he or she has received; each must do his or her part. 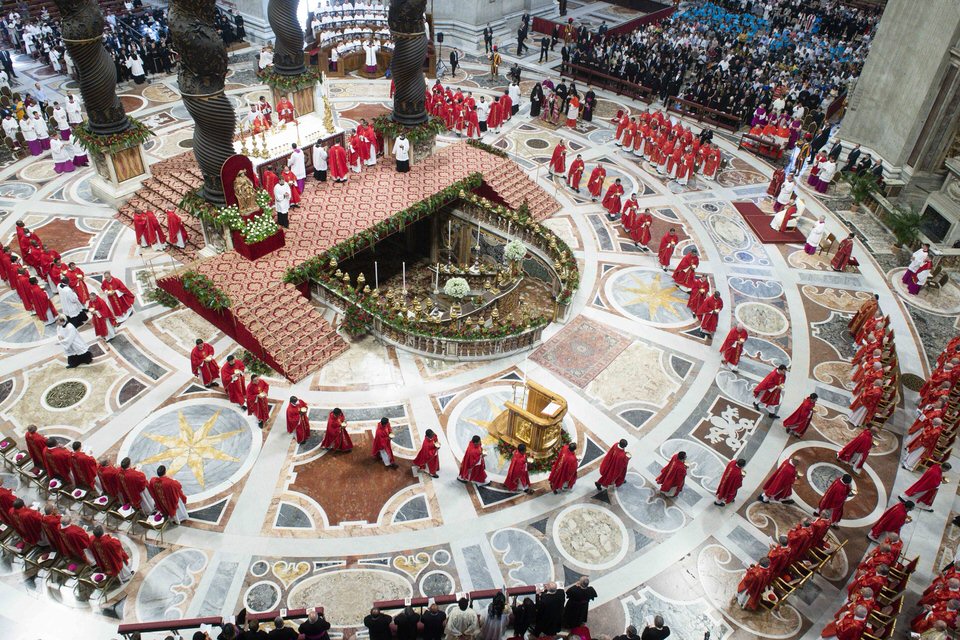 Pope Francis celebrates Mass June 29, 2022, in St. Peter's Basilica at the Vatican. The pope blesses the palliums, woolen stoles archbishops wear around their shoulders, during Mass each year on the feast of Sts. Peter and Paul. (CNS photo/Vatican Media)
Paul’s exhortation is also a word of life for us; it makes us realize that, in the Church, all of us are called to be missionary disciples and to make our own contribution. Here two questions come to my mind. The first is: What can I do for the Church? Not complaining about the Church, but committing myself to the Church. Participating with passion and humility: with passion, because we must not remain passive spectators; with humility, because being committed within the community must never mean taking centre stage, considering ourselves better and keeping others from drawing near. That is what a synodal Church means: everyone has a part to play, no individual in the place of others or above others. There are no first or second class Christians; everyone has been called. Participating also means carrying on “the good fight” of which Paul speaks. For it is a “fight”, since the preaching of the Gospel is never neutral – may the Lord free us from watering down the Gospel to make it neutral – it is never neutral, it does not leave things the way they are; it accepts no compromise with the thinking of this world, but instead lights the fire of the kingdom of God amid the reign of human power plays, evil, violence, corruption, injustice and marginalization. Ever since Jesus rose from the dead, and became the watershed of history, “there began a great fight between life and death, between hope and despair, between being resigned to the worst and struggling for the best. A fight that will know no truce until the definitive defeat of all the powers of hatred and destruction (C.M. MARTINI, Easter Homily, 4 April 1999). 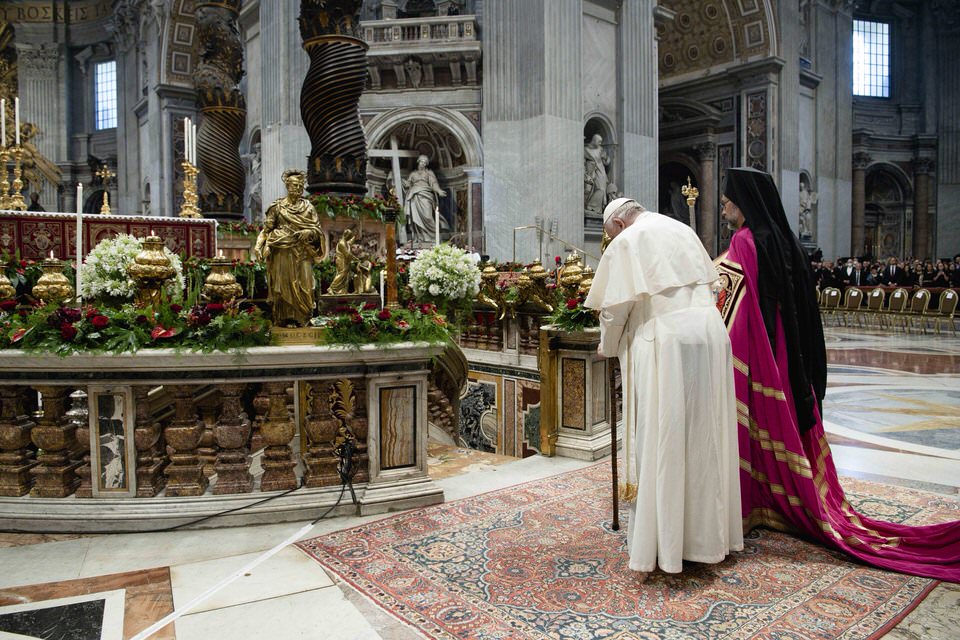 Pope Francis and Orthodox Archbishop Job of Telmessos, head of a delegation from the Ecumenical Patriarchate of Constantinople, pray in front of the tomb of St. Peter in St. Peter's Basilica at the Vatican on the feast of Sts. Peter and Paul, June 29, 2022. (CNS photo/Vatican Media)
So the second question is: What can we do together, as Church, to make the world in which we live more humane, just and solidary, more open to God and to fraternity among men? Surely we must not retreat into our ecclesial circles and remain pinned to some of our fruitless debates. Let us take care not to fall into clericalism, for clericalism is a perversion. A minister who is clerical, who has a clerical attitude, has taken the wrong road; even worse are clericalized lay people. Let us be on our guard against this perversion which is clericalism. Let us help one another to be leaven in the dough of this world. Together we can and must continue to care for human life, the protection of creation, the dignity of work, the problems of families, the treatment of the elderly and all those who are abandoned, rejected or treated with contempt. In a word, we are called to be a Church that promotes the culture of care, tenderness and compassion towards the vulnerable. A Church that fights all forms of corruption and decay, including those of our cities and the places we frequent, so that in the life of every people the joy of the Gospel may shine forth. This is our “fight”, and this is our challenge. The temptation to stand still is great; the temptation of that nostalgia which makes us look to look at other times as better. May we not fall into the temptation of “looking back”, which is becoming fashionable today in the Church. Brothers and sisters today, according to a fine tradition, I have blessed the Pallia for the recently named Metropolitan Archbishops, many of whom are present at our celebration. In communion with Peter, they are called to “get up quickly”, not to sleep, and to serve as vigilant sentinels over the flock. To get up and “fight the good fight”, never alone, but together with all the holy and faithful people of God. And as good shepherds, to stand before the people, among the people, and behind the people, but always with the God’s holy and faithful people, since they themselves are also part of the holy and faithful People of God. I cordially greet the Delegation of the Ecumenical Patriarchate sent by my dear brother Bartholomew. Thank you for your presence and for the message you have brought from Bartholomew! Thank you for walking together because only together can we be the seed of the Gospel and witnesses of fraternity. May Peter and Paul intercede for us, for the city of Rome, for the Church and for our entire world. Amen. Text courtesy of Libreria Editrice Vaticana 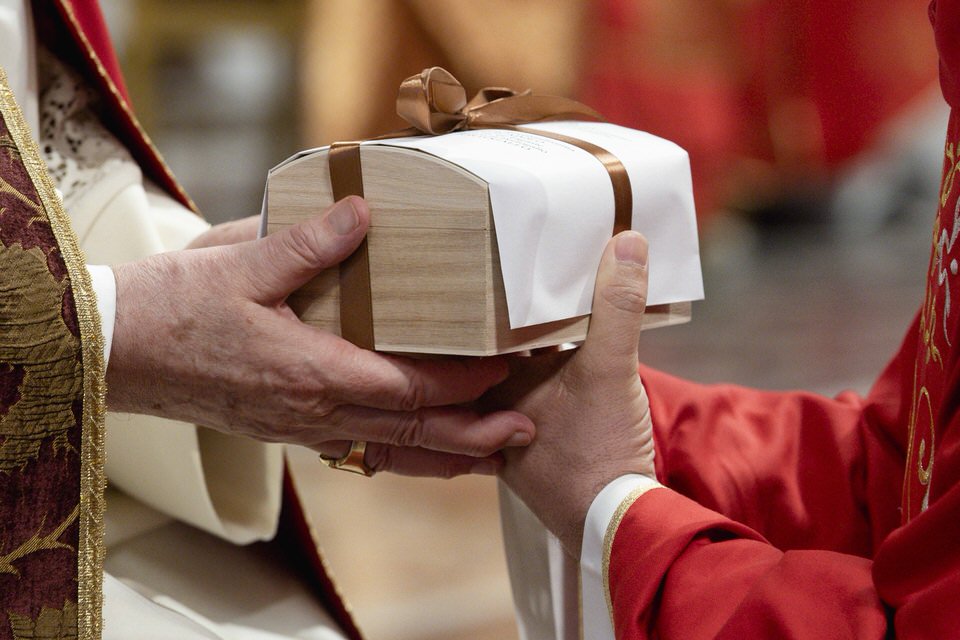 Pope Francis hands an archbishop a box containing a pallium, a woolen stole worn around the shoulders, at the end of a Mass in St. Peter's Basilica at the Vatican June 29, 2022, for the feast of Sts. Peter and Paul. (CNS photo/Vatican Media)