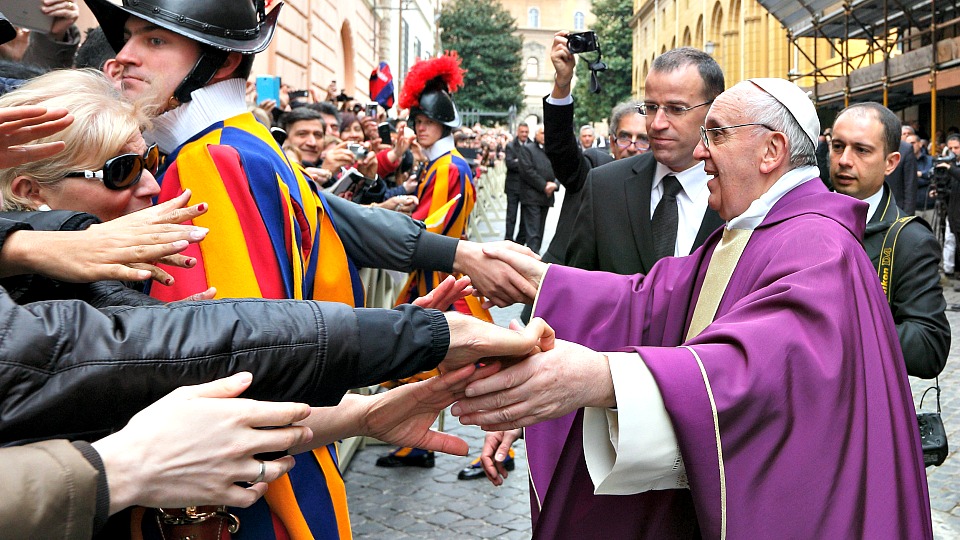 Pope Francis greets people after celebrating Mass at St. Anne's Parish within the Vatican in 2013. March 13 marked the fourth anniversary of the Argentine cardinal's election as pope. (CNS photo/Paul Haring)
Last Monday, Pope Francis celebrated four years since his election as pontiff. During this week, the Holy Father received many messages and witnesses for this anniversary, words of profound admiration and encouragement to continue on this path, his ministry. Speaking to Vatican Radio, Cardinal Secretary of State Pietro Parolin said: "I believe that Amoris Laetitia has given a big boost, as I hear from so many people. It is really producing fruits of renewal, accompanying families when they are living problematic situation". Parolin also touched upon two concepts very close to Pope Francis - collegiality and the idea of a Church which “goes out.”He pointed out that the Pope always insists on those reforms which are discerned with the heart. Even the CEI, the Italian Episcopal Conference, sent a letter to the pope thanking him for four things in particular. First, for having placed mercy at the center of his pontificate. Second, for his example of simplicity and for his proximity, through which he keeps sending the message of the Gospel to the world. They also thanked the Holy Father for his tireless exhortation to avoid being dragged into a culture of indifference and despair, and instead to live a life animated by faith and hope. Finally the Italian bishops had a special thanks for the Holy Father's constant prayers. On these last four years of his pontificate, Father Antonio Spadaro, director of the Italian magazine “La Civilta Cattolica” spoke about his memories with the Pope. He recalled the trip to Lesbos as a real unique moment of teaching on the value of ecumenism and on how to treat the issue of refugees. He also mentioned the Pope’s trip to the US in September 2015. According to Father Spadaro, this trip showed the role and the political importance of the Pope who is “the greatest moral leader in the world.” Even Monsignor Dario Edoardo Viganò, Prefect of the Secretariat for Communications, recalled these four years of the Pope’s pontificate, which he said “is based on the experience of God.” The Pope constantly “reminds us to not fall into the temptation of worldliness” he affirmed. Pope Francis has not a sociological vision of the faith," said Viganò,"who wanted to underline the importance of the Eucharist for Pope Francis. The Eucharist is the Church's entry into the joy of the Lord, because the Eucharistic celebration is really the way to paradise.

For more on how Pope Francis celebrated his four years as pontiff, watch Vatican Connections, every Friday at 8 pm EST!