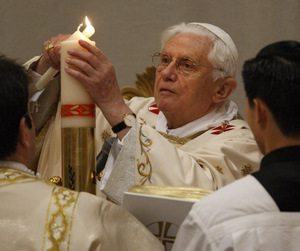 In an Easter Vigil liturgy that included six readings, Pope Benedict chose to focus on the first one. In explaining the selection of the reading from the first chapter of Genesis, the Pope asks, "Is it really important to speak also of creation during the Easter Vigil? Could we not begin with the events in which God calls man, forms a people for himself and creates his history with men upon the earth?"
The Holy Father's answer is no. He reasons that if we ignore God's role as creator, as recited at the beginning of the Credo, then "the whole history of salvation becomes too limited and too small." He further draws a link to the Church's concern for the created order. "The Church is not some kind of association that concerns itself with man’s religious needs but is limited to that objective," he says. "Therefore we relate to God as Creator, and so we have a responsibility for creation." The Pope also connects Genesis with St. John’s testimony that "In the beginning was the Word"—Logos, also meaning reason. This understanding of creation, he says, underpins our whole worldview. “Here we are faced with the ultimate alternative that is at stake in the dispute between faith and unbelief,” the Pope asserts. “Are irrationality, lack of freedom and pure chance the origin of everything, or are reason, freedom and love at the origin of being?  Does the primacy belong to unreason or to reason?  This is what everything hinges upon in the final analysis.” Published below is the full text of Pope Benedict's homily, preached today in St. Peter's Basilica.