Notes from the Holy Land: In the Path of Abraham 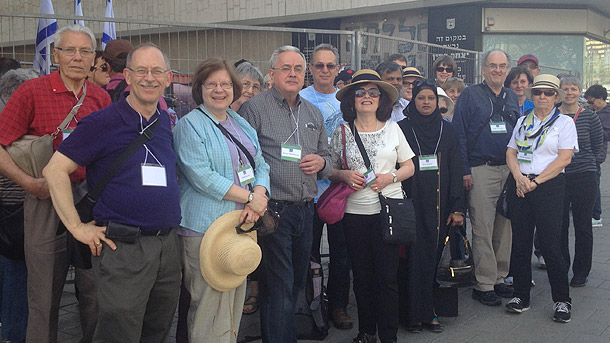 The Reverend Dr. Karen Hamilton is the General Secretary of the Canadian Council of Churches. She will be sending photos and "notes" from the Holy Land where she is co-leading an interfaith study tour called In the Path of Abraham.
by The Rev. Dr. Karen Hamilton
The Path of Abraham has begun! The flights have landed and as a group of 33 Christians, Jews and Muslims we have begun our study tour, our listening, our exploration of the deep, deep complexities of this small, sacred, historical, modern land that is Israel and the Palestinian Territories.
I am the Protestant tour leader, Father Damian MacPherson, Ecumenical and Interfaith Officer for the Toronto Archdiocese is the Roman Catholic tour leader and our other colleagues in leadership are Rabbi Baruch Frydman-Kohl and Imam Abdul Hai Patel.
Our study tour path began in Tel Aviv in the square where Rabin, as Prime Minister of Israel was assassinated by an Israeli for trying to work towards peace.
We then drove beside the beautiful Tel Aviv beaches to Jaffa, the ancient port city that the reluctant prophet Jonah tried to escape God's mission for him from. We heard the perspectives of an Israeli Jew and an Israeli Palestinian from Jaffa and their stories were hard to hear, passionate and conflicted with each other. There is dispute. Both Jews and Palestinians believe their ancestors have always been in the land and the land seems too small to share. We listen, listen, listen.
At the very moment both speakers were telling us that the various communities in Israel and the Palestinian Territories live their lives very divided from each other, that the paths of their every-day lives do not intersect, at that very moment, the strolling paths of two Orthodox Jewish young men and a Muslim young woman in a hijab crossed over and intersected each other.
Pray for the Peace of Jerusalem indeed and listen, listen, listen.
-----
Photo: Courtesy Rev. Dr. Karen Hamilton/ Participants in the "In the Path of Abraham" Study Tour