Love... it changes everything!

When we were younger, my sister and I used to love listening to the song Love Changes Everything. It’s from the soundtrack of the Andrew Lloyd Webber musical Aspects of Love. 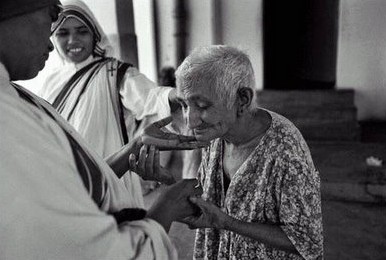 The song was going through my mind for the first time after all these years. I was thinking of two married couples I have known for years moving on with their lives and settling roots elsewhere. It’s funny how love has enabled them to go places and accomplish things they may never have considered before…. I have a 21-year-old brother who, just a few months ago, was living quite comfortably under my parents’ roof. I had invited a friend over for dinner with my family, and all my siblings were fascinated by the story of her two weeks in Calcutta. She was there as a volunteer helping Mother Teresa’s Missionaries of Charity. She talked about how she was just there for people who were abandoned, sick, or old. She talked about the worst living conditions she had ever experienced. And yet she said that those two weeks were two of the most fulfilling weeks of her life. Soon after this, my baby brother, the youngest in the family, stated his intention to go to India. But he’d go for two months. It wasn’t love that made him want to go beyond his comfort zone. Not at first, anyway. It was a desire for adventure, to travel somewhere exotic, and yet do something worthwhile. He didn’t have to go through any application process. All he was told to do was show up at the Sisters’ place and he’d be put to work. Unfortunately, my brother found out two days before his flight to Calcutta that he needed a visa to go. There was no way he could get this visa in two days. But they asked him to come the next morning and try again – they might be able to do something for him, although it was unlikely they could. He was being pushed around from person to person that he felt so exhausted and discouraged by the whole process. He went home and closed the door of his room. He was so close to going to India, so why was this happening now? In the past few weeks, he had learned to love prayer, he had grown in his love for God, and he had deepened in his faith. He was so grateful for the time he had in preparation for his trip. His life was already changing inside and out. In the dark, he prayed to Mother Teresa: “Mother Teresa, I know that God is calling me to go to India. I want to do what you did. Why is this happening now? Please help me find some light in the darkness….” At that moment, he saw a light flickering on his desk. It was his cellphone. He went to pick it up. It was a call from the bookstore: “I just want to let you know that the book you ordered entitled Mother Teresa: A Life of Love is in. You can pick it up at any time.” My brother immediately called me afterwards this to tell this story. How he was praying to Mother Teresa and immediately afterwards this call came in. He said that he was 150% confident that he would get his visa. This was incredible for me because I’ve never seen my brother speak with such a strong faith. My brother is attending Mass now, going to adoration, praying – it was incredible! There is no typical happy ending to this story. The next day, my brother tried again to get a visa but didn’t get it! He was told that it would take at least five to six days. He was crushed. Why did he feel 150% sure the day before that he would get the visa? What could be the purpose of all this? He is realizing now that maybe he should be reading Mother Teresa’s book before he goes to India. That he should be getting himself set-up to go back to school in January. And that he could spend more time in prayer and interior preparation. So, the story of my brother in India is a longer story that can’t be told here. But what a beginning to his story filled with trust, broken expectations, and yet the promise of something better. And because he is learning to love, he is willing to wait, willing to take risks, willing to have his expectations crushed. Doesn’t love change everything?