Light for the World

It was an early start Thursday morning for me. 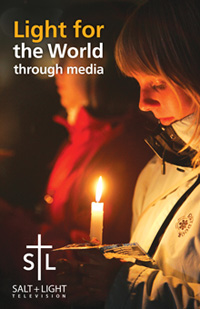 Day three of the Holy Father's visit to Portugal, and perhaps the pinnacle of the trip: Holy Mass at Fatima on the feast of Our Lady of Fatima.  Up shortly after 2am, I was in the office just before 4am.  These Apostolic Voyages in different timezones are always difficult, it seems just when your body has gotten used to going to bed at 7pm and getting up at 2am, the trip has come to a close!  Joined by a technical crew of six -- David, Javier, John, Antoine, Ross, Jeroen -- researcher Alessia, and my co-host Fr. John, the office was alive even before we went on air at 5am! Sometime after 6am cameraman Dave arrived to gather equipment.  He would soon be on a bus with Rita, the latest addition to our French team, traveling to Ottawa to capture footage from the National March for Life.  They wouldn't get home until the wee hours Friday morning. We were live, on-air, for just over three hours straight covering the Pope's beautiful Mass in Fatima.  It was exhausting, but we were energized by the message of the Pope and the powerful images from Fatima.  Leaving the studio, many my colleagues had already arrived.  Pedro was in to tape S+L Radio and wrap up a Catholic Focus too.  Kris was in as well.  Both were going to be taking part in a panel discussion at the Canadian Church Press/Association of Roman Catholic Communicators of Canada convention, being held in Toronto.  They would join our marketing team, who left earlier with plenty of DVDs and newsletters to showcase our network. Kris was juggling his talk at the convention with completing Salt + Light's latest documentary which airs this Sunday, May 16th at 8:30pm ET.  The production follows in the footsteps of Pope Benedict's pilgrimage to the Holy Land, while chronicling a pilgrim's search for the living God amidst the ancient sites of the Holy Land.  Pedro, on the other  hand, is preparing to fly to the Yukon with cameraman Wally to film a project with Catholic Missions. He's not the only one traveling. Jenna and our director of marketing, Danny, will be in Nashville representing Salt + Light at the Springtime of Faith conference this weekend.  Before Jenna traveled to Nashville though, she had to write and host her first weekly Perspectives.  Speaking of, Sebastien and the French department were busy prepping and filming their weekly edition of Perspectives on Thursday too.  Danielle would be kept busy editing those episodes of Perspectives over the next two days, as well as the English weekly edition that Pedro filmed the day before.  Danielle had just returned from London, Ontario, part of a crew that was led by Mary Rose.  Mary Rose wasn't in on Thursday because she was taking a day off  -- she had been filming 10 days straight for a documentary on the beautiful stained glass windows in the chapel of St. Thomas Aquinas at St. Peter's seminary. I left the office around noon on Thursday, having started early for the Pope's coverage.  My work still continued from home though, updating our blog with speeches from the Pope's meeting with pastoral social groups, and the Bishops of Portugal.  I imagine many more things happened while I was gone, as there's usually activity into the evening. I write about this not to show-off how busy we are, but I write it to show you how busy we really are! A lot of people don't realize the amount of time, money, and effort that goes into running a national television station.  It takes a hard working team dedicated to the new evangelization. Sunday marks the 44th World Communications Day.  It's a day that's important to us, as we are communicating the message of the Gospel not just to Toronto, not just to Canada, but to the world.  To do this, to be able to work on the many things I listed above -- from just one morning -- we need your support. We need your spiritual support -- we need prayers for this ministry (and it is a ministry).  We need your words of encouragement, your feedback (even your constructive criticisms and ways to improve!). We need you to spread the word about Salt + Light -- in your parishes, to your friends, online.  Pope Benedict's message for World Communications Day this year focused on priests -- The Priest and Pastoral Ministry in a Digital World: New Media at the Service of the Word.  One way for priests to help make the Church known on the new digital frontier is by supporting and promoting Salt + Light.  It's as simple as putting up a Salt + Light "Light for the World, Through Media" poster. We need your financial support.  It's expensive to operate a television station.  As we celebrate our seventh year, our equipment is aging and is in need of updating, and even replacement in some cases.  It's not a case of having the latest and greatest, but of having what is necessary to bring quality Catholic programs to our audience.  People often have a hard time understanding why certain events aren't covered, or why we can't cover their event.  The reality is, we just don't have the resources.  Many don't realize that we are a charity, and that we rely on the generosity of others... a generosity that we are always grateful for, and humbled by. As we mark World Communications Day, we ask you to support Salt + Light.  In his recent trip to Portugal, the Holy Father affirmed how important it is for us to engage the world, how we are called to be missionaries of Christ for the world!  We ask you to support our mission work in media.  As our latest campaign proclaims, help us offer Light for the World, Through Media!