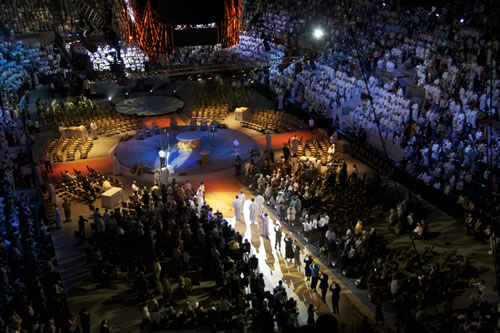 This morning's session began with a Catechesis by Cardinal Phllippe Barbarin, Archbishop of Lyon, France. He said that the Eucharist makes us contemporaries of the Thursday supper, the Friday Passion and the Sunday Resurrection. He also referred to the Hebrew word, "zikkaron", which is the word Jesus would've used when he said, "do this in memory (in 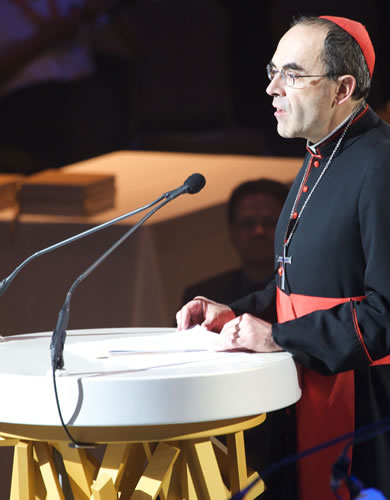 memorial) of me". This is the Jewish concept of "remembering", but not a remembering where we just recall events that happened to someone else a long time ago - as in a war memorial, but in a way that makes those remembering part of the thing they remember. When Jewish people celebrate Passover, it's like they themselves personally are being freed from bondage in Egypt. It's not something that happened to another group of people 5000 years ago - it happens to them right now, today. It's a memorial that's an act of Faith.It's the same when Catholics go to Mass - we are there. The last supper, the passion and resurrection are present to us as if we were there 2000 years ago. And guess what? Do some of us doubt? Sure - don't you think some of the apostles who were there 2000 years ago doubted? Just 'cause you doubt doesn't mean that the "making present" of the moment is not happening. It is happening. That's the mystery. The Catechesis was followed by a testimony by Fr. Nicolas Buttet, founder of the Eucharestein Fraternity. He was a great speaker! He used many personal experiences from his travels and with people in his community to remind us that the same Christ who is present at the altar, is present in those who are suffering, the poor and the lonely. He made me think that we are so lucky here in Canada: we have Mass available everyday. So many around the world don't have that luxury. So many go to jail for bringing the Eucharist to others and for celebrating the Eucharist. And when you go to those places and see the hunger for Christ in the eyes of the Faithful - it is so humbling. We are blessed indeed. Let's not take this "gift of God" for granted. It's the love of God - who reveals to us how He is God and how He is man. 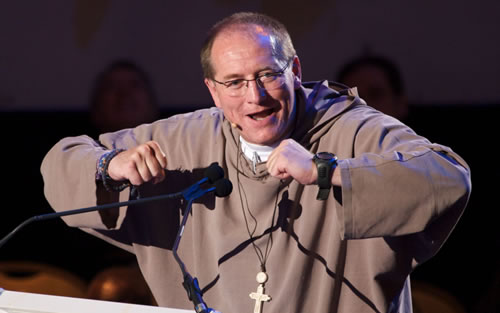 Finally, Mass was celebrated by Cardinal Stanis?aw Dziwisz, Archbishop of Krakow, best known for his 40 years as personal secretary, first to Karol Wojty?a, and then to Pope John Paul II. He is a celebrity, even drawing some applause as he processed in. He gave a moving homily playing on the motto of Quebec, "Je me souviens" and the "I remember" of the Eucharistic celebration. We remember not so much as a recalling, but as a reflection. Je me souviens means "I make memories". Reminded me of when I was in Sweden in an exchange and one of the first activities of the group was to spend a weekend together at a campsite, so that we could "make common memories". There was no English translation for the Swedish word. We were to spend time together so we could "remember" the time spent together the summer before. I wish I could explain it better. When we remember we are present to that which we remember. Memorial and presence.Needless to say that since it was Cardinal Dziwisz, I was remembering WYD2002 and our times we shared with him and JPII. I was remembering JPII. There seemed to be a buzz surrounding Cardinal Dziwisz and people seemed to treat him as if he was John Paul himself. Almost like a first class relic. 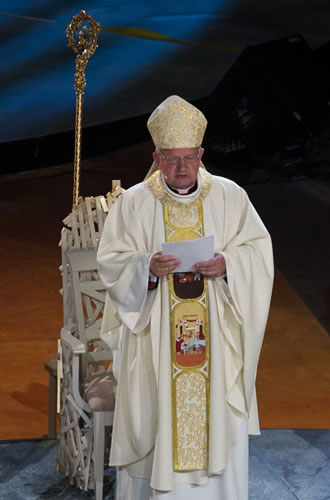 After lunch, we taped an interview with Cardinal Dziwisz with Fr. Tom Rosica, for his TV show Witness and there was a lot of remembering. It was wonderful to be so close to this man - but I still didn't quite feel that being close to him was like being close to JPII.After the interview, we gathered with the Cardinal, a group from the Community of Marie-Jeunesse, a group from Catholic Christian Outreach and the group from S+L. We thanked Cardinal Dziwisz and in turn he gave us some words of inspiration, encouragement and hope. I was told by our Polish colleague, Justyna later when I mentioned to her that we were all moved by his words, that he told her that he had been surprised at the number of young people who had showed up and was moved by us! I must admit that I was moved to tears at the end of the gathering when Marie-Jeunesse led us in singing the WYD2002 theme song, Lumiere du monde. I couldn't sing it, I was too choked up.After the gathering, as I went to retrieve the Cardinal's microphone, he turned to me and touched his hand to my face - he held my face and looked right into my eyes and smiled. For a second, I was staring into John Paul II's eyes, feeling his touch on my face. It was more than a memorial. I was really present, and so was he. I knew, just as I remember my WYD experience with great joy and love, so does he, and so does John Paul II.-Photos courtesy of Emmanuel Pires, Archdiocese of Toronto