Pope: What is truth? Excerpt from Jesus of Nazareth 2 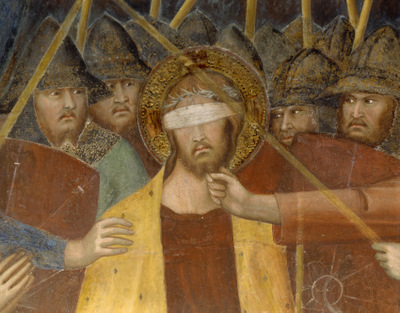 I will never forget that line, "What is truth?", from the movie The Passion. I remember quoting it constantly among friends. We were fascinated by the line delivery by the actor who played Pilate. ...And perhaps we were looking for the truth. I recalled all this recently when reading parts of Pope Benedict XVI's new book, "Jesus of Nazareth – Holy Week: from the entrance into Jerusalem to the Resurrection." Last week, Kris wrote about Jesus' accusers, and posted an excerpt from the book. If you continue reading that chapter, there is a section on Pilate's trial for Jesus. As the Holy Father points out, the question that I was so fond of repeating is one that we should still ask today:

What is truth? Pilate was not alone in dismissing this question as unanswerable and irrelevant for his purposes. Today too, in political argument and in discussion of the foundations of law, it is generally experienced as disturbing. Yet if man lives without truth, life passes him by; ultimately he surrenders the field to whoever is the stronger. “Redemption” in the fullest sense can only consist in the truth becoming recognizable. And it becomes recognizable when God becomes recognizable. He becomes recognizable in Jesus Christ. In Christ, God entered the world and set up the criterion of truth in the midst of history. Truth is outwardly powerless in the world, just as Christ is powerless by the world’s standards: he has no legions; he is crucified. Yet in his very powerlessness, he is powerful: only thus, again and again, does truth become power. In the dialogue between Jesus and Pilate, the subject matter is Jesus’ kingship and, hence, the kingship, the “kingdom”, of God. In the course of this same conversation it becomes abundantly clear that there is no discontinuity between Jesus’ Galilean teaching—the proclamation of the kingdom of God—and his Jerusalem teaching. The center of the message, all the way to the Cross—all the way to the inscription above the Cross—is the kingdom of God, the new kingship represented by Jesus. And this kingship is centered on truth. The kingship proclaimed by Jesus, at first in parables and then at the end quite openly before the earthly judge, is none other than the kingship of truth. The inauguration of this kingship is man’s true liberation. ... Indeed the great “Truth” of which Jesus had spoken was inaccessible to Pilate. Yet the concrete truth of this particular case he knew very well. He knew that this Jesus was not a political criminal and that the kingship he claimed did not represent any political danger—that he ought therefore to be acquitted. As Prefect, Pilate represented Roman law, on which the Pax Romana rested—the peace of the empire that spanned the world. This peace was secured, on the one hand, through Rome’s military might. But military force alone does not generate peace. Peace depends on justice. Rome’s real strength lay in its legal system, the juridical order on which men could rely. Pilate—let us repeat— knew the truth of this case, and hence he knew what justice demanded of him. Yet ultimately it was the pragmatic concept of law that won the day with him: more important than the truth of this case, he probably reasoned, is the peace-building role of law, and in this way he doubtless justified his action to himself. Releasing this innocent man could not only cause him personal damage—and such fear was certainly a decisive factor behind his action—it could also give rise to further disturbances and unrest, which had to be avoided at all costs, especially at the time of the Passover. In this case peace counted for more than justice in Pilate’s eyes. Not only the great, inaccessible Truth but also the concrete truth of Jesus’ case had to recede into the background: in this way he believed he was fulfilling the real purpose of the law—its peace-building function. Perhaps this was how he eased his conscience. For the time being, all seemed to be going well. Jerusalem remained calm. At a later date, though, it would become clear that peace, in the final analysis, cannot be established at the expense of truth.

The chapter speaks quite a bit more of the encounter between Pilate and Jesus, including thoughts on the scourging, the crowning of thorns, and Barabbas' amnesty.  The Pope also links together the Ecce Homo scene and suffering:

“Ecce homo”—the expression spontaneously takes on a depth of meaning that reaches far beyond this moment in history. In Jesus, it is man himself that is manifested. In him is displayed the suffering of all who are subjected to violence, all the downtrodden. His suffering mirrors the inhumanity of worldly power, which so ruthlessly crushes the powerless. In him is reflected what we call “sin”: this is what happens when man turns his back upon God and takes control over the world into his own hands. There is another side to all this, though: Jesus’ innermost dignity cannot be taken from him. The hidden God remains present within him. Even the man subjected to violence and vilification remains the image of God. Ever since Jesus submitted to violence, it has been the wounded, the victims of violence, who have been the image of the God who chose to suffer for us. So Jesus in the throes of his Passion is an image of hope: God is on the side of those who suffer.

The second part of Jesus of Nazareth will be released this Thursday, March 10th. - Image: Christ crowned with thorns is depicted in a fresco detail from the Collegiata in San Gimignano, Italy. CNS photo/A.M. Rosati, courtesy Art Resource.