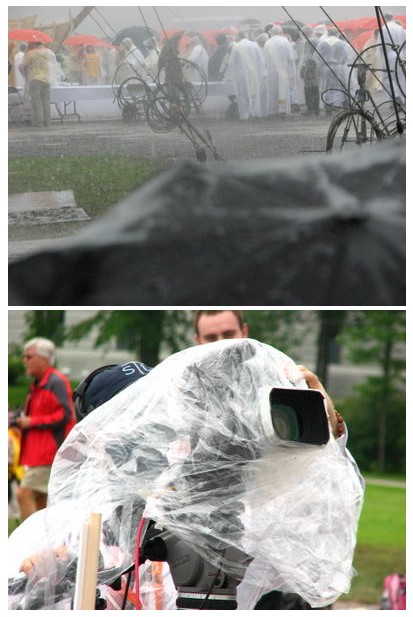 I remember sauntering into the dining room of our hotel for breakfast, and I must have been looking dazed and tired because a Sister came up to me and said, “You don’t look as perky as you do most mornings this week. I just wanted to let you know, as a fan!” That was sweet of her.
The Sunday Mass, Statio Orbis, is supposed to be the spiritual summit and center of the week-long Eucharistic Congress. This year, Pope Benedict was going to give his homily live, so people were really excited. I was excited, but it’s been a long week.You’ve probably already read in the papers about how this Sunday Mass went. Some papers say that over 50,000 people were there, which is wonderful! Everybody listened as the Pope spoke about the need to develop the Eucharistic life. But it rained so hard – it started to pour down during the Our Father and it didn’t let off till some time after Communion.Unfortunately for me, I was wearing white pants. It was drizzling all week and I was wearing my black pants a lot because of that. For Sunday, I thought I’d dress it up. The forecast was rain, but I didn’t expect a flood! The mud turned my pants brown from the knees down. There was such pandemonium during the rain that I thought we would have to cancel the broadcast.Amazingly enough, there was a really positive spirit in the air. Cardinal Tomko ended the Mass by congratulating the crowd for being courageous in the rain. He called the rain a sign of the “abundance of God’s grace.”

After the Mass, a couple from Chicoutimi -- Carl and Suzanne -- approached some of us who were waiting for Matthew to finish shooting his on-camera stand-ups for Zoom. I find out that Carl is a HUGE fan of Salt + Light, and that he’s been watching us grow for the 5 years that we’ve been around. He knew who I was and embraced me.His wife told me, “I’m thankful for the rain. I saw Cardinal Ouellet going up the stairs to the altar when the downpour started, and I thought of the mud getting on his alb. I said to myself, ‘Oh no, I’ve got to help him.’ So I ran over to him and lifted his alb all the way up to the altar. I told my husband, ‘You know, that was a once-in-a-lifetime opportunity! If it weren’t for the rain, I wouldn’t be able to get close to the Cardinal like that.’”What a great spirit! Hurrah for the abundance of God’s grace!