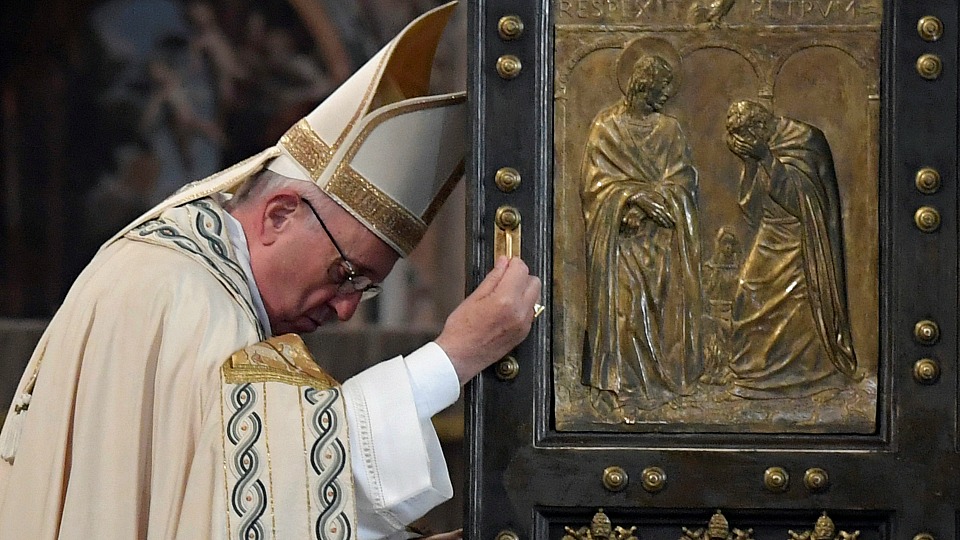 CNS photo/Tiziana Fabi, pool via Reuters
At 10:00 this morning, the Solemnity of Christ the King, in St. Peter's Square, Pope Francis celebrated the closing Mass of the Holy Year of Mercy, with the new Cardinals, with the College of Cardinals, Archbishops, Bishops and Priests. At the beginning of Mass, the Holy Father led the Rite of closing of the Holy Door of the Vatican Basilica. During the mass, he pronounced the following homily:

The Solemnity of Our Lord Jesus Christ, King of the Universe, is the crown of the liturgical year and this Holy Year of Mercy. The Gospel in fact presents the kingship of Jesus as the culmination of his saving work, and it does so in a surprising way. “The Christ of God, the Chosen One, the King” (Lk 23:35,37) appears without power or glory: he is on the cross, where he seems more to be conquered than conqueror. His kingship is paradoxical: his throne is the cross; his crown is made of thorns; he has no sceptre, but a reed is put into his hand; he does not have luxurious clothing, but is stripped of his tunic; he wears no shiny rings on his fingers, but his hands are pierced with nails; he has no treasure, but is sold for thirty pieces of silver. Jesus’ reign is truly not of this world (cf. Jn 18:36); but for this reason, Saint Paul tells us in the Second Reading, we find redemption and forgiveness (cf. Col 1:13-14). For the grandeur of his kingdom is not power as defined by this world, but the love of God, a love capable of encountering and healing all things. Christ lowered himself to us out of this love, he lived our human misery, he suffered the lowest point of our human condition: injustice, betrayal, abandonment; he experienced death, the tomb, hell. And so our King went to the ends of the universe in order to embrace and save every living being. He did not condemn us, nor did he conquer us, and he never disregarded our freedom, but he paved the way with a humble love that forgives all things, hopes all things, sustains all things (cf. 1 Cor 13:7). This love alone overcame and continues to overcome our worst enemies: sin, death, fear. Dear brothers and sisters, today we proclaim this singular victory, by which Jesus became the King of every age, the Lord of history: with the sole power of love, which is the nature of God, his very life, and which has no end (cf. 1 Cor 13:8). We joyfully share the splendour of having Jesus as our King: his rule of love transforms sin into grace, death into resurrection, fear into trust.?It would mean very little, however, if we believed Jesus was King of the universe, but did not make him Lord of our lives: all this is empty if we do not personally accept Jesus and if we do not also accept his way of being King. The people presented to us in today’s Gospel, however, help us. In addition to Jesus, three figures appear: the people who are looking on, those near the cross, and the criminal crucified next to Jesus. First, the people: the Gospel says that “the people stood by, watching” (Lk 23:35): no one says a word, no one draws any closer. The people keep their distance, just to see what is happening. They are the same people who were pressing in on Jesus when they needed something, and who now keep their distance. Given the circumstances of our lives and our unfulfilled expectations, we too can be tempted to keep our distance from Jesus’ kingship, to not accept completely the scandal of his humble love, which unsettles and disturbs us. We prefer to remain at the window, to stand apart, rather than draw near and be with him. A people who are holy, however, who have Jesus as their King, are called to follow his way of tangible love; they are called to ask themselves, each one each day: “What does love ask of me, where is it urging me to go? What answer am I giving Jesus with my life?” 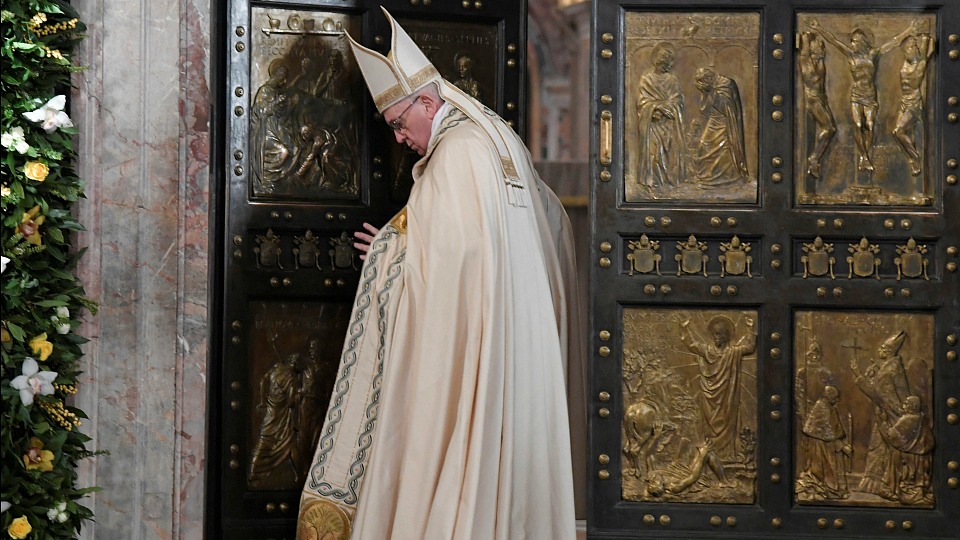 There is a second group, which includes various individuals: the leaders of the people, the soldiers and a criminal. They all mock Jesus. They provoke him in the same way: “Save yourself!” (Lk 23:35,37,39). This temptation is worse than that of the people. They tempt Jesus, just as the devil did at the beginning of the Gospel (cf. Lk 4:1-13), to give up reigning as God wills, and instead to reign according to the world’s ways: to come down from the cross and destroy his enemies! If he is God, let him show his power and superiority! This temptation is a direct attack on love: “save yourself” (vv. 37,39); not others, but yourself. Claim triumph for yourself with your power, with your glory, with your victory. It is the most terrible temptation, the first and the last of the Gospel. When confronted with this attack on his very way of being, Jesus does not speak, he does not react. He does not defend himself, he does not try to convince them, he does not mount a defence of his kingship. He continues rather to love; he forgives, he lives this moment of trial according to the Father’s will, certain that love will bear fruit. In order to receive the kingship of Jesus, we are called to struggle against this temptation, called to fix our gaze on the Crucified One, to become ever more faithful to him. How many times, even among ourselves, do we seek out the comforts and certainties offered by the world. How many times are we tempted to come down from the Cross. The lure of power and success seem an easy, quick way to spread the Gospel; we soon forget how the Kingdom of God works. This Year of Mercy invites us to rediscover the core, to return to what is essential. This time of mercy calls us to look to the true face of our King, the one that shines out at Easter, and to rediscover the youthful, beautiful face of the Church, the face that is radiant when it is welcoming, free, faithful, poor in means but rich in love, on mission. Mercy, which takes us to the heart of the Gospel, urges us to give up habits and practices which may be obstacles to serving the Kingdom of God; mercy urges us to orient ourselves only in the perennial and humble kingship of Jesus, not in submission to the precarious regalities and changing powers of every age. In the Gospel another person appears, closer to Jesus, the thief who begs him: “Jesus, remember me when you come into your kingdom” (v. 42). This person, simply looking at Jesus, believed in his kingdom. He was not closed in on himself, but rather – with his errors, his sins and his troubles – he turned to Jesus. He asked to be remembered, and he experienced God’s mercy: “Today you will be with me in paradise” (v. 43). As soon as we give God the chance, he remembers us. He is ready to completely and forever cancel our sin, because his memory – unlike our own – does not record evil that has been done or keep score of injustices experienced. God has no memory of sin, but only of us, of each of us, we who are his beloved children. And he believes that it is always possible to start anew, to raise ourselves up. Let us also ask for the gift of this open and living memory. Let us ask for the grace of never closing the doors of reconciliation and pardon, but rather of knowing how to go beyond evil and differences, opening every possible pathway of hope. As God believes in us, infinitely beyond any merits we have, so too we are called to instil hope and provide opportunities to others. Because even if the Holy Door closes, the true door of mercy which is the heart of Christ always remains open wide for us. From the lacerated side of the Risen One until the very end of time flow mercy, consolation and hope. So many pilgrims have crossed the threshold of the Holy Doors, and far away from the clamour of the daily news they have tasted the great goodness of the Lord. We give thanks for this, as we recall how we have received mercy in order to be merciful, in order that we too may become instruments of mercy. Let us go forward on this road together. May our Blessed Lady accompany us, she who was also close to the Cross, she who gave birth to us there as the tender Mother of the Church, who desires to gather all under her mantle. Beneath the Cross, she saw the good thief receive pardon, and she took Jesus’ disciple as her son. She is Mother of Mercy, to whom we entrust ourselves: every situation we are in, every prayer we make, when lifted up to his merciful eyes, will find an answer.