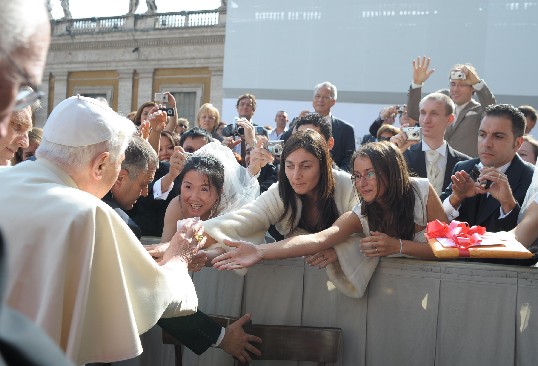 If you get the opportunity to receive the Pope's blessing for newlyweds in Rome after his General Audience, what do you do? Sleep in for an hour later than you planned, end up on the third row of five, and not push your way to the front of the group of newlyweds reaching out for the Pope? Maybe not, but that's what this newlywed couple did! Don't get me wrong, my husband of three weeks and I would sacrifice sleep to meet the Pope, but we are on our honeymoon! AND we feel really blessed to just be here to receive the Pope's blessing. Of course, we would love to personally meet the Pope. But until the day comes that we're personally introduced to him (we hope), well, we will be focused on what we came here for – to spend time together to grow. In the meantime, since my husband would never push anybody to get to the top, and I am not the type to treat people like rock stars, there is no meeting the Pope at a General Audience of any sort. As a result, let's play Where's Waldo. But instead of Waldo, it's yours truly, the newlyweds. Can you believe we spent 32 euros for this photo (above) and a couple more like it? This was even the best one of the batch, no joke! 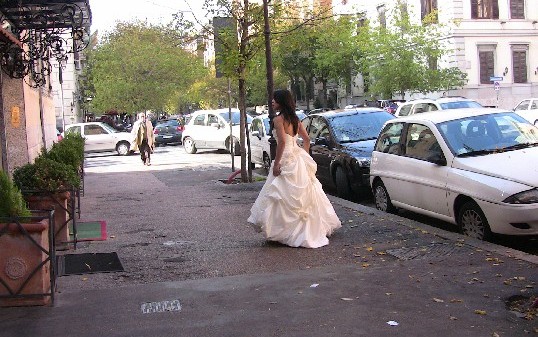 It has indeed been a wonderful honeymoon so far in La Bella Roma. My husband was intent on showing off his repertoire of Roman knowledge as he took me on the grand tour. And I was happy for this, but happier even more when he agreed to go off on little adventures outside of the “planned itinerary”. Here's a few of them: watching a Japanese cartoon dubbed in Italian with 7-year-olds in a little cinema for kids, and watching googly-eyed as the film broke off into an intermission so that the little kids could use the tiny toilets and get a refill of popcorn. Hopping onto a random bus as Richard broke off into a sweat, fearing that thieves would steal his pants. And then ending up in the “home renovation/kitchen district” of Rome – we spent an hour going in and out of furniture stores. (I even got to chat with a Filipino worker cleaning one of them.) Going through a secret passage under a church (not open to the general public) to stand before the spot where a saint was burnt to death. And of course, walking five blocks through the streets of Rome from our hotel to St. Peter's Square in our wedding outfits! It seemed equally ridiculous to either take a taxi for five blocks or to walk five blocks in our wedding attire. But walking was the expense-free option, so we opted for this. It was great to have people clapping for us as we crossed the crosswalk or to have people shouting “Auguri!” I think they thought we got married that day – but who gets married on a Wednesday morning?! Anyway, it's been a wonderful, holy honeymoon so far, and it's not over yet. We can't end this blog, however, without sharing with you the fact that we did end up getting a picture with the Pope! 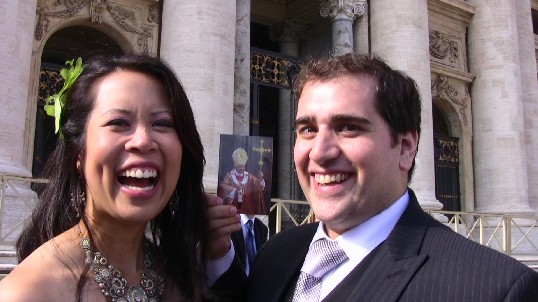