Freedom and authority: not just a church matter pt. 1 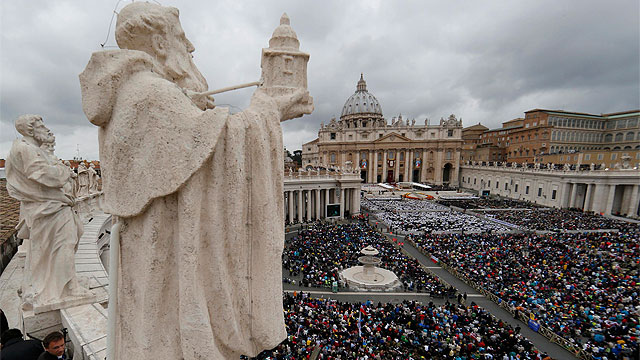 A perennial and penetrating question exists within the Catholic Church that goes to the very heart of its institutional being, namely the freedom of individual conscience vis-à-vis authority in the Church. In terms of expressing one’s conscience, the question might be put this way: what are the limits to public opinion within the Church considering that she insists on adherence to central teachings and at the same time upholds and promotes the freedom of each person’s conscience? (CCC, 1782)
This question arose in a dramatic way five-hundred years ago around the criticisms of the Augustinian monk Martin Luther. Naturally, church authorities responded defensively. They couldn’t have predicted what was to come: a veritable tsunami of religious and social reform in the name of freedom that was hitherto unimaginable in the medieval world. The religious, social, cultural and political effects of the Protestant Reformation have been felt up to this day.
The Catholic Church came to terms with the reality of this question—at least officially—at the Second Vatican Council in the 1960’s. In the revolutionary constitution on the Church in the Modern World we find statements that express this development clearly, for example:

“Let it be recognized that all the faithful, whether clerics or laity, possess a lawful freedom of inquiry, freedom of thought and of expressing their mind with humility and courage in those matters on which they enjoy competence.” (62)

Yet, in the five decades since the Council the question of public opinion in the Catholic Church has not gone away. St. John Paul II was pope for half of that period of time, and opinions among the faithful vary as to the degree to which he implemented and embodied this particular teaching of the Council.
One very clear articulation of his belief in it came in a 1995 encyclical called Ut unum sint (On the Commitment to Ecumenism)—a document that gets far too little publicity in the Catholic world but is indispensable for understanding contemporary ecumenism, and more immediately, the bureaucratic reforms of Pope Francis and the manner in which he exercises the Petrine ministry.
John Paul was conscious of the long and painful history of separation between Christians dating back to the Protestant Reformation and beyond. As a Council Father, he was also conscious of the deep and sincere desire for Christian unity expressed by Pope John XXIII and the vast majority of his brother bishops. Reflecting on the difficult work for unity in ut unum sint, he wrote:

“I am convinced that I have a particular responsibility in this regard, above all in acknowledging the ecumenical aspirations of the majority of the Christian Communities and in heeding the request made of me to find a way of exercising the primacy which, while in no way renouncing what is essential to its mission, is nonetheless open to a new situation.” (95)

To “find a way of exercising the primacy which is… open to a new situation” implies taking an honest and critical look at how it has been exercised up to this point, which in turn raises the question of freedom of expression of those within the Church who wish to offer their critique. The gravity of the question is even more pronounced when we realize that the “primacy” John Paul referred to is not some peripheral teaching, but a fundamental Catholic doctrine.
In his analysis of ut unum sint, Archbishop John Quinn dove into this question of criticism in the Catholic Church, pointing out the long history of disagreement between popes, bishops and the faithful and its implications for today:

“To attempt to create the illusion of unanimity or even consensus where it does not exist and cannot exist is to run the risk of diminishing the moral authority and credibility of the Church. To portray all criticism and disagreement as disloyalty or lack of faith is a grave injustice.” (The Reform of the Papacy)

In light of all this, one can appreciate the import of raising the question of freedom of expression vis-à-vis authority in the Church regarding ecumenism. But as I said above, this is a perennial and penetrating question and therefore transcends any one topic.
It’s fascinating, for example, to look through this lens at the current debate going on in the Church about marriage and family life. I say “debate” quite intentionally because that is exactly what it is. I don’t wish to get into the nuances of each argument. More broadly though, what is truly fascinating is not that the debate is taking place, but that it was sought and initiated by the pope—Pope Francis. He said explicitly at the close of last October’s synod on the family that, “I would be very worried and saddened… if all were in a state of agreement, or silent in a false and quietist peace.” (Read the address here)
A strong argument could be made that the approach of Pope Francis to the question of marriage and family life today is similar to the approach of Pope John Paul to the question of exercising the primacy back in 1995. Both expressed a desire for openness and honesty in a discussion on matters of grave import. The difference with Pope Francis—and this might account for the sense of novelty we feel—is that he communicates so clearly for all to understand.
The result of Francis’ unambiguous call for open discussion and debate on marriage and family life has been exactly that: open discussion and debate. Suddenly those who—for whatever reason—had previously tempered their call for an honest examination of the issue, now feel empowered to speak. Those who are fearful of any change to the current understanding of the Church’s teaching are equally vocal. Nobody knows what is going to happen in the end, but it is evident that the debate is a fruit of the seeds planted at the Council after a long and tumultuous history, nurtured by John Paul in his own way, and now growing rather quickly under Francis. A development, not in theory or doctrine, but in practice is taking place regarding this question of freedom of expression in the Catholic Church. As the saying goes, the toothpaste is out of the tube.
It was necessary to reflect briefly on this question inside the Catholic Church in order to be able to reflect on it outside as well. Freedom of expression vis-à-vis authority within a civil society is an equally weighty matter, and it happens to be front and center right now as the Canadian government moves forward with bill C-51 that would grant extraordinary powers to CSIS and the RCMP in their battle against domestic terrorism. For Canadians, questions of individual liberty and freedom of expression have been thrust on the table. What are we to make of the Conservatives’ approach to this discussion? How can the Church’s experience on the matter inform the debate? As the story develops, I will reflect on those questions next week…