Deacon-structing the Mass | Part 7: The Liturgy of the Eucharist “At the last supper, on the night when He was betrayed, our Saviour instituted the Eucharistic sacrifice of his Body and Blood. He did this in order to perpetuate the sacrifice of the Cross throughout the centuries until He should come again, and so to entrust to his beloved spouse, the Church, a memorial of his death and resurrection: a sacrament of love, a sign of unity, a bond of charity, a paschal banquet in which Christ is eaten, the mind is filled with grace, and a pledge of future glory is given to us.” (SC 47)

This means that our Eucharistic meal is a sacrificial meal. In the celebration of the Eucharist, Christ unites our sacrifice of praise with his sacrifice on the cross. Eucharistic Prayer IV includes these words:

“Look, O Lord, upon the sacrifice which you yourself have provided for your Church, and grant in your loving kindness to all who partake of this one bread and one chalice that, gathered into one body by the Holy Spirit, they may truly become a living sacrifice in Christ to the praise of your glory.”

You can listen specifically for that, or references to that, during the Eucharistic Prayer at Mass, especially on Sundays.

The Preparation of the Gifts

The altar is the centre of this action. As we learned a few weeks ago, it has been consecrated as an icon of Christ and is reserved for the celebration of this sacrificial meal. At no time is our altar to be treated casually. The altar is prepared by the deacon, if there is one (GIRM 178). If not, it can be a lay minister or acolyte. It is ready when the Corporal (small cloth where the gifts are placed for the consecration), Purificators (used to purify or “clean” the Chalices and Patens), the Missal, and Chalice(s) are placed on it. 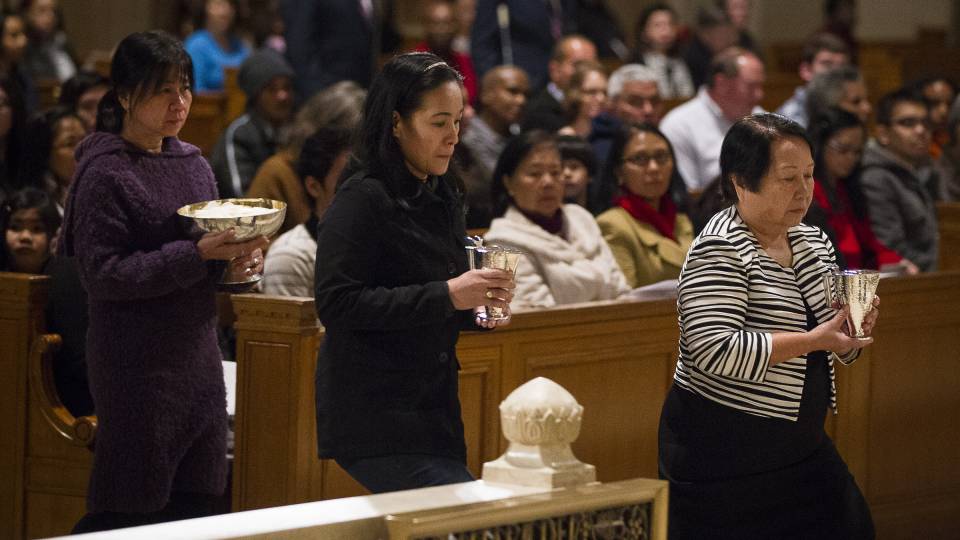 CNS photo/Tyler Orsburn
When the altar is ready, members of the assembly bring the bread and wine near to the altar, along with gifts for the poor or for the needs of the Church. The priest or deacon places the bread and wine on the altar, while the other gifts are brought to another suitable place. It used to be that people would actually bring the gifts from their homes. Even in the early, early Church, the gifts of bread and wine came from people’s homes. We don’t do that anymore, but the fact that members of the congregation bring the gifts is symbolic of this.

Other items of a thematic or decorative nature, which are not intended for the poor or for the needs of the Church community, are not to be presented at this time.

An Offertory song is recommended during the preparation of the altar and gifts, at least until the gifts are placed on the altar. But since the prayers of the priest that follow are to be spoken in a low voice, the singing may continue until the priest has finished washing his hands. The prescriptions for this song are the same as for the Entrance song. Even though this section is commonly called the "Offertory" because the offerings are collected and brought to the altar, that is not the proper name. It is rightly called the "preparation of the gifts". After the gifts have been brought to the altar, the deacon hands the bread to the priest, who offers the blessing (“blessed are you, Lord God…"). If there is a deacon, he then pours the wine into the chalice and adds a few drops of water while saying, “by the mystery of this water and wine, may we come to share in the divinity of Christ, who humbled himself to share in our humanity.” (If there is no deacon, the priest does all this.) He then hands the chalice to the priest, who offers the blessing. These prayers are usually done quietly because there is a song. However, if there is no song, they can be said aloud with the congregation responding, “Blessed be God forever” after each of the two blessings. The priest then bows humbly and prays, “With humble spirit and contrite heart may we be accepted by you, O Lord, and may our sacrifice in your sight this day be pleasing to you, Lord God.”

At this point, the General Instruction says that the Priest may incense the gifts placed on the altar and then incense the cross and the altar itself, so as to signify the Church’s offering and prayer rising like incense in the sight of God. Next, the Priest is incensed (by the deacon or acolyte), because of his sacred ministry, and then the people, by reason of their baptismal dignity (GIRM 75). 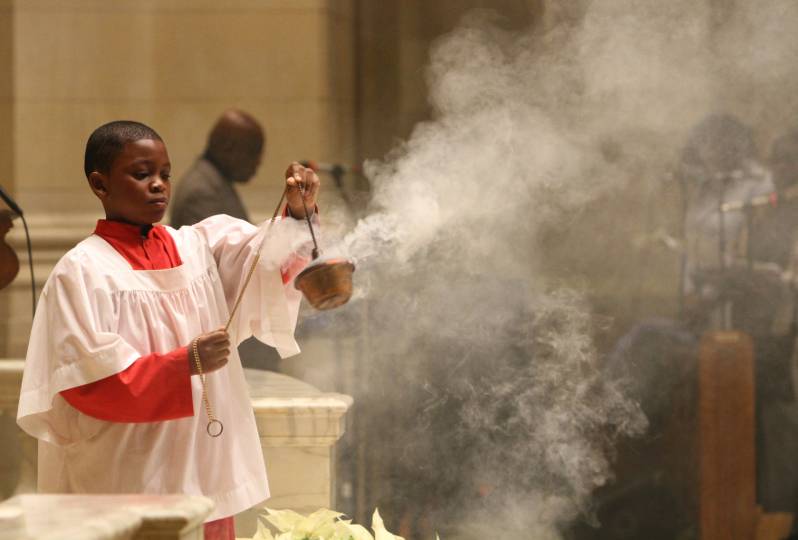 CNS photo/Gregory A. Shemitz
The priest now prepares himself by means of prayers and ritual hand-washing. As the priest "washes" his hands, he quietly says, “Wash me, O Lord, from my iniquity and cleanse me from my sin.” Returning to the altar, the priest, with arms extended, invites everyone to stand by saying, “Pray brothers and sisters, that my sacrifice and yours…” Everyone stands and responds, “May the Lord accept this sacrifice…” The priest then says the Prayer over the Offerings, which is different every week. This is one of the prayers, along with the Collects, that we tend to completely ignore every week. I invite you next time you’re at Mass, to try to pay attention to it. Next time, let’s continue the Liturgy of the Eucharist with the Eucharistic Prayer. You may be interested in actually looking at the Order of the Mass now that some of these things make more sense.

[Most of the information used in these blog posts, comes from the text of a video made by Salt + Light Television in partnership with the National Liturgy Office of the Canadian Conference of Catholic Bishops in 2011, to help explain the latest changes to the language of the English Roman Missal, titled, THE CELEBRATION OF EUCHARIST for the Twenty-First Century. The project was headed by Fr. Bill Burke and the text of that video was written by Canadian liturgist Margaret Bick, both of whom I owe a great deal of thanks for the vast knowledge they shared with us.]