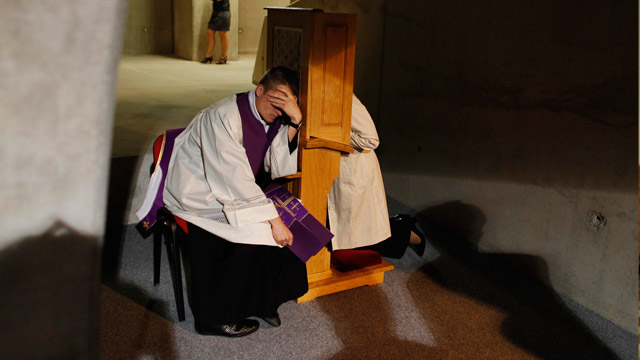 The whole week between the Feast of the Epiphany and the Feast of the Baptism of Our Lord we heard readings from the First Letter of St. John and on the Saturday I heard something that I had never heard before: “If anyone sees his brother sinning, if the sin is not deadly, he should pray to God and he will give him life. This is only for those whose sin is not deadly. There is such a thing as deadly sin, about which I do not say that you should pray. All wrongdoing is sin, but there is sin that is not deadly.” (1 John 5:16-17) For those of us who learned the difference between venial and mortal sins, does this reading ring any bells? Also, in my parish this year we’ve been doing short “catechetical moments” once a month after Mass. This is because it’s not always easy to fit in a good catechesis in a 10-minute homily. We decided to begin by reviewing the Sacraments and in January, we reviewed the Sacrament of Reconciliation. All this made me look back at what I know about Confession and the Sacrament of Reconciliation. As we approach the Season of Lent, what better Sacrament to deacon-struct? Let’s begin with that indelible mark or seal that we receive at Baptism (Read more about this here.) This seal is permanent and we are cleansed from Original Sin. But, if we are sealed permanently and cleansed from Original Sin, why then, do we continue sinning? I think the most basic way to understand sin is as anything that gets in the way between me and God. But I like to think of sin as “falling short”. In fact, one of the Greek words used to mean sin, “hamartia” literally means “to miss the mark,” as in archery: to miss the target. When it comes to sin, this means that I am missing the mark, or falling short of who I am supposed to be. And because of that, I can’t be in full communion with God. I love this analogy that we used in our Catechetical series for youth, In Your Faith: Imagine that you just bought a new robot that will clean your house. Imagine that you spent a lot of money on it and you’re really excited about it. You spend the time putting it together and it’s perfect, except it won’t go backwards. Are you disappointed? Are you a bit upset? Does it “fall short” of your expectations for it? Do you want to send it back to the store? It’s the same thing with sin. Except that with us, God won’t send us back to the store simply because we fall short of his design for us. He wants us to keep trying and keep striving for holiness. But not all sin is the same; thus the passage from the first letter of St. John. The Catholic Church calls some sin “venial sin” (that is not deadly, or doesn’t lead to death, to use St. John’s language) and other sin “mortal sin” (that is deadly). The Catechism of the Catholic Church says that venial sin offends and wounds charity, whereas mortal sin destroys it (CCC#1855). It goes on to say:

“Mortal sin, by attacking the vital principle within us - that is, charity - necessitates a new initiative of God's mercy and a conversion of heart which is normally accomplished within the setting of the Sacrament of Reconciliation.” (CCC#1856)

For a sin to be mortal, three conditions have to be met: Venial sin, on the other hand, occurs when the matter is not grave, and/or when the above is committed without full knowledge or understanding and not deliberately or without complete consent (CCC#1862). The Catechism continues:

“Deliberate and un-repented venial sin disposes us little by little to commit mortal sin. However venial sin does not break the covenant with God. With God's grace it is humanly reparable. "Venial sin does not deprive the sinner of sanctifying grace, friendship with God, charity, and consequently eternal happiness.” (CCC#1863)

I guess that’s why St. John tells his readers that some sin (venial) can be repaired through prayer. But he is clear to state that not all sin can be repaired with just prayer. He means “mortal sin”, sin that is deadly or leads to death. Let’s now get back to where we began: If we are cleansed from sin at baptism, why do we continue sinning? The answer is simple: Because our human nature remains wounded after baptism. Even though Original Sin is removed, the effects of sin are not. This is why we have a tendency to sin. The Church calls this “tendency to sin," concupiscence. Let’s use another analogy: Imagine tasting chocolate for the first time and you like it, so you want more. It’s the same with sin: Because we already tasted sin, we want more. In order to fix these disordered appetites, we need Grace and that’s why we need the Sacrament of Reconciliation. Come back next week so we can see exactly how the Sacrament of Reconciliation works. - CNS photo/Kacper Pempel , Reuters