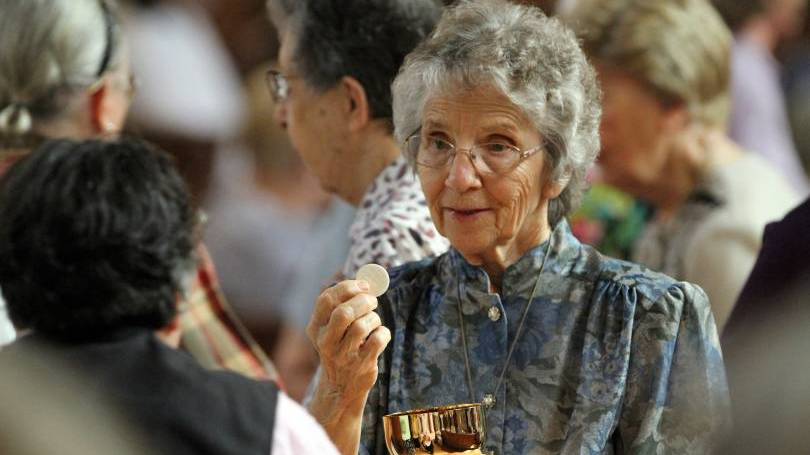 Maryknoll Sister Dora Neutzi serves as an extraordinary minister of holy Communion during Mass at the Maryknoll Sisters Center in Maryknoll, N.Y. (CNS photo/Gregory A. Shemitz)

Gynacolate from the Greek: “gyne” (woman) and “akoloutheo” (to follow). I actually made up the word. It does not exist in English. If you look it up online, you will find nothing. I translated it from the Spanish “ginacolitado,” which was also a word recently invented. Its creation comes from a proposal that came out of the preparation for the 5th Missionary Congress of the Americas. The idea is to create a new lay ministry for women: the “ginacolitado” (N. 271 in the Congress’s Working Document. Everyone admitted that the name has to be changed).

It would be a ministry that is lay, missionary, and feminine in character.

Create a new lay lay ministry: The “ginacolitado” 271. The women of the Gospel occupy a primordial place in the genesis of the new humanity, because they are the first to receive the message of the resurrection. To them the resurrected Jesus appears first of all, and they are the first ones to whom the transmission of the paschal message to the other disciples is entrusted (Mt 28:7). But this pre-eminence in the experience of the encounter with the Risen One we believe is not accidental, for the women remained firm before the crucified one when all the disciples had abandoned Jesus leaving him alone in the decisive hour of death. It’s worth pointing out the pre-eminent place occupied by the Virgin Mary in the Gospel of John at the foot of the cross. Faced with evangelizing needs of the present time in our Church, you could think of a specific ministry of women, in a certain mode, similar to the diaconate, but called otherwise. Its identity as a singularly female ministry would include the character of disciples and followers, who continued with Jesus from Galilee (cf. Lk 23,49), who went up with him to Jerusalem (cf. Mk 15,41), who were there accompanying and as witnesses (cf. Mt 27,55; Mk 15,40) and who contemplated everything that happened (cf. Mt 27,55; Mk 15,40; Lk 23,49). They are also the first evangelizers of the Risen One (cf. Lk 24,23). For all these reasons, they could be called “gynacolytes”: (Sp. Ginacólitas), of the Greek “gyne / gynaikoi” (woman) and “akoloutheo” (follow). In this way, we highlight the feminine character of the ministry and its faithful and imperturbable (not even by death) quality of following.

That is how the background to the idea is presented. It is scriptural and theological. In fact, I read somewhere that not only does the gospel shows the “gynacolate” to us but that the reality of today demands it. The functions of the ministry are then described as:

272. The profile and specific mission of the women, with the rank of ecclesial ministry, referred to as “gynacolate,” could have the following functions and ministerial attributions: Their specific functions would be: a. The proclamation and preaching of the Gospel in the Church and in the world, as deacons; b. The ministry of consolation before the vast world of pain in any of its multiple manifestations (attention to the sick, poor, incarcerated, refugees, marginalized, discarded of all kinds, that is, before “the crucified” of the present time); c. Co-responsibility with the parish priest, within the framework of the parish community, although, as with deacons, it is about co-responsibility, subordinate to that of the parish priest, whose attributions can be stipulated well in the functioning of the Parish Council. d. And they could celebrate the sacraments of Baptism and Marriage, just like the current deacons.

Sounds exactly like the diaconate. And who would be these women? The document continues:

The gynacolyte women: 273. They would be women, religious, or lay, single, or married, who, after studying the same theological curriculum of priests, become theologians, like the priests, formed as such in Christian communities of shared life, with the appropriate demands, and receive from the Bishop the Ministry of the Gynacolate as well as the pastoral appointment for the parish or Christian community that corresponds to them.

That’s all. As far as I know, the idea was presented at the Congress. I am not sure how much it was debated. What I can confirm is that when it was initially mentioned, the 3000 Congress attendees burst into thunderous applause.

Initially, I too thought it was an interesting idea worth considering.

Until I read the actual proposal, which I've presented to you here. It seems to me that there is no distinction in the function of these women and the diaconate. If the aim is to avoid using the term “deacon” and to avoid “ordaining” women, then I think the exercise is pointless. To be clear: It’s a ministry, not ordination or a Sacrament. The function of the women would be exactly the same as deacons (preach the word, work with the Pastor; ministry of consolation and the ability to administer the Sacrament of Baptism and witness to the Sacrament of Marriage), but they would not be called deacons; they would not be clergy.

Seems like a sneaky way to get around the issue of ordaining women to the diaconate.

Besides, there are already thousands of women who are trained as theologians all over the world, who are more qualified than priests to preach the Word (and maybe better preachers). There are also thousands of women all over the world (particularly in Latin America) who are leading prayer services and Liturgies of the Word; who are already preaching and teaching. They are catechists and liturgists. They are also baptising and, no doubt, officiating Marriages – because there are no priests. So why create something new instead of simply legitimizing and encouraging what’s already taking place. Then I spoke to many women who were at the Congress about it. Most had similar concerns. However, because they are women, they had already thought of certain things that would never have occurred to me. One said that it made no sense to create another level of hierarchy specific to women, since the problem in the first place was hierarchy. She added that the ministry (if it were to be created) should be for all lay people and not just women. “Give the laity their rightful place in the Church,” she said adamantly. Others told me that women already do much of what is being proposed. They saw value in recognizing this work as an official ministry. They said that although all the proposals that tend to empower women within the Church are hopeful, they thought that it would be best not to create a specific ministry for them, but to invite them to join established ministries.

I am going to say what I’ve said many times before: The problem is not that women are not allowed to preach or teach, or tend the sick or administer the Sacrament of Baptism. They are. Maybe legitimizing those functions as an official “ministry” could help – not just for women, but for all laity. 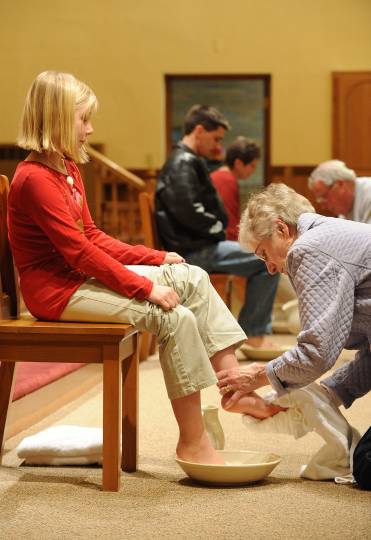 That work is already being done by lay people, many of whom are women. Maybe they can be legitimized by appointing them as ministers. These could all be separate ministries where the ministers are appointed by the Bishop. They don't need to be lumped into one.

Still, this would not solve the problem, the way I see it.

The real problem is that women do not have a role in governing the Church. The Church needs women in real decision-making positions. The Church needs to benefit from that Feminine Genius; women rectors of seminaries, women as diocesan chancellors, heads of marriage tribunals, Directors of World Youth Days, World Meetings of Families and Eucharistic Congresses, and presidents of pontifical councils. Not only are these rarely women, they are rarely laity. It's worth noting that even though this ground-breaking and progressive proposal was presented at the Missionary Congress of the Americas, an event hosted by the Pontifical Mission Societies, none of the National Directors for the Pontifical Mission Societies of the Americas, are women. In fact, as far as I know, they are all priests. During the Congress, none of the key-note speakers were women. We can do better.

Is it time we put our money where our mouth is?

Or in Bible-speak: put our treasure where our heart is.

I would love to hear your comments on this. Write to me pedro@saltandlighttv.org. I would like to publish some of your thoughts and continue this conversation. In particular, I'd like to hear from you if you are a woman who works for the Church. If you want to make your thoughts public, tweet them @deaconpedrogm. You may want to read more on what I’ve written on the female diaconate: Deacon-structing the Diaconate: Part 1, Part 2, Part 3, Part 4 (Women) and Part 5 (Women 2). You may also want to read this interview with Marta Rodriguez, Director of the Office of Women’s Issues in the Vatican Dicastery for Laity, Family and Life. You should also read the wonderful Encyclical Mulieris Dignitatem by St. John Paul II. And, you must watch the excellent Salt + Light TV production A Woman’s Voice: Stories of Discernment and Grace. It will give those of you who think that there is no place for women in the Church a whole new outlook.

- Second image: Ann Clark washes the feet of Isabelle Joski, 9, during a Holy Thursday liturgy in 2009 at St. Mary Church in Algoma, Wis. Following a request by Pope Francis, the Vatican issued a decree Jan. 21 specifying that the Holy Thursday foot-washing ritual can include women. (CNS photo/Sam Lucero, The Compass)