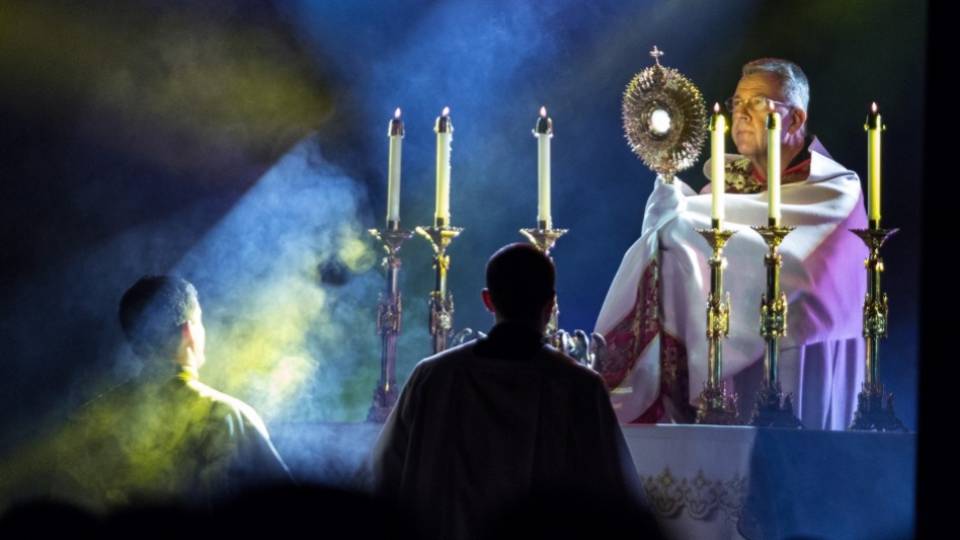 Last time we saw why Jesus used bread and why He referred to himself as the "bread of life." In John chapter 6, in what is known as the "Bread of Life Discourse", Jesus pretty much lays it all out. It was a hard teaching, because at the end of the chapter, John tells us that many of his disciples stopped following him. It is because of John 6, that the Eucharist is also referred to as “bread of life” or even “bread from heaven.” But we also know the Sacrament by other names. The Catechism of the Catholic Church says that the word Eucharist comes from the Greek word that means thanksgiving. The Sacrament is called Eucharist because it is an action of thanksgiving to God. (CCC#1328)

The Sacrament is also called ‘the Lord’s supper’ and ‘the breaking of the bread’ (CCC#1329); ‘the memorial of the Lord’s passion and resurrection’ and ‘the holy sacrifice’ (CCC#1330) because it calls to mind Christ’s ultimate sacrifice of love, and his command to ‘do this in memory of me.’ It is called the holy and divine liturgy, because the Church's whole liturgy finds its centre and most intense expression in the celebration of this Sacrament (CCC#1330). It is also called ‘Holy Communion’ because by this Sacrament we unite ourselves to Christ, who makes us sharers in his body and blood to form a single body (CCC#1331). We unite ourselves in Christ to others present at the celebration and to all Catholics around the world.

And we should all be adoring him in the Blessed Sacrament.

There are those who say that Jesus said, “take and eat,” not “sit and stare,” but Eucharistic adoration is nothing more than a recognition of Christ’s presence in the Blessed Sacrament. In 1965, Pope Paul VI wrote an encyclical about the Eucharist called Mysterium Fidei . In #66, he wrote that the faithful:

“should not forget about paying a visit during the day to the Most Blessed Sacrament in the very special place of honor where it is reserved in churches in keeping with the liturgical laws, since this is a proof of gratitude and a pledge of love and a display of the adoration that is owed to Christ the Lord who is present there.”

Let’s not forget to visit the Blessed Sacrament and to attend Adoration and Benediction. There are also those who say that we are not worthy to receive Jesus in the Eucharist so none of the above makes sense. (Or the reverse, that we are worthy. I’ve even heard about people who refuse to say that prayer at Mass.) It’s true: None of us are really worthy of receiving Jesus. Not really. Not on our own merit. No one is perfect (that’s exactly why we need to receive him), but the more we try and the harder we try, the more God is pleased. And by receiving the Eucharist we also receive the help that we need to keep trying. That’s why we say those words of the centurion whose servant was sick: “Lord, I am not worthy to have you come under my roof, but only say the word, and my servant shall be healed.” (Matthew 8:8) Jesus makes us worthy by his death and resurrection and so we sinners can still receive the body and blood of the Lord. Next week we’ll look at some of the effects of the Eucharist. This is Part 3 of a four-part series. Read Part 1, Part 2, and Part 4.

- Image: Young people pray as a priest holds the monstrance during adoration in 2015 in Nashville, Tenn.  (CNS photo/courtesy FOCUS)