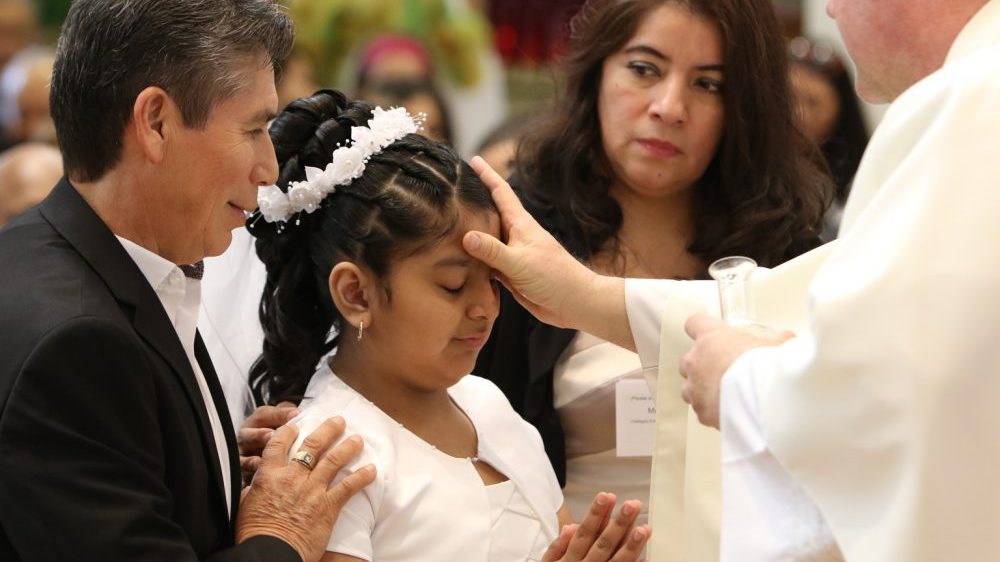 So far we've looked a little bit about why Lent has a baptismal character and we've looked at a particular component of the Catechumenate, the Rite of Election. Before we go on, let me explain a bit more why it's important to keep Baptism at the centre of our Lent. It's not j ust that Lent has a baptismal character, but Baptism is important in our understanding of Lent. The 40-day period that we know today as Lent developed in the fourth century from three different traditions. The first was a two-day fast that was observed before Easter. This practice began in the earliest of days of Christianity and  gradually was extended to 40 days. The second was the catechumenate. As we saw last week, this included an intense preparation for the Sacraments of Initiation that would be celebrated at Easter. The third was the Order of Penitents. This was a practice whereby people who had committed serious sin would confess to the Bishop (or his representative) and would be given a penance. It was roughly modeled on the catechumenate in the sense that while the person was working out their penance, which sometimes involved complicated devotions like pilgrimages, they would be dismissed from Mass after the Liturgy of the Word (like the catechumens). In fact, the used of Ashes on Ash Wednesday came from using ashes on those entering the Order of Penitents. What we observe now as Lent brings these three elements into play: fasting (as we prepare for Easter), preparing for the Sacraments of Initiation and remembering our Baptism, and penance. I think we get the penance part. I think we get the fasting part. Again, let's not forget the baptismal part. This leads me back to the RCIA.  It used to be that people would join the Church as adults (in the early days, children would only become Christians in the case that a whole household would join). The idea was that when an adult wanted to become a Christian, they would be taught first and then when they knew what being a Christian was all about, they would confirm that they still wanted to become a Christian and would then be baptised. When adults today wish to join the Catholic Church, the process is a similar one: we teach first and then they get baptised. (We sometimes forget the importance of teaching since we tend to baptised newborn children. Still Jesus said, "baptise them in the name of the Father, Son and Holy Spirit, teach them to observe everything I have commanded you and remember I am with you always" (emphasis mine). Part of that final commission is to teach and if you read the Rite of Baptism you'll see how prominent that aspect is in the actual rite. Last week we learned that RCIA stands for Rites of Christian Initiation for Adults. It exists in every diocese and parish and is the only way an adult can join the Catholic Church. It is presumed that someone decides to become Catholic after they've come to know Jesus Christ and figures that they belong in the Catholic Church. This is the period known as the Period of Evangelization and Pre-catechumenate. It happens before the person joins the RCIA. Once the person has a conversation with a priest, or RCIA director, the person may seek acceptance into the Order of Catechumens. This happens officially through what is called the Rite of Acceptance. During this Rite, the inquirer states that he or she wants to become a member of the Catholic Church in front of the whole parish community. Presumably, the community agrees and the person officially becomes a catechumen and enters the Period of the Catechumenate. Typically The Period of the Catechumenate lasts just under a year (from September to Easter), although it can last longer. This is the period of teaching. The catechumens learn about Scripture, Church teaching, history and the Catholic Faith. When the catechumen is ready, they have to request Baptism and they are invited to the Rite of Election. Last week we also saw that the Rite of Election is the celebration when all the catechumens express their wish to be baptised to the Bishop and write their names in the Book of the Elect. It is significant that the Rite of Election takes place on the first Sunday of Lent. It means that for the "elect", Lent is a very special time. I am reminded of the retreat that is required for all candidates prior to Ordination. It is important that we have a period of intense reflection. study and prayer before taking such a big step and receiving the Graces that come with these Sacraments. It makes sense that for the rest of us, Lent can also be a time for intense reflection, study and prayer as we remember our baptismal promises (that were likely made for us by our parents). At the Easter Vigil we will all be renewing those promises and the Graces received at Baptism will be renewed, as they are renewed every day we live our Baptism. Come back next week and we'll look at the final step before the Catechumens are baptized or received into the Church. - Image: A young girl is confirmed during Mass following completion of the Rite of Christian Initiation of Children program at St. John of God Church in Central Islip, N.Y. (CNS photo/Gregory A. Shemitz)