Deacon-structing the Catechumenate Part 4: The Scrutinies 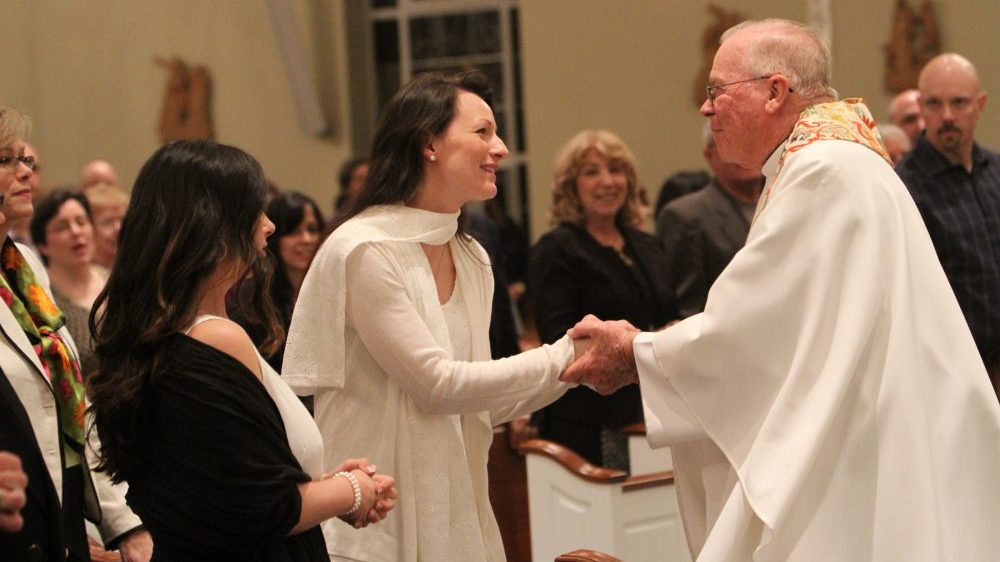 Catechumen Jennifer Russo exchanges the sign of peace with Father John Fitzgerald during the Easter Vigil at St. James Church in Setauket, N.Y., April 19. Russo received the sacraments of initiation -- baptism, confirmation and first Communion -- during the Mass. (CNS photo/Gregory A. Shemitz, Long Island Catholic) (April 21, 2014)
Last week we looked at the RCIA program: the Rite of Christian Initiation for Adults. We saw that this process is pretty standard throughout the universal Church. We also saw that (in previous posts, part 1 and part 2) how the program of receiving people (mainly adults) into the Church is ramped up during Lent. In order to clarify things a bit, I contacted Jerry Galipeau at World Library Publications. Jerry is an expert catechist, an expert in the RCIA program and the author of a book I mentioned earlier, You Have Put on Christ: Cultivating a Baptismal Spirituality. Jerry told me that the practice of baptizing converts to Christianity at Easter seems to have been the usual practice by around 150 A.D., (and firmly established by the middle of the Third Century) following a period of formation in the Christian life and a period of fasting and penance preparing for Easter (the antecedents of the Season of Lent, which did not yet officially exist). But he cautioned me about using the term “received into the Church at Easter.” He said that there is a distinction between the welcoming of other Christians into the full communion of the Catholic Church (in some places the term ‘received into’) at Easter with the original fixing of Easter as the time for Baptism. He wrote: "The RCIA and other documents are clear that baptized Christians can be welcomed into full communion (or received) at any time during the year when their readiness is discerned. For some, this may be Easter. In my opinion, for the majority of others, this could be at any time. Our pastoral practice, however, has been skewed because the vast majority of parishes lump everyone (unbaptized and baptized Christians seeking full communion) together in an RCIA “program” that is fixed in a school-year model, with the Sacraments of Initiation acting somewhat like “graduation for the whole group.” This is, for the most part, far afield from the Church’s vision as expressed in the RCIA." So we have to be careful to see that at the Easter Vigil, many different things may be taking place: some people are being baptised, confirmed and will be making their First Communion; others may already be baptised and so they will be making their "Confirmation". These are the people whom we say are being "received into" the Church. Some people, if they are under the Confirmation age, may just be receiving Baptism and Eucharist. Others, just Baptism. When we talk about RCIA, we are referring to those adults who are being baptised. In most cases, if they are being baptised, then they are also likely being Confirmed and making their First Communion. These are the three Sacraments of Initiation. Now, last Sunday, you may have been at Mass and something called "The First Scrutiny" took place. This is part of the RCIA process that leads the Elect towards their Baptism. The "Scrutinies of the Elect" take place during the three Sundays before Palm Sunday. Scrutiny is a word that means "to search", to look for. In modern English it is used to mean, "a critical observation or examination." That's exactly what it's meant to be. From the RCIA Guide:

"141 The scrutinies, which are solemnly celebrated on Sundays and are reinforced by an exorcism, are rites of self-searching and repentance and have above all a spiritual purpose. The scrutinies are meant to uncover, then heal all that is weak, defective, or sinful in the hearts of the elect; to bring out, then strengthen all that is upright, strong, and good. For the scrutinies are celebrated in order to deliver the elect from the power of sin and Satan, to protect them against temptation, and to give them strength in Christ, who is the way, the truth, and the life. These rites, therefore, should complete the conversion of the elect and deepen their resolve to hold fast to Christ and to carry out their decision to love God above all."

During the Scrutinies, the Elect are expected to take an intense look at their lives. During the First Scrutiny (third Sunday of Lent), the Elect have hands laid upon them and are prayed over and pray that they may reject everything in their lives that is contrary to Christ. Again, from the RCIA Guide:

"143 In order to inspire in the elect a desire for purification and redemption by Christ, three scrutinies are celebrated. By this means, first of all, the elect are instructed gradually about the mystery of sin, from which the whole world and every person longs to be delivered and thus saved from its present and future consequences. Second, their spirit is filled with Christ the Redeemer, who is the living water (gospel of the Samaritan woman in the first scrutiny), the light of the world (gospel of the man born blind in the second scrutiny), the resurrection and the life (gospel of Lazarus in the third scrutiny). From the first to the final scrutiny the elect should progress in their perception of sin and their desire for salvation."

The whole community is not there just to observe. This is a great opportunity for all of us to take a deep look into our own lives. The prayers of the Elect should become everyone's prayers. The purifying of the Elect should become the purifying of the whole community. This year, because we are reading form the A Cycle of Sunday Readings (the Gospel of Matthew), you will not notice different readings for the Scrutinies. But next year and the following you will because for the Sundays when Scrutinies are done at Mass, the readings are always from the A Cycle. Did you go through the RCIA program? Write to me, pedro@saltandlighttv.org and tell me how it was. Do you remember the Scrutinies? - Catechumen Jennifer Russo exchanges the sign of peace with Father John Fitzgerald during the Easter Vigil at St. James Church in Setauket, N.Y., April 19. Russo received the sacraments of initiation -- baptism, confirmation and first Communion -- during the Mass. (CNS photo/Gregory A. Shemitz, Long Island Catholic) (April 21, 2014)