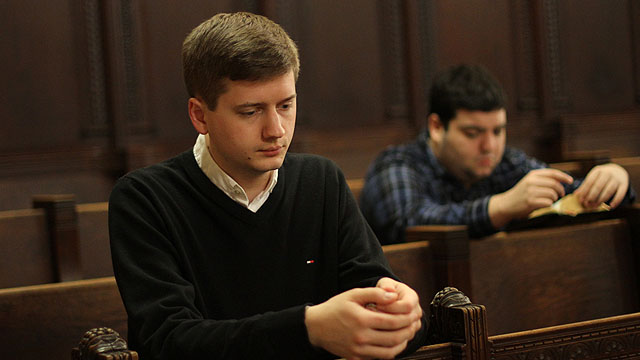 For the last couple of weeks we've been talking about Vocations. We've looked at what it means to be called and how to discern that call. We also looked at the Church’s four Vocations: Ordained Life, Religious Life, Single Life and Married Life. Last week we concluded by seeing some of the more complex teachings about Marriage. Vocation, ultimately is about saying yes to what you've been created for. This week I met Sr. Monique Bourget of the Institute of St. Marcellina (marcelline.org). She is the first of many Perspectives interviews that I hope to do for the Year for Consecrated Life (which Pope Francis has declared 2015 to be). During the interview Sr. Monique said that as she was feeling the “call” as a young 18-year old while doing missionary work in Guatemala, she had to come to a place of surrender. She had to trust God. If God wants you to do something, then you have to trust. But in order to have that kind of trust, you have to have a relationship with God. Prayer is key.** Last week the Gospel at Mass was Mark’s description of the Baptism of Christ (Mark 1:7-11). We can say that Jesus’ baptism was his “call” moment. He literally heard the voice of God saying, “You are my beloved.” His baptism was the beginning of his ministry. In the same way, everyone gets called by God. Isaiah got the call. So did Paul. This weekend (Second Sunday in Ordinary Time) we will hear John’s version of the Call of James, John, Peter and Andrew. The first reading is the Call of Samuel. Are you thinking there’s something wrong with you because you have not heard the Call? I think the problem is that, either we don’t think we’re going to get called- we think that it’s only for prophets and apostles and saints – and so we’re not expecting the call. Or, even if we think that we may get the call, we don’t know how to recognize it, ‘cause we’re looking for something else; expecting something else. But the “call” stories from Scripture give us a few clues that will help us recognize the call when it comes. First, the call doesn't happen in a vacuum. It doesn't happen out of context. We have to first have an encounter with God. Isaiah has a vision of God (Isaiah 6:1--8). He sees God in the temple, sitting on a throne in his majesty. There are angels flying around – seraphs, singing “Holy, holy, holy is the Lord of hosts” (that’s what we try to re-create every Sunday). Then an angel touches Isaiah’s mouth with a burning coal. That’s an experience of the divine. Isaiah has an experience of the divine, before he is called. The same happens to Paul (Acts 9:1-17). Paul has an encounter with Jesus that literally knocks him off his feet: “Saul, why are you persecuting me?” And Paul asks, “Who are you?” “I am Jesus whom you are persecuting.” Paul has quite the encounter with Jesus Christ. But his call comes much later. He doesn't get called right away. He has to go to Damascus and was there, blind for three days – and still, the call happened years later. Next Sunday (Third Sunday in Ordinary Time) we will hear Mark’s version of the call of Peter, Andrew, James and John. From reading Mark you may conclude that the disciples did not know Jesus when he called them, but according to St. Luke (Luke 5:1-11), Peter and the disciples had already met Jesus. Jesus had already healed Peter’s mother in law (Luke 4:38-39). I’d like to think that since these were such small towns everyone must have known each other. Jesus had been around for 30 years. Of course they knew him, if not personally, then at least they knew of him. And everyone was talking about his teachings and his miracles so when Jesus asks to get into Peter’s boat in Luke’s version (which I find most compelling), they are not strangers. But even though Peter knew Jesus he still had not had an encounter with Christ. That’s the same with us sometimes: We may know Jesus and still not have had an encounter with Jesus. And in Luke 5, Jesus takes Peter out into the deep and there’s the miraculous catch of fish. That’s an encounter with the divine. Come back next week to find out what Scripture says are the two other stages of the Call.

**We are dedicating some of our Weekly Edition of Perspectives [https://saltandlighttv.org/perspectives/] space to Consecrated Life. For the next months we will be speaking to many people from different backgrounds, who are living the Consecrated Life. The first episode, with Sr. Monique Bourget, IM will air on Friday, February 13th at 7 and 11pm ET / 8pm PT. Perspectives: The Weekly Edition airs every Friday and Sunday at 7 and 11pm ET / 8pm PT.