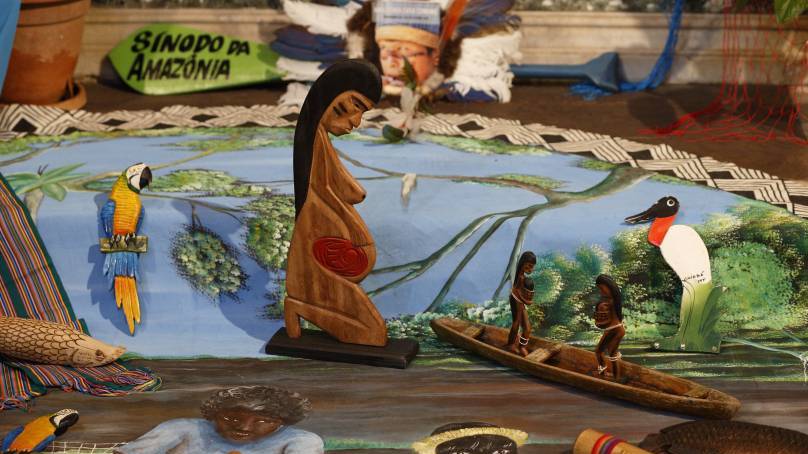 A wooden statue of a pregnant woman is pictured in the Church of St. Mary in Traspontina as part of exhibits on the Amazon region during the Synod of Bishops for the Amazon in Rome Oct. 18, 2019. Several copies of the statue were stolen from the church and thrown into the Tiber River Oct. 21. (CNS photo/Paul Haring)
A month ago, Pope Francis was heard apologizing for the fact that two men had taken statues from the Church of St. Mary in Traspontina on Oct. 21 and tossed them into the Tiber River. One of the statues was described as Pachamama. Apparently, the men who took the statues did so because they claimed they were being used as idols.

Perhaps that is all that you heard about the Synod on the Amazon.

I remember traveling to Peru as a child and learning about the Inca culture and about Pachamama. When I heard about this incident, I exclaimed out loud, “Oh pachamama; that’s Mother Earth.” I suppose most people in South America are familiar with Pachamama. I’m sure that in Peru, Bolivia, Ecuador, and maybe even other places, they are also familiar with Inti, Father Sun. After the incident, Paolo Ruffini, prefect of the Dicastery for Communication, said in a press conference that the statues “represented life, fertility, Mother Earth”. This may explain why Pachamama has been referred to as a “fertility goddess”. The statue in question was present at the beginning of the synod when Pope Francis planted a tree in the Vatican Gardens and entrusted the synod to St. Francis of Assisi. It was used again during a prayer and procession from the Basilica of St. Peter to the Vatican synod hall and a few days later during the praying of the Stations of the Cross. Outside of these times, the statue was kept in the Church of St. Mary in Traspontina, where other synod-related events took place.

So… my question is: What does the Pachamama symbolize for indigenous Catholics of the Amazon region?

According to Wikipedia, Pachamama is a goddess that is revered by the indigenous people of the Andes. She is also known as the earth/time mother. Modern Andean cultures refer to her as Mother Nature. In Inca mythology, Pachamama is a fertility goddess who presides over planting and harvesting, embodies the mountains, and causes earthquakes. She is also an ever-present and independent deity who has her own self-sufficient and creative power to sustain life on this earth. Pachamama is the mother of Inti, the sun god, and Mama Killa, the moon goddess.  The Wiki entry also adds that, after the Spanish conquest, conversion to Roman Catholicism took place and the figure of the Virgin Mary was equated with that of the Pachamama for many of the indigenous people. At the time when the Pachamama Vatican story broke, my sense was that for Catholic indigenous people, Pachamama is not a goddess, nor is it a representation of the Virgin Mary. She is simply “mother nature”, but not as a deity that is adored or worshiped. It is simply our planet Earth, not unlike what North American indigenous people refer to as “Turtle Island”. I suspect that part of the confusion is that in the course of the whole scandal, the statue was referred to as “Our Lady of the Amazon”, “fertility Goddess”, and “Mother Earth”. I then read an interview with Bishop Felipe Arizmendi, Emeritus of San Cristobal de las Casas in Chiapas, Mexico. According to Bishop Arizmendi, this was not a matter of idolatry. Having images of Pachamama does not mean that they were adored – no one is adoring Mother Earth or other deities. Pachamama is not a goddess; it is not an idolatrous cult. Pachamama, as well as Inti and Mama Killa, are symbols of Amazonian realities. These are cultural realities – they have religious motivation – but it is not one of idolatry or worship, because for Catholic indigenous people, worship and praise is given alone to God. Bishop Arizmendi was clear to state that one should not accuse the Holy Father of idolatry. He said that at the opening ceremony when the statue first made its appearance, Pope Francis only prayed one simple prayer and it was the Lord’s Prayer: “There is no other God but our Father in Heaven.” He then explained that once, while he was at a gathering of the Latin American Episcopal Conference in Bolivia, the theme had to do with the various names of God among the First Nations of South America. He remembers asking an indigenous woman if for them Pachamama and Inti were gods. The woman said, “Those who have not been evangelized do consider them gods; for those who are already evangelized, they are not. Rather they are God’s best gifts for us.”

Bishop Arizmendi explains, “That’s what they are. They are manifestations of the love of God, not gods.”

He then remembered that in his previous diocese he would often hear the people speaking with great love and respect of “Mother Earth”. This would make him uneasy because he felt that he only had his own mother, our Mother Mary, and our Mother, the Church. But he would see indigenous people kneeling and kissing the earth. This would bother him. But the more he lived with the people he came to understand that they did not adore the earth like a goddess, but rather, they valued her and recognized her as a true mother, because she is the one that feeds us, that gives us water, air, and everything that we need to live. They did not consider her a goddess; they did not adore her; they only expressed their respect and prayed giving thanks to God for her. Here in Canada, I think I can say the same thing. I have been at many sunrise ceremonies with indigenous people who pray to each of the Four Directions. They believe that all good things come from the East. That is where the sun rises and where the freshening wind brings warm rain. From the South, the warming south winds bring new growth, gentle rain, and healing sunshine. The sun sets in the West giving us glorious colors in our life. The West also symbolizes death. From the North, the winds sometimes bring stormy weather and snow. When we pray to the Four Directions, we do so with great reverence. It’s easy to watch this from the outside and call it idolatry, but if you participate and understand what they are doing and why, you would understand that everything in the created world, everything in nature, gives us life.

We pray to God in thanksgiving for these gifts.

When we were working on Creation , our six-part series on the environment, we took great inspiration from St. Francis, who calls Mother Earth “sister”. In his Canticle of the Creatures, no one thinks that St. Francis was idolizing the Earth. He praises and thanks God for our “sister Mother Earth”. He also praises God for our “Brother Wind”, our “Brother Sun”, “Sister Moon”, and so many other “creatures”. Following St. Francis’ example, after the Fifth Episcopal Conference of Latin America and the Caribbean, or "Conference of Aparecida", in 2007 Pope Benedict XVI in the Aparecida Document, refers to “our sister, Mother Earth”. The document says that our “sister, mother earth” is our common home and the place of God’s covenant with human beings and with all creation. To disregard the mutual relationships and balance that God himself established among created realities is an offense against the Creator, an attack on biodiversity and ultimately against life. The missionary disciple to whom God has entrusted creation must contemplate it, care for it, and use it, while always respecting the order given it by the Creator” (DA 125). In Laudato Si’, Pope Francis writes:

When we can see God reflected in all that exists, our hearts are moved to praise the Lord for all his creatures and to worship him in union with them. (LS 87)

He then writes that this does not “imply a divinization of the earth which would prevent us from working on it and protecting it in its fragility” (LS 90). Bishop Arizmendi concluded his interview by stating that we should not judge or condemn as idolatry what isn’t. We should not judge what we do not understand. Let’s remember that many non-Catholic Christians do not understand why Catholics have so many statues and accuse us of idol worship. They are convinced that we worship Mary and the saints because we have their statues in our churches and homes. But no Catholic would conclude that having those statues means that we worship them. It is possible to have statues of Mary and the saints and use them to help us praise and worship God, who is the one and only God. It may seem strange to us, non-indigenous people, to have statues or representations of things that are not saints.  But, no one would conclude that having a Christmas tree or a national flag inside the church means that we idolize those items or what they represent. Neither would we question bringing up offerings of bread during Holy Thursday or fruits of the harvest during Thanksgiving as idolatry. It may be hard for us in Europe and North America to understand how the Faith is inculturated in other cultures, but it is. Our Faith is one that lives in culture. That is where it is made flesh. It is possible to have representations of anything that reminds us that God is the one Creator who loves us, cares for us, and provides for us through his wonderful work of Creation. Perhaps today, on the Solemnity of Our Lord Jesus Christ, King of the Universe, it is fitting to remember that there is only one Sovereign and to Him be all glory, all power and all blessing. Everything else is there to help us come closer to Him.