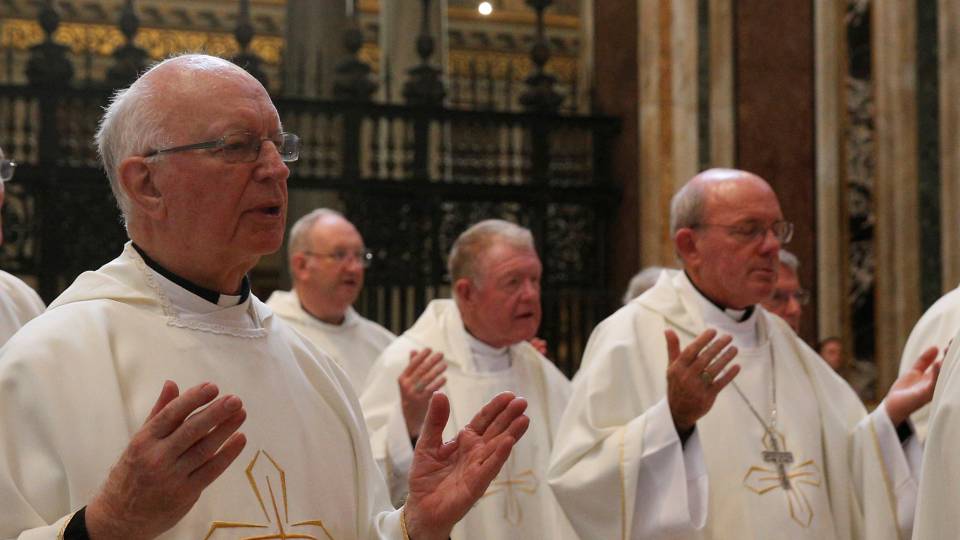 Msgr. Harry Entwistle (left), who recently retired as head of the Anglican Ordinariate in Australia, was a married Anglican priest with two children when he converted to Catholicism in 2012 (CNS photo/Paul Haring)
Last week I began a response to an email I received from Maureen Foster from Winnipeg. Maureen explained that she had just attended the ordination of a married man to the priesthood (a married United Church minister who had converted to Catholicism). Maureen asked:

Can you explain how this came to be and what possible impact this will have for other Catholic married deacons from our diocese in the Roman Rite? Do they all now have the option of requesting ordination to the priesthood? If not, why? If yes, what impact could this have on the celibate non-married priesthood?

Last week I explained that the married priesthood has been part of our Catholic tradition since the time of the Apostles. But over time, celibacy became the norm. Last week, the Church canonized John Henry Newman.  Newman was an Anglican priest who converted to Catholicism. While he was not married, there were other Anglican clergy who converted to Catholicism during his lifetime. I've heard from those who know Newman much better than I do, that he believed that celibacy was necessary for the priesthood, but he is known to have lamented on the fact that the Catholic Church didn't know what to do with these men. Clearly this is not a 20th century issue. Newman always referred to a passage from St. Paul’s 1st letter to the Corinthians in explaining why he had never married. St. Paul wrote:

In 1951 Pope Pius XII had granted special permission for a married Lutheran pastor to be ordained to the Catholic priesthood. Then, in his 1967 encyclical, On the Celibacy of the Priest, Pope Paul VI called for a study of married ministers of other churches who converted to Catholicism to continue to exercise ministry. But it wasn’t until 1980 that Pope John Paul II allowed an exception for married Episcopal clergy who wanted to become Catholic priests. Since then, Vatican officials also have considered requests from members of other Christian denominations. There are approximately 120 active Roman Catholic priests in the United States who are married (not sure how many in Canada or worldwide). Originally this practice only applied to men who had been Episcopal/Anglican clergy, but now they come from the Lutheran, Presbyterian, or Methodist churches. After they and their families entered into full communion with the Church, they would have had to petition Rome for permission to be ordained as Catholic priests. They would have had to go through priestly formation before ordination since the Catholic Church does not recognize ordination in other churches as valid.

As it stands right now, the celibate priesthood is not doctrine.

It is a discipline*. Because of this, it can be changed; it is "reformable". However, right now, this is the discipline: For men to be ordained to the priesthood in the Latin Rite of the Catholic Church, they need to be celibate. Married permanent deacons are ordained, but if a man who is single is ordained to the permanent diaconate, he cannot marry after his ordination. Again, a married man can be ordained, but an ordained man cannot get married. If the wife of a permanent deacon dies, he cannot re-marry. And, right now, a permanent deacon who is married cannot be ordained to the priesthood. What the Church has been exploring these past years (and clearly since the mid 1990s) is the possibility of ordaining married men to the priesthood in areas where there are no priests. (Pope Francis first spoke about it in 2017.) This is why this topic has come up in the context of the Amazon Synod. It is a conversation that has also been had in relation to Canada’s north. However, even if this “dispensation” were to be granted, it is likely that it would be just that, a dispensation that is very specific to certain regions and certain circumstances. Those men may even be limited in their priestly ministry and perhaps even to their own dioceses. I can add – and I think that this is what Newman referred to and why St. Paul wrote what he wrote – it is very difficult to be in full time, active priestly ministry and at the same time have a healthy marriage and family. I am not saying it’s not possible and I am not saying we shouldn’t have married priests, but there are very valid reasons why it’s more convenient to have un-married, celibate priests. (Just think what the Church would do with a divorced Catholic priest!) After my response to Maureen, she wrote back:

I know we have a tradition of married priests, but for most, this is not a situation that they have experience with. My guess is most Roman Catholics would probably say married clergy is not allowed. Not many Roman Catholics have ever met a married priest. (I'm 46 years old and I've only ever heard of married priests in the Eastern Rite Church or met men and women who are married priests from Protestant denominations.) I suppose this is true when it comes to deacons too. My children really don't know any permanent deacons. I experienced one ordination as a child. So I think we all need a refresher on the topic!

I hope this has been useful. I have written extensively on the Permanent Diaconate, so I won’t go into that at this point. Maureen added:

I think the biggest confusion is why it would be allowed for a convert from a Protestant denomination and not allowed for our Catholic "born and raised" deacons. I get the feeling some in the Catholic Church see it as unfair or jump ahead and think of it as a scary idea of change with regards to married priests. Something you have said in your response below makes me think I may be on the right page with things here. As I have tried to read up on this a bit, I believe that this allowance has more to do with bringing together the Protestant and Catholic Churches back together again one day. Opening the door to welcome and unite those who may wish to come back to the Catholic Church - but already in a role of ministry, not wanting to give up a true calling by God.

Thank you, Maureen, for your question and your comments. Perhaps, in closing, I can say this: We do have a tradition of married priesthood in the Catholic Church. This should not be a scary thing. These men are not automatically allowed to be priests. They still have to go through training and ordination. I think Maureen is right that it is a way to bridge the gap between denominations and the Catholic Church, but it's also a way to honour a call that someone may have had outside of the Church after they come into full Communion. It's a great question and a great conversation. Send me your comments. -- *A reminder that discipline is NOT doctrine. Disciplines are universal laws of the Church. They may include particular laws of a diocese, liturgical norms, or Church practice. They require obedience by all Catholics. Those who reject them are considered to be in a state of "disobedience".