All about Blessed John Henry Newman – to be canonized October 13 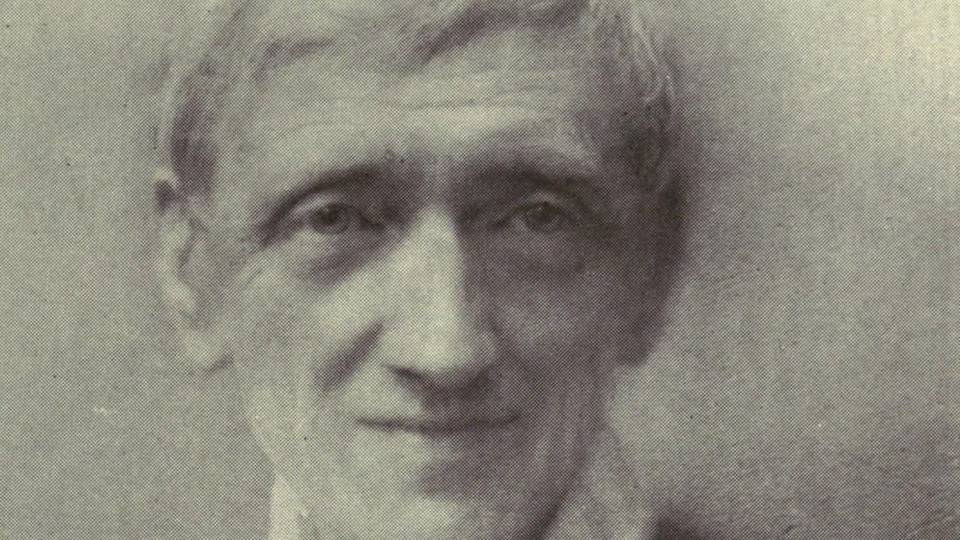 Detail of a painting of Newman, by Jane Fortescue Seymour, Lady Coleridge. Source: Wikimedia Commons
Attempting to present a brief biographical sketch of a man like Blessed John Henry Newman feels rather like trying to describe a giant by exhibiting a portrait of his little toe. However you approach the task, you can only scratch the surface of who he was and how he influenced the world around him. That would be true of any person, but it is especially true of a man of such depth of intellect, feeling, spirituality, and literary talent as Newman and even more so given a lack of space in which to elucidate the times in which he lived. Knowing, thus, that the following account can never be anything but woefully inadequate, I present a few remarks on this soon-to-be-saint of the Roman Catholic Church.

Do not suffer any illusive notion about me to spring up in your mind. No one ever treats me with deference and respect who knows me – and from my heart I trust and pray that no one every may. I never have been in office or station; people have never bowed to me – and I could not endure it. I tell you frankly, my infirmity I believe is, always to be rude to persons who are deferential in manner to me.

On 21 February 1801, a son was born in London, England, to John and Jemima Newman, their firstborn. John Henry was a bright boy and was given a fairly typical education for a middle-class Englishman – boarding school from the age of seven and then Oxford, though he went up (as they say) two years earlier than most. At Oxford he continued to excel in his studies but managed basically to fail his final exams. (This was largely due to a change in the university system, which left him poorly prepared for the exams, combined with a nervous breakdown.) However, his intellectual promise and original thinking were recognized, and he was offered a prestigious fellowship at Oriel College (one of the many colleges comprising the University of Oxford), which he held until just a few days before his entry into communion with the Roman Catholic Church. Newman was ordained a priest in the Church of England and became the vicar of an important parish in Oxford. Although early in life he had held religious convictions which tended toward the Evangelical, he gradually abandoned Protestantism altogether for more “Catholic” views which stressed the importance of authority, defined doctrine, tradition, the sacraments, and ritual. Faced with increasing liberalization in the Anglican Church and in English society, Newman and men like him made a stand for their vision of their Church, proclaiming it from the pulpit and in national publications. Shy, sensitive, self-conscious Newman became one of the most outspoken members and an unintended leader of this movement. Known as the Oxford, or Tractarian, Movement, it was highly controversial at the time but has strongly influenced the modern Anglican Church and is considered to be the foundation of modern Anglo-Catholicism. A combination of his own thinking and writing and events within the Anglican Church led Newman to a conclusion he had been avoiding and even fighting against: that the Church of Rome was the same as the one true Church founded by Jesus Christ and led by the Apostles and, more importantly, that no other Church on earth had such a claim. On 8 October 1845, at the village of Littlemore outside Oxford, John Henry Newman knelt before Blessed Dominic Barberi, an Italian priest of the Passionist Congregation, and asked to be received into the Roman Catholic Church.

I have a good name with many; I am deliberately sacrificing it. I have a bad name with more – I am fulfilling all their worst wishes and giving them their most coveted triumph – I am distressing all I love, unsettling all I have instructed or aided – I am going to those whom I do not know and of whom I expect very little – I am making myself an outcast, and that at my age. Oh, what can it be but a stern necessity which causes this?

Two years after his conversion, Newman was ordained a Catholic priest in Rome and, after some consideration, undertook the mission of founding an English branch of the Oratory of St. Philip Neri at Birmingham. Controversy had been a defining note of Newman’s Anglican life, and it followed him into his Catholic life. Apart from the anti-Catholicism endemic in English society, he also had to deal with jealousy, misunderstanding, and incompetence within his new ecclesial family, which frustrated many of the projects he attempted. An intellectual powerhouse, Newman continued to wield his pen in pursuit and defence of the truth. Some of his more famous texts are Apologia Pro Vita Sua, Idea of a University, Grammar of Assent, and Letter to the Duke of Norfolk. But no less important are his devotional writings, which reveal a man of humility, gentleness, joy, and loving abandonment to God. After enduring years of strife and controversy and attacks from all quarters, toward the end of his life, Newman at last achieved a vindication in the form of two honours, which he never sought or desired but which nevertheless gave him some joy and satisfaction. The first was an honorary fellowship at his old Oxford college of Trinity in 1877. And then in 1879 came the unexpected news that the new pope, Leo XIII, intended to make him a cardinal – to the great joy of the people of England, both Catholics and Protestants. He died on 11 August 1890.

Farewell, but not for ever! brother dear, Be brave and patient on thy bed of sorrow; Swiftly shall pass thy night of trial here, And I will come and wake thee on the morrow.

– final lines of The Dream of Gerontius

In 2001, when Jack Sullivan began experiencing severe back pain, doctors discovered a debilitating spinal disorder which could lead to paralysis. Following a surgery which should have taken months to recover from, Sullivan prayed to Cardinal Newman. He says he “immediately felt an intense heat” and also “joy and confidence,” and to everyone’s amazement he got up and walked. In addition to that, Sullivan’s doctor could find no explanation for the level of his spine’s recovery. In 2013, Melissa Villalobos was in the early stages of a pregnancy. When she began to experience bleeding, her doctor found that there was a hole in her placenta, which had become partially detached. This was a great risk to the life of her baby, so she was ordered on strict bed rest. Soon after, she found herself in a moment of crisis: alone on her bathroom floor, bleeding profusely and with no way to call for help. She prayed, “Please, Cardinal Newman, make the bleeding stop.” The flow of blood stopped immediately, and a subsequent scan showed that the placenta had healed and the baby was doing just fine.

Newman is already highly regarded among Oxford Catholics as an unofficial (because uncanonized) patron saint, so I think it highly likely he will join St. Thomas More as a patron of the Oxford University Catholic Chaplaincy. And of course, there are several colleges and universities and campus chaplaincies named for him that will happily claim him as their patron in a new way. But also in a more general way, Newman will have a broad appeal: for university students and lecturers, Catholic teachers, apologists, writers, and converts, as well as anyone who has ever been misunderstood.

To have Thee is to have everything I can have. O my Eternal Father, give me Thyself. I dared not have made so bold a request, it would have been presumption, unless Thou hadst encouraged me. Thou hast put it into my mouth, Thou hast clothed Thyself in my nature, Thou hast become my Brother, Thou hast died as other men die, only in far greater bitterness, that, instead of my eyeing Thee fearfully from afar, I might confidently draw near to Thee. Thou dost speak to me as Thou didst speak to Thomas, and dost beckon me to take hold of Thee. My God and my all, what could I say more than this, if I spoke to all eternity! I am full and abound and overflow, when I have Thee; but without Thee I am nothing—I wither away, I dissolve and perish. My Lord and my God, my God and my all, give me Thyself and nothing else.

– from the meditation "God Alone"