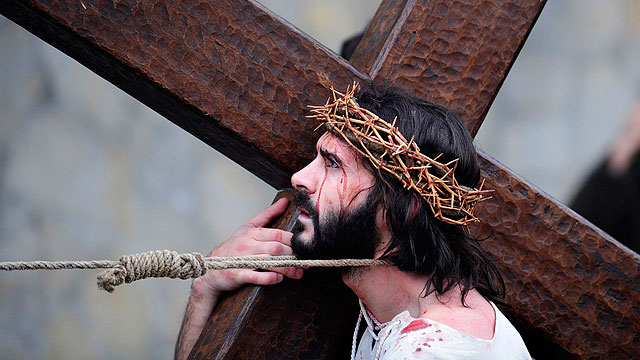 CNS photo/Vincent West, Reuters
In part 1 we looked at fasting and abstinence and in part 2 we looked at the meaning of suffering. Today, let me share with you something I like to do as part of my prayer (and we all know that Lent is a time to re-focus our prayer life.)
I love Scripture. I take to heart the words of St. Jerome, “Ignorance of Scripture is ignorance of Christ.” I truly believe that we must read the Bible daily. We must read it, study it and pray with it. That is definitely one way to get closer to Christ. But it’s also a good way to measure how you’re doing in your own life. When I was doing my pastoral placement while studying for the Permanent Diaconate, we were required to do “scriptural reflections” on specific pastoral experiences we’d had. So if I had met a patient who was in crisis in the hospital, I had to reflect on that experience by looking at it through a scriptural lens. I loved doing this and it was extremely helpful. Basically it’s looking at the life of Jesus (or other Bible characters) and seeing what it tells me about my life.  A lot of people will tell us that the Gospels are not factual. That Jesus didn’t really multiply the loaves and the fishes or that it wasn't really water turned into wine, or that Lazarus wasn't really dead. They’ll say that “resurrect” meant something else or that Jesus didn't really die on the cross or didn't really “resurrect.” See, (and I may get some responses from you for saying this) I don’t know if it really matters whether Jesus literally fed 5000 people with 5 loaves and 2 fishes or if he really walked on water; what matters is how these stories affect my life today. What really matters is the TRUTH behind all these stories.  The Bible may not always be FACT - but it is always TRUTH.
Let me explain to you the difference between “Fact” and “Truth.”
Let's say you ask my five-year-old son how tall I am. My son says that I am 20 feet tall. Clearly that statement is not factual. I am not 20 ft. tall. But the truth behind that statement is that I am much, much taller than he is. He is short and I am a lot taller than him. So, in a way, his statement is true just not fact. Understand?
So the Bible is full of stories to show us the Truth.  That’s why we have to read the Bible as THEOLOGY and not so much as HISTORY. When we look at the Gospel stories and during Lent when we look at all the Passion Narratives, in trying to understand all the suffering, we must look for the Truth that is found in them.
The first Truth that I see is (as I said in part 2) that, although we may not be able to understand suffering, we believe in a God who suffers with us. He reigns from the Cross.
Jesus had to die because in dying He destroyed death. He destroyed Sin. His death frees us. In the Gospel of John, Jesus says: "I tell you the truth, unless a kernel of wheat falls to the ground and dies, it remains only a single seed. But if it dies, it produces many seeds." (A cliché from Jn 12:24?) What I take from this passage is that unless I die I will not produce fruit.  It means I have to die to myself. It means I have to not be so selfish and self-centred. If I stop being so self-consumed and focus a little bit more on others, chances are I will produce some good fruit. Lent is a good time to practice dying to ourselves.
Jesus dying on the cross in a way represents how we each have to die:  We have to die to ourselves. In the Gospel of Matthew Jesus says to his disciples, “If anyone would come after me, he must deny himself and take up his cross and follow me." (Mt.16:24). Deny yourself. That means stop being so self-centred.
In Luke, Jesus says: "And anyone who does not carry his cross and follow me cannot be my disciple." (Lk 14:27) Does "our cross" mean, “our suffering”?  Does it mean that if I am not willing to suffer, then I can't be a follower of Jesus?  Is He preaching a religion that requires suffering? But as I said last week this doesn’t mean that I have to create my own suffering. Our cross is not suffering for the sake of suffering.
What does Jesus say about suffering?  He healed the sick, he cured the lame and the blind; he resurrected Lazarus. He fed the hungry. So Jesus fought against suffering at every turn. In fact, when Lazarus died, people chastised Jesus for not going to Lazarus when he was sick and curing him. (Jn: 11:4) When he heard this, Jesus said, “This sickness will not end in death. No, it is for God's glory so that God's Son may be glorified through it.” So Lazarus died so that God may be glorified through it.
On the fifth Sunday in Lent, this year (Cycle B) we will hear the reading from John 12:20-33 about the kernel of wheat dying, that I mentioned above. It’s worth reading the whole passage. Jesus says:

“The hour has come for the Son of Man to be glorified. Amen, amen, I say to you, unless a grain of wheat falls to the ground and dies, it remains just a grain of wheat; but if it dies, it produces much fruit. Whoever loves his life loses it, and whoever hates his life in this world will preserve it for eternal life. Whoever serves me must follow me, and where I am, there also will my servant be. The Father will honor whoever serves me.”

He says it in response to some Greeks who wanted to see him. He’s speaking about what we have to do if we want to follow him. But in a less-known passage, which follows, he says,

“I am troubled now. Yet what should I say? ‘Father, save me from this hour’? But it was for this purpose that I came to this hour. Father, glorify your name.” Then a voice came from heaven, “I have glorified it and will glorify it again.” The crowd there heard it and said it was thunder; but others said, “An angel has spoken to him.”
Jesus answered and said,
“This voice did not come for my sake but for yours.
Now is the time of judgment on this world;
now the ruler of this world will be driven out.
And when I am lifted up from the earth,
I will draw everyone to myself.”

He said this indicating the kind of death he would die.
Jesus is saying that some suffering glorifies God. Which kind of suffering? Self-centred suffering won't glorify God, that's for sure. He also says that we must accept the suffering that comes with following Him.
In the Passion of the Christ by Mel Gibson there’s a very moving scene: Jesus is carrying the cross on the way to his crucifixion. He has been tortured and can barely stand or walk. His face is bruised and bleeding and his eye is swollen shut. He has fallen a lot more than three times. Mary, his mother is trying to get to him through the crowds. She finally breaks through as Jesus falls one more time. He looks up at her and says: "See Mother, I make all things new."
Jesus came to make all things new.  He came to renew.  He talked about a new commandment: Love one another. A new Covenant: His blood is the blood of the new Covenant. In Mark He says: "And no one pours new wine into old wineskins. If he does, the wine will burst the skins, and both the wine and the wineskins will be ruined. No, He pours new wine into new wineskins.” (Mark 2:22)  And how does He do this? By suffering and dying on the Cross. Lent is a time when we focus on dying to ourselves – even if it means a little suffering – so that we can glorify God. That, in turn, will make us new. That is why Lent is also a time for transfiguration. The season of Lent may begin with the story of Jesus going into the desert, but the second Sunday in Lent always has the story of the Transfiguration.
When Pope Francis was interviewed for America Magazine and was asked, “Who is Jorge Mario Bergoglio?” he paused. He thought for a bit and then he said, “I am sinner. I am a sinner, whom the Lord has looked upon.”
That’s who we are: sinners, but that is just half of the story: We are sinners, whom the Lord has looked upon. Lent is not Lent if it doesn’t lead to Easter. Lent is a time when we focus a bit more on our sinfulness because the Lord has looked upon us; because Easter is just around the corner.
Come back next week and we’ll look at the two-fold character of Lent.
--