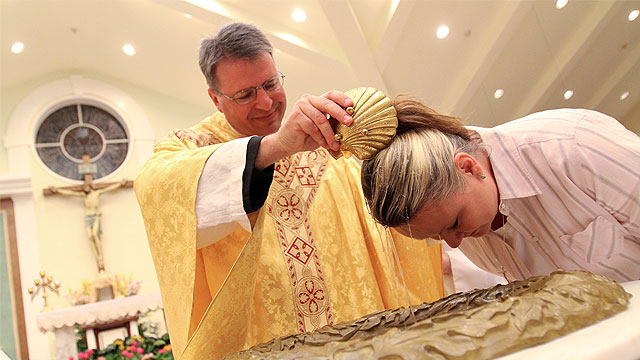 So far in part 1, we looked at questions people have regarding fasting and abstinence, in part 2 we looked at suffering and in part 3 we looked at what Scripture has to tell us about why Jesus had to suffer.  I think when people think of Lent, that’s what they think about: fasting, abstinence and suffering. Add to that penance.
It is true that Lent is a penitential season, but do you know that the word “Lent” comes from the old English word, “lencten” which  was the word used for “Springtime?" It comes from the old Germanic: “Lengen-tinza” which literally means “long days” (think of the English word “lengthen,” to make long – that’s the same root as the word Lent.) So the word 'Lent' refers to the lengthening of days; to the light that is defeating the darkness.  I think most of us think of penance and fasting when we think of Lent, but Lent is also about light defeating darkness. That’s what we see in the fourth Sunday of Lent this year. (On 4th Sunday in Cycle B with Jesus speaking with Nicodemus and also in Cycle A with the story of the man born blind).
How many of you, when you think of Lent, think of Baptism? (I would hope that those preparing for Baptism are thinking of Baptism during Lent; but the rest of us?) Recently, I received a book by Jerry Galipeau titled, You Have Put On Christ: Cultivating a Baptismal Spirituality. In it, he says that Lent is a baptismal time. He quotes the Second Vatican Council Document Constitution on the Sacred Liturgy, #109:

“The season of Lent has a twofold character: primarily by recalling or preparing for baptism and by penance, it disposes the faithful, who more diligently hear the word of God ad devote themselves to prayer, to celebrate the paschal mystery. This twofold character is to be brought into greater prominence both in the liturgy and by liturgical catechesis.”