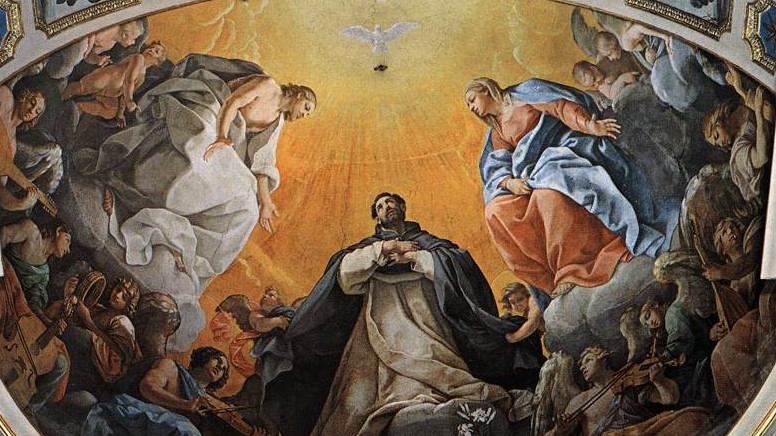 The Glory of St Dominic by Guido Reni in the Basilica of San Domenico in Bologna, Italy. Source: Wikimedia Commons
Recently, during the Beatification Mass for Cosme Spesotto, Rutilio Grande, and companions, I found myself having to explain a little bit about the process that we informally call “making saints”. I was reminded of a quote from Cardinal Thomas Collins of Toronto from an interview he did with Mary Rose Bacani for our show Catholic Focus some years ago:

It’s not the pope that makes saints… God makes saints. The process of declaring someone a blessed and then a saint, this is a recognition for our sake…. It is a way for each one of us to be inspired and led with certainty to make the invocation of these servants of the Lord.

This is the first thing we need to remember when speaking about canonizations:  Canonization does not mean “making saints”.   A quick review All of us are created for Heaven. That means that all of us are created to be saints. That’s really, in short, what a saint is: someone who is in Heaven. Everyone who is in Heaven is a saint. However, the Church gives us a list – it’s called the “canon” – of people that we know for sure are in Heaven. We all know of people that we are certain are in Heaven, but they may never be officially proclaimed by the Church as saints. We can say that (maybe) they are saints with a small s. When the Church proclaims someone a saint, they are Saints with a capital S. The canon of saints is more than just a catalogue of people that the Church is certain are in Heaven. The saints that are listed in the canon are the people who, other than being in Heaven, lived heroic lives of holiness and who are great models for the rest of us. And so, I’m sure my grandmother is in Heaven, but she is not a model of heroic holiness for the whole Church. That’s the second thing you need to remember about canonizations: When the Church canonizes someone, their names are officially being entered into the canon of saints, therefore proclaiming them, officially, as saints whose heroic lives are models for the Church and can be publicly venerated. This is why the process of canonization is not simple. Some could say that it’s bureaucracy, but if you think about it, confirming that someone lived a heroic life of holiness and being able to confirm that they are, indeed, in Heaven, is serious business.   A quick history It used to be that people were proclaimed saints by popular  acclamation. This was definitely the case for the first 450 years of the Church.  According to Wikipedia, there are 1085 early Christian saints. These are mostly people, like the Apostles, that were already considered saints while they were alive and already had a cult following before their death. Most of these were martyrs. The early Church would venerate these people on the anniversary of their death. By the 4th century, the list of what the Church called “confessors” – that is, those who had confessed their faith, not by dying, but by their lives – began to be venerated publicly. Eventually the Church created a calendar of saints, which, of course, got pretty full very fast. In the early Church, bishops dictated who could be venerated as saints in their own dioceses. Around the 10th century, popes began making official decrees declaring that Catholics could venerate a particular holy person. Still, there was no formal process. However, situations arose when there was conflict or disagreements between bishops. In some cases, some people were considered to be worthy of being venerated universally, not just in a particular region or diocese. This made it more and more necessary for a formal process to be developed. By the 11th century, popes began almost exclusively to be the ones to authorize public veneration of a holy person. It was around this time that it was decreed that the virtues and miracles of persons who were considered for public veneration should be examined officially. Various norms were developed by Pope Urban VIII in Caelestis Hierusalem Cives of 1634 and Decreta Servanda in Beatificatione et Canonizatione Sanctorum of 1642. However, it was Pope Benedict XIV who in the 1738 De Servorum Dei Beatificatione et de Beatorum Canonizatione elaborated on the procedural practices of the time. It was this work that dictated the norms until 1917. The basic procedures described in Pope Benedict XIV's book were incorporated into the first collection of Church laws and decrees, the Code of Canon Law of 1917, which governed the procedure until it was revised by Pope John Paul II in the 1983 Code of Canon Law. The first canonized saint was St. Udalric, canonized by Pope John XV in 993. Since then, some 10,000 men and women have been “raised to the altars”. The Catholic Church has recognized the heroic sanctity of kings and queens, priests, nuns and religious brothers, married couples, lay men and women, slaves, teachers, students, children, and old people. We have saints from every continent, language, and race. There are saints who were doctors, scholars, farmers, and musicians. Some were rich, some were poor. Some were educated, some were not. All of them were people who struggled with sin – some struggled with addictions, others had been in adulterous relationships, some were traitors, and others had been thieves. What makes them saints is not that they were perfect but that they always got back up, striving to find holiness, realizing their desperate reliance on God’s grace. On All Saints' Day in 2017, Pope Francis said:

"The Solemnity of All Saints is 'our' celebration: not because we are good, but because the sanctity of God has touched our life. The Saints are not perfect models, but people through whom God has passed. We can compare them to the Church windows which allow light to enter in different shades of colour. The saints are our brothers and sisters who have welcomed the light of God in their heart and have passed it on to the world, each according to his or her own 'hue'. But they were all transparent; they fought to remove the stains and the darkness of sin, so as to enable the gentle light of God to pass through. This is life’s purpose: to enable God’s light to pass through; it is the purpose of our life too."

It is because of this that they are in Heaven and why we should model our lives after them.  Come back next week to learn what the actual process is once a person is proposed for sainthood. In the meantime, check out this website and see how many saints you never heard of.

In every blog post, Deacon Pedro takes a particular topic apart, not so much to explore or explain the subject to its fullness, but rather to provide insights that will deepen our understanding of the subject. And don’t worry, at the end of the day he always puts the pieces back together. There are no limits to deaconstructing: Write to him and ask any questions about the faith or Church teaching: pedro@slmedia.org