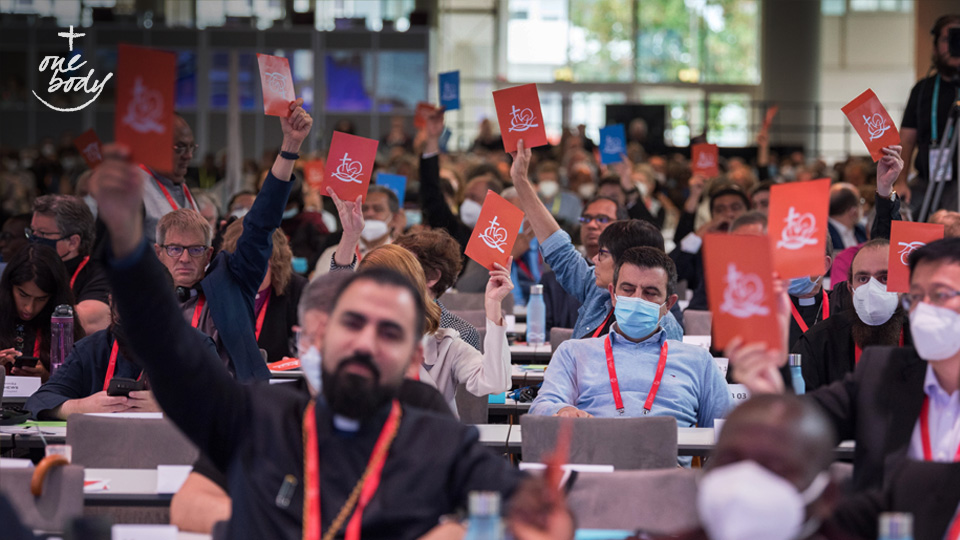 8 September 2022, Karlsruhe, Germany: Assembly participants raise consensus cards into the air -- some orange in affirmation, some blue in disagreement with what is being said -- during a closing business plenary at the 11th Assembly of the World Council of Churches, held in Karlsruhe, Germany from 31 August to 8 September, under the theme "Christ's Love Moves the World to Reconciliation and Unity." (Photo: Albin Hillert/WCC)

Christ’s love moves the world to reconciliation and unity

“The WCC puts unity before justice!” This was the complaint of one Canadian participant in the World Council of Churches’ 11th Assembly in Karlsruhe, Germany. The 65 Canadian participants gathered recently to debrief their experience of the August 31st to September 8th gathering of churches from around the world. The theme of the Assembly was “Christ’s love moves the world to reconciliation and unity.” Back in May, Sr. Donna Geernaert wrote about the Assembly theme in her blog post “An Ecumenism of the Heart.” Over 3,750 church delegates, observers, advisors, visitors, and media came from around the world to Karlsruhe. WCC assemblies are only held every 7 or 8 years, so it was an excellent opportunity for me to attend along with my wife, Rev. Amanda Currie, one of the delegates from the Presbyterian Church in Canada. Another Canadian participant complained that the agenda of the Assembly was too limited, such that there was not enough time to review the work of the WCC’s committees and commissions over the past eight years. The Assembly spent considerable time debating public issues statements, and these concerns were at the forefront of the Assembly. As a result, the dialogue work on “Faith and Order” was given limited attention at this Assembly. There has been a perennial complaint in the ecumenical movement that “life and work” or “faith and order” concerns have taken precedence over the other. “Life and work” is the church’s charity and advocacy work. “Faith and order” consists of theological and doctrinal reflection on church history, doctrine, and structures. These two streams of the ecumenical movement, which began with world conferences on Life and Work (Stockholm, 1925) and Faith and Order (Lausanne, 1927), merged in 1948 to form the WCC. However, there has always been an internal struggle for the heart of the ecumenical movement. In an earlier generation, the slogan “doctrine divides, service unites” epitomized this struggle. The WCC has given considerable attention to this problem in the past, culminating in its “Common Understanding and Vision” study in the 1990s. The Faith and Order agreed statement “The Church: Towards a Common Vision” (2013) is as much a consensus between these two streams of the ecumenical movement as it is between the participating churches. As we arrived in Karlsruhe, it became evident that one central dispute would be about the participation of the Russian Orthodox Church in the Assembly. Although the ROC have been members since the WCC was established in 1948, there were calls to suspend them in response to statements of Patriarch Kirill and other ROC leaders in support of the war in Ukraine, and specifically as a response to the Russkiy Mir doctrine (Russian World) promoted by the ROC. This dispute is emblematic of the complaint about unity before justice. As the Assembly began, the acting general secretary, Fr. Ioan Sauca, explained that the WCC Central Committee had agreed in June that the WCC is a forum for dialogue and encounter between churches, and thus the WCC has never expelled or suspended members even those that espoused apartheid. There are no Ukrainian church members in the WCC, but the Central Committee expressly invited the newly autocephalous Orthodox Church of Ukraine to send observers. During the Assembly, this church formally requested membership in the Council. The Public Issues Committee also proposed a statement on “War in Ukraine, Peace and Justice in the European Region,” which was adopted by the Assembly.

“Reconciliation among Christians is the fundamental prerequisite for the credible mission of the Church.”

“Our world remains plagued by discord, conflict, and division. Wars, discrimination, different forms of injustice and division persist, even among Christians themselves. The globalized world in which we live demands of us a common witness to the Gospel, in response to the pressing needs of our time.”

The Catholic delegation to the Assembly consisted of 20 official observers appointed by the Vatican’s Dicastery for Promoting Christian Unity. Led by Cardinal Kurt Koch, prefect of the Dicastery and Bishop Brian Farrell, its secretary, the team participated in all of the plenary discussions and ecumenical conversations, gave workshops, and made themselves available for engagement with the Assembly as Catholic voices. In addition to the official delegation, a number of Catholics were invited by the WCC to provide theological insights and to assist the Assembly. Catholics are full members of the WCC Faith and Order Commission (the committee that deals with doctrinal matters and fosters dialogue), they provide support to the Commission on World Mission and Evangelism, and they teach in the Bossey Institute’s theological studies program. So, the Catholic participants had considerable experience within the WCC environment and were able to offer their insights to assist the Assembly, as the pope suggested, “to respond to the pressing needs of our time.” The Unity Statement Every Assembly since the WCC was founded in Amsterdam in 1948 has issued a statement on “the nature of the unity we seek.” As signposts on the ecumenical pilgrimage, these statements give a glimpse of the key concerns and perspectives of the churches along the way. The 11th Assembly statement builds upon the theme “Christ’s love moves the world to reconciliation and unity,” pointing to the Christological centre of the ecumenical movement: “the vital search for agreement in faith, the working together in service to the world, the walking the way of discipleship together; all these are stirred by the love of Christ, who moves our hearts through the Holy Spirit.” The answer to the complaint that the WCC puts unity before justice is found in an understanding of unity and justice that are inseparable. There can be no unity which allows injustice to continue. There is no justice that continues to foster division. As Pope Francis said, “Ecumenism and Mission belong together and interrelate.” --- Further reading Pope Francis, Message to the World Council of Churches’ 11th Assembly, Karlsruhe, Germany, August 31st to September 8th, 2022. WCC 11th Assembly, Unity statement. WCC Commission on Faith and Order, The Church: Towards a Common Vision (2013). Public Issues statements of the 11th Assembly Confronting Racism and Xenophobia, Overcoming Discrimination, Ensuring Belonging. The Living Planet: Seeking a Just and Sustainable Global Community. Reconciliation with Indigenous Peoples. Seeking Justice and Peace for All in the Middle East. The Things That Make For Peace: Moving the World to Reconciliation and Unity. War in Ukraine, Peace and Justice in the European Region. Nicholas Jesson is the ecumenical officer for the Archdiocese of Regina, former ecumenical officer for the Diocese of Saskatoon, and former executive director of the Prairie Centre for Ecumenism. He is a member of the Anglican-Roman Catholic Dialogue in Canada, editor of the Canadian Council of Churches’ Margaret O’Gara Ecumenical Dialogues Collection, and editor of the Anglican-Roman Catholic Dialogue archive IARCCUM.org.