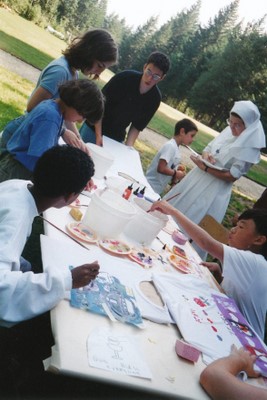 Imagine you have a special needs child. Maybe they have Downs syndrome, maybe they have Attention Deficit Hyperactivity Disorder, maybe they have Autism. Now imagine that you still want this child to learn about the faith, the faith that led you to keep them when doctors advised not to, or perhaps the faith that led you to adopt them when their biological parents decided to give them up. Perhaps you enroll your child in a Catholic School, or in a religious education program at your parish. They are being taught about the faith, but how much are they really absorbing? You want your child to be able to know and love Jesus just like you and I.
This is a problem faced by parents of special needs children everywhere. In 1981, a Vancouver group of parents in exactly this situation started lobbying the Archbishop for help. They wanted their special children to have the chance to be prepared for the sacraments just like other children. Eventually this led to the launch of a program called Vanspec, or Vancouver Special Education and Catechetical program. Nearly three decades later Vanspec is still running strong, forming the faith, not only of special needs children but also the volunteers and parents. Tonight's episode of Catholic Focus looks at the Vanspec program; the only one of its kind in Canada. You'll meet the director, Sr. Beth Ann Dillon, who has just returned to Vancouver to run Vanspec, as well some of the parents and volunteers involved in the program. Tune in tonight, February 17th, at 7pm and 11 pm ET (or 5pm and 8pm Pacific) for a look at Vanspec. You can also catch an encore presentation Saturday February 21st at the same times.