The official newspaper of the Archdiocese of San Francisco, the Catholic San Francisco, has published a letter by Cardinal William J. Levada responding to New York Times' articles on clergy sexual abuse and Pope Benedict XVI.  The Prefect of the Congregation for the Doctrine of the Faith defends the Holy Father and chastises the paper for being inaccurate and unfair.  He offers insight into the Milwaukee and Munich cases, internal Church governance, and shares his experience of dealing with abuse cases.  Clearly written and succinct, it's worth taking the time to read this article.  See the letter below, and also check out THIS blog entry for Salt + Light Television's recent Witness interview with Cardinal Levada. 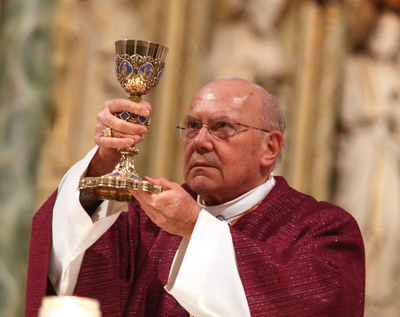 The New York Times and Pope Benedict XVI: how it looks to an American in the Vatican By Cardinal William J. Levada Prefect of the Congregation for the Doctrine of the Faith In our melting pot of peoples, languages and backgrounds, Americans are not noted as examples of “high” culture. But we can take pride as a rule in our passion for fairness. In the Vatican where I currently work, my colleagues – whether fellow cardinals at meetings or officials in my office – come from many different countries, continents and cultures. As I write this response today (March 26, 2010) I have had to admit to them that I am not proud of America’s newspaper of record, the New York Times, as a paragon of fairness. I say this because today’s Times presents both a lengthy article by Laurie Goodstein, a senior columnist, headlined “Warned About Abuse, Vatican Failed to Defrock Priest,” and an accompanying editorial entitled “The Pope and the Pedophilia Scandal,” in which the editors call the Goodstein article a disturbing report (emphasis in original) as a basis for their own charges against the Pope. Both the article and the editorial are deficient by any reasonable standards of fairness that Americans have every right and expectation to find in their major media reporting. Continue Reading