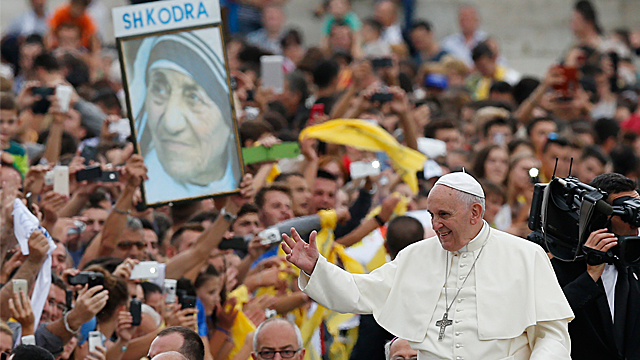 Call it an early Christmas Gift, call it a message about the kind of mercy Pope Francis wants us to show to the world. Whatever you want to call, the end result is the same: Mother Teresa is going to be canonized. A second miracle attributed to her intercession has been approved by Pope Francis.
The miracle involves the unexplainable healing of a then-35 year old man suffering from “multiple cerebral abscesses with hydrocephalus obstruction.”  He had undergone a kidney transplant and was on immune suppressors. He was in a coma with little hope for survival when his wife and family began praying to Blessed Mother Teresa of Calcutta.
According to a report in the Italian Catholic newspaper Avvenire, the man was scheduled to undergo surgery. There was a 30 minute delay in the surgery and when the surgeon finally arrived in the operating room the man was awake and asking what was going on. Upon examination the surgeon found no sign of any major health problem. His family was in the hospital chapel praying to Blessed Mother Teresa.
Vatican officials travelled to the diocese of Santos, Brazil where the man lives to study the case. It was forwarded to the Vatican’s Congregation for Saints Causes where a medical panel found there was no explanation for the man’s healing. A Theological panel also approved the miracle. Pope Francis accepted the congregation’s report on the miracle in a private audience with Cardinal Angelo Amato, prefect of the congregation, December 18.
No date was announced for Blessed Mother Teresa’s canonization, but Archbishop Rino Fisichella who is overseeing Jubilee Year events, stated earlier in the year that she could be canonized September 4, 2016. That would be one day before the anniversary of her death on September 5, 1997.
Fraudulent Blessings
This week 3,500 fake papal blessing parchments were seized from souvenir shops around the Vatican. While blessings cannot be sold or purchased, an official commemorative parchment communicating the blessing can be purchased. Those parchments are sold only by the Office of the Papal Almoner. The money from the sale of these parchments goes to the papal charity fund and helps finance the various projects the pope undertakes to help the poor.
There are several ways to order a papal blessing: in person, by fax, by mail (regular mail, not e-mail). Typically a papal blessing costs between 13 and 25 euros, depending on the type of parchment chosen. If you’re ordering a blessing for a special event, i.e. wedding, anniversary, ordination, be sure to do so several weeks in advance.
For full details on ordering a papal blessing visit the website for the Office of the Papal Charities.
--
CNS photo/Paul Haring
This week's episode of Vatican Connections will be available below shortly.