Behind Vatican Walls: All in a Vatican Week 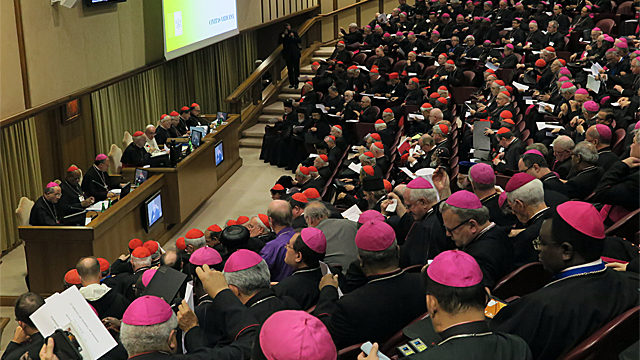 The three week Synod on the family is finally over, but the homestretch did not come without some drama: an Italian newspaper, Quotiando Nazione, reported that Pope Francis has a small, benign brain tumour. Cue the denials and conspiracy theories. Pope Francis provided his own plot twist, taking the floor on Thursday afternoon to announce he has created a new dicastery for laity and family. All of this pulling attention away from the fact that the final document has been written, voted on and is ready for delivery to Pope Francis.
-
Dr. Takanori Fukushima is a specialist in tumours at the base of the skull.  Quotidiano Nazionale said he was flown to the Vatican and diagnosed the pontiff with a small, benign tumour. Dr. Fukushima told Italian news agency ANSA he has treated three vatican prelates in the past but never the pope. In response, QN’s editor in chief claimed his paper never said Dr. Fukushima treated the pope, they only dedicated eight pages to the story, including a feature piece on Dr. Fukushima. All of this might sound horrendous to those not familiar with the Italian media landscape, but it’s just another day on the beat in Italy.
-
While the Vatican press office was busy squashing the tumour story, the synod fathers were once again in the synod hall for a general session. Pope Francis took the floor and announced:

He also revealed he has set up a commission that will draw up the statues for this new mega-dicastery. The statues will be presented to the pope and the Council of Cardinals at the next C9 meeting in December.
There is no indication yet who will lead the new dicastery or what will happen to the prelates who currently run the Council for the Family (Archbishop Vincenzo Paglia) and the Council for the Laity (Cardinal Stanislaw Rylko).
-
The final synod document has been reviewed and voted on section by section. As I write this post a 10 member panel at the Vatican is reviewing the results of that vote and drafting the final document that will be presented to Pope Francis.
What do we know about that final text: The majority of bishops and cardinals are much happier with this than the original. They felt the original document was unfocused (everything but the kitchen sink) and the audience of that text was not clear. Cardinal Oswald Gracias of Bombay told journalists to expect a text that outlines questions that need to be asked rather than proposing solutions.
-
For a unique - and lighthearted- take on the final stages of the Synod you might want to explore Archbishop Mark Coleridge’s blog “On the Road Together.” He delicately reveals some of the key moments inside the Synod hall.
--
Photo c/o Gabriel Chow
Watch this week's Vatican Connection below: