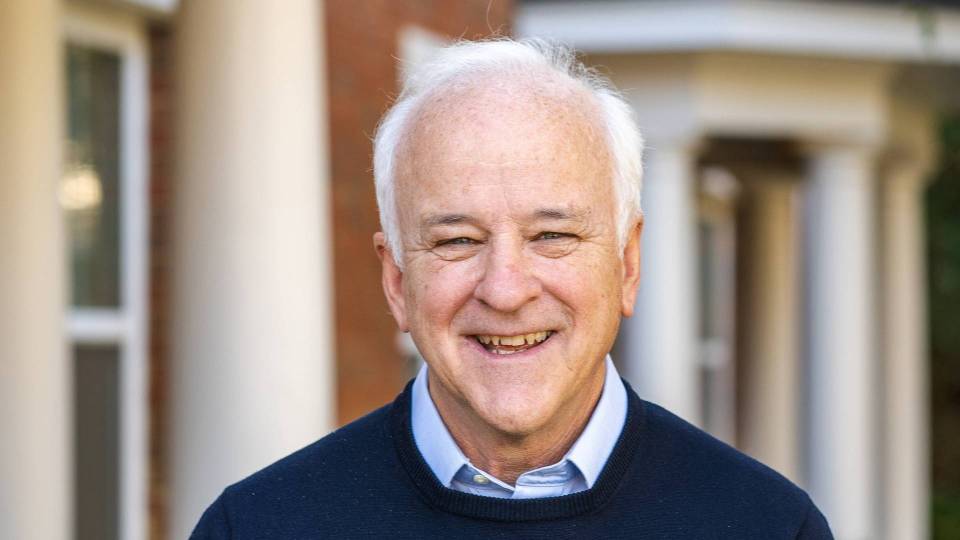 Jim Towey, author of "To Love and Be Loved -- A Personal Portrait of Mother Teresa," is seen in this Dec. 14, 2021, photo. (CNS photo/courtesy Valeria Tkacik, Aging With Dignity)
Jim Towey is one of the fortunate few who also got to know her as a friend. Towey, an attorney by trade who has also worked in government and academia over the years, first met Mother Teresa 37 years ago after he started volunteering at a soup kitchen run by the Missionaries of Charity, the order of religious sisters she founded in 1950 to work among the poor in the eastern Indian city of Kolkata, formerly known as Calcutta. The order has since opened hundreds of missions, medical clinics and hospices around the world, including 41 active facilities in the U.S. Struggling with what he considered the shallowness of his life in Washington at the time, Towey traveled to India in 1985 seeking an encounter with the future saint. That meeting which started their decades of friendship and changed the course of Towey's life, led him to dedicate much of his time to serving the poor and vulnerable. Towey then spent 12 years not only as a close friend but also a trusted adviser for Mother Teresa. He shares the story of his friendship with the saint in his new book: "To Love and Be Loved -- A Personal Portrait of Mother Teresa." The book, published by Simon & Schuster, was released Sept. 6, just one day after the 25th anniversary of Mother Teresa's death in 1997.

This is the cover of the book "To Love and Be Loved -- A Personal Portrait of Mother Teresa," by Jim Towey. (CNS photo/courtesy Simon & Schuster)
Largely written during pandemic-provoked shutdowns, it is a moving account of both Mother Teresa's life and the profound influence she had not only on Towey, but nearly everyone she encountered. Even after all these years, Towey said he still thinks daily about the living saint who befriended him and influenced every facet of his life, even helping him to meet his wife, Mary. Talking about Mother Teresa recently with Catholic News Service, he said: "I miss her company, her laugh and her motherly love. It was heaven to be around her." "She brought out the best in you. She just radiated love and was an interesting mix of joyful and serious. She just was a person you know was so in love with God that she was available to little people like me." Mother Teresa's influence on Towey is evident in the way his life changed shortly after meeting her in 1985. He wrote of how he left his job as a U.S. Senate staffer and eventually spent time discerning a vocation to the priesthood. Over the years, Towey would eventually lead the Office of Faith-Based and Community Initiatives under President George W. Bush, serve as president of two Catholic colleges and lead Florida's Department of Health and Rehabilitative Services. His years of working alongside Mother Teresa taught him lessons about human dignity and the importance of caring for the vulnerable. These principles prompted him to start Aging with Dignity in 1996, a nonprofit dedicated to advocacy for senior citizens where he serves as CEO. The group, based in Tallahassee, Florida, is best known for its "Five Wishes" advanced care directive. The directive, downloaded millions of times nationwide,  allows people to set down their medical, legal, spiritual and personal wishes for end-of-life situations. In his book, Towey writes of his 12 years as Mother Teresa's close friend and personal advisor, guiding her and members of the congregation through legal wrangles over visas, financial issues and even the inappropriate use of Mother Teresa's likeness, including a coffee shop in the southeastern U.S. that attempted to profit over a sweet roll that supposedly resembled the famous sister. There are plenty of details in the book that prompt a smile and cast a new light on this modern saint, including anecdotes about Mother Teresa's famous sweet tooth and love for chocolate, her keen sense of humor and the relationships she developed with everyone from politicians and actors to Princess Diana of Wales. "I wrote this book because I wanted people to know that she is not some plastic saint," Towey said. "She was flesh and blood and grit and determination. She laughed. She loved the sisters. But she also cried and knew darkness and abandonment. She was fully human. What made Mother different from us was how generously she responded to God's love in the day to day events of her life." Towey's greatest hope for the book is that it will be a "means of encouragement to individuals in their walk with God," especially those who are struggling with their faith as Mother Teresa did or have fallen away altogether. "I'm hoping this book will deepen people's awareness of God's love for them and God's thirst for them," he said. "The church is only beginning to understand the greatness of Mother Teresa. Her theology is so simple yet so profound." He also believes Mother Teresa's commitment to one-on-one contact with people and her desire to show God's love to all those she encountered offers a particularly profound message as the world struggles to return to some sort of normalcy after the enforced isolation of the coronavirus pandemic. Towey recalled that Mother Teresa shunned much of technology and did not even like to have her photograph taken. If she were alive today, he thinks she would not make much use of social media because it would distract her from her dedication to being fully present for anyone she met or served. "If Mother were here today, she would remind us that people are more important than things and urge us to rediscover the wonder and beauty of our neighbors," Towey said. "She would remind us of the terrible disease of loneliness that afflicts so many people young and old," he added, "and invite us to go and give the bread of friendship to others."