Assisi: History in the Making 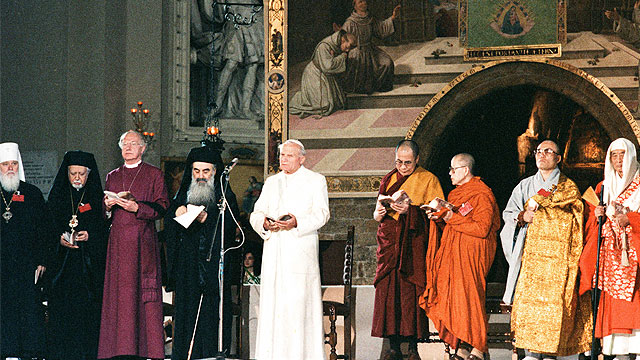 It was October 27, 1986 when St. John Paul II gathered in the same place with the religious leaders of the world to promote peace in the name of dialogue. No more than 100 people gathered, a number which today has multiplied by five. The meeting was attended by 50 representatives of Christian Churches, including Catholics, and 60 representatives of other world religions. It was the first meeting of this kind in history. The intuition of the Polish Pope was simple and profound at the time: to bring together believers of all faiths in the city of St. Francis, with an emphasis on prayer for peace, in the face of the horror of war. The pontiff then spoke very clearly. He said: "It's itself an invitation made to the world to become aware that there exists another dimension of peace and another way of promoting it, which is not the result of negotiations or political compromises". The belief was that "prayer and the witness of believers, whatever their tradition is, can do much for the peace in the world". In his closing speech, John Paul II exhorted: "Continue to live the message of peace, continue to live the spirit of Assisi." The choice of this place by Pope John Paul II, was not random. It is the city of St. Francis, a saint who 800 years ago was known to invite each person into dialogue with one another. In St.Francis’ day, there were in fact conflicts between Christians, Cathars and Albigensians, which resulted in violent crusades against Islam. By proposing Assisi as the place for these meetings and prayer, St. John Paul II made a prophetic as well as courageous gesture. Prophetic, meaning in harmony with the spirit of Vatican II, and courageous because by doing so he exposed himself to criticism from many. In fact, many condemned the initiative for what seemed like an amalgamation of religions, namely Archbishop Lefebvre, who spoke publicly against it, calling it the “Imposture of Assisi”. This important event, however, gave a new push in the dialogue between religious traditions. Some years later, history was made again with the visit of the Muslim delegation to Auschwitz in 1989, while the inter-religious meeting in Bucharest in 1998 opened the way for the visit of John Paul II to Romania the following year, the first by a pope to a country with an Orthodox majority. The day in Assisi, last Tuesday, ended with a peace appeal that was delivered to children. An appeal that inevitably started right from the first meeting hoped for by Karol Wojtyla and it stressed the value of prayer and the desire to have a world understood as a great family of peoples. This is the objective of Pope Francis and religious leaders gathered in Umbria, the same great desire that propelled John Paul II 30 years ago.