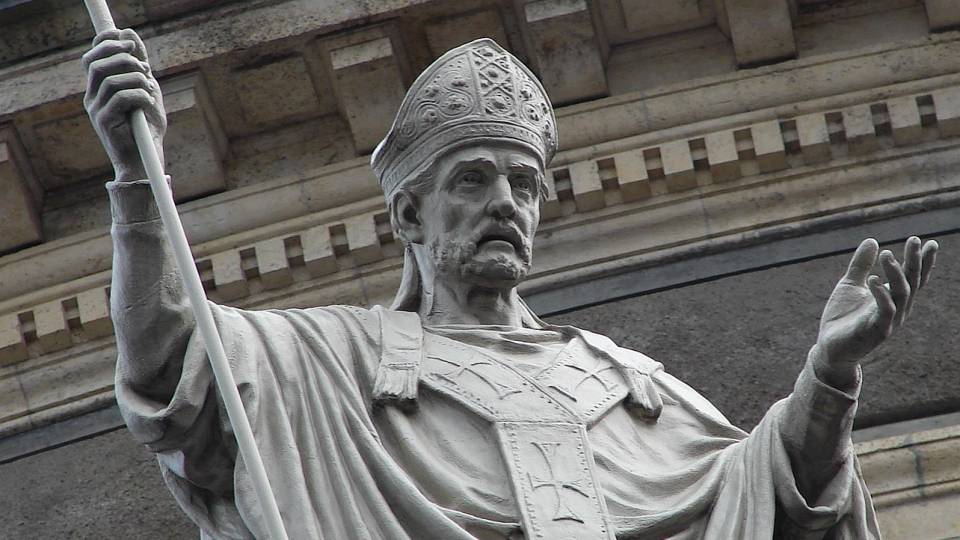 In our Catholic Christian tradition we’ve been blessed with many role models for holiness in our saints. But sometimes it can be difficult to keep them all straight. In this series, “Telling them apart,” I am presenting some side-by-side comparisons in order to help us keep track of commonly confused saints. Today I am looking at two “golden” Doctors of the Church.

Chances are most people have never heard of these two saints of the early Church. And if you’ve only heard of one, it’s probably John Chrysostom, who is considered one of the great Church Fathers. Or perhaps from time to time – at daily Mass twice a year or in a homily – you hear a name and say to yourself, “Oh, it’s that Chryso-something guy again.” Here is a brief look at two great men who, in a time when public speaking was an art form, were known as men of golden speech. Too bad we don’t have more of them around today!

St. John Chrysostom, the “Golden-Mouthed” Archbishop of Constantinople, lived a somewhat tumultuous life. Born around the year 349 AD in Antioch, one of the great cities of the Eastern Roman Empire, young John aspired to a life of prayer, penance, and study. He joined a monastic community, where he lived an ascetic lifestyle of rigorous fasts and vigils, but these practices soon took their toll on his health, and so he returned to Antioch to serve the Church there and was ordained a priest in 386. He soon became known as a gifted and popular orator. He spoke with great eloquence and enthusiasm, explaining the Scriptures and points of Christian morality in a way that made them accessible to the average person. However, I don’t know how much he would have been appreciated by modern listeners since his homilies were prone to digression and could last up to two hours! In 398, Emperor Arcadius brought John to Constantinople, the capital of the Eastern Roman Empire, and made him archbishop. This was entirely against John’s desire for his own life, but he accepted it as a sign of God’s will. In becoming Archbishop of Constantinople, John immediately made several enemies who had coveted the position for themselves or their own candidates, including Theophilus, Patriarch of Alexandria (more about him in a little bit). John continued to make enemies by cracking down on abuses by the clergy, who were causing scandal through their lifestyles of luxury, and he also had to deal with cases of murder and adultery. He himself continued to live an ascetic lifestyle and used his funds as bishop to care for the poor and to build hospitals. He often preached against abuses of power and wealth, which made him popular with the people but much less so among the many wealthy and powerful people who lived in this city which was the beating heart of a great empire. Finally, Empress Eudoxia, having taken exception to John’s preaching as a personal affront, joined forces with Theophilus of Alexandria. In 403, Theophilus was called to Constantinople to explain himself before a synod but managed to use the synod to make false accusations (including heresy and treason!) against John. When John refused to defend himself before what was essentially an illegal court, he was tried in his absence and deposed as archbishop. Although Emperor Arcadius relented, partly on account of popular opinion in the archbishop’s favour, John’s enemies succeeded the following year in having him sent into exile. He died three years later far from the capital at a place called Comana on the Black Sea, leaving behind several hundred sermons and more than 200 letters (the letters were all written during his exile). 34 years after his death, Theodosius II, son of Arcadius and Eudoxia, had John’s relics returned to Constantinople. In 553, Pope Vigilius referred to him as Chrysostom (“Golden-Mouthed”), and we have been calling him that ever since. He was declared a Doctor of the Church in 1568, and in 1908, Pope Pius X made him the patron saint of preachers. His feast day in the Roman Catholic Church is September 13.

Need alone is the poor man’s worthiness; if anyone at all ever comes to us with this recommendation, let us not meddle any further. We do not provide for the manners but for the man. We show mercy on him not because of his virtue but because of his misfortune, in order that we ourselves may receive from the Master His great mercy, in order that we ourselves, unworthy as we are, may enjoy His philanthropy. For if we are going to investigate the worthiness of our fellow servants, and inquire exactly, God will do the same for us. (from a sermon on Lazarus and the rich man) 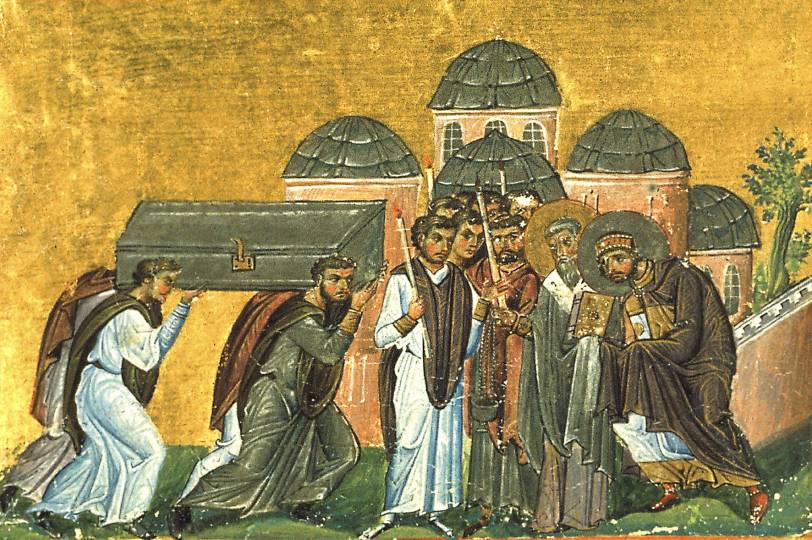 The return of the relics of Saint John Chrysostom to the Church of the Holy Apostles in Constantinople, from the Menologion of Basil II, a manuscript currently in the Vatican Library. Source: Wikimedia Commons.

We know far less about the life of St. Peter Chrysologus, and although his life makes for less exciting reading than St. John Chrysostom’s, his homilies might have appealed more to a modern audience since they tended to be short. He was born sometime around 406 AD in northern Italy at a place called Imola, and this is also where he died in 450. Like John Chrysostom, Peter was also apparently an unexpected and reluctant choice for an archbishop. Tradition says that when the people of Ravenna asked Pope Sixtus III to confirm their choice for a new archbishop, he chose instead a young deacon from among the entourage on account of a vision he had had during the night. When Peter became Archbishop of Ravenna in 433, it was the capital of the Western Roman Empire, but this was also a period of decline and political strife for this part of the world and the Western Empire was basically on its way out. He is pretty much remembered exclusively for his wonderful sermons, which is why he is called Chrysologus (“of Golden Speech”), a name given to him by Empress Gallia Placidia, according to legend. So we can assume that he had a better relationship with his local empress than John Chrysostom had with his! 176 of his homilies, mainly sermons on biblical texts, were gathered together in the 8th century. And in 1729, Pope Benedict XIII declared him a Doctor of the Church. His feast day is celebrated on July 30.

Listen to the Lord's appeal: In me, I want you to see your own body, your members, your heart, your bones, your blood. You may fear what is divine, but why not love what is human? You may run away from me as the Lord, but why not run to me as your father? Perhaps you are filled with shame for causing my bitter passion. Do not be afraid. This cross inflicts a mortal injury, not on me, but on death. These nails no longer pain me, but only deepen your love for me. I do not cry out because of these wounds, but through them I draw you into my heart. My body was stretched on the cross as a symbol, not of how much I suffered, but of my all-embracing love. I count it no loss to shed my blood: it is the price I have paid for your ransom. Come, then, return to me and learn to know me as your father, who repays good for evil, love for injury, and boundless charity for piercing wounds. (from Sermon 108, PL 52, 499-500) 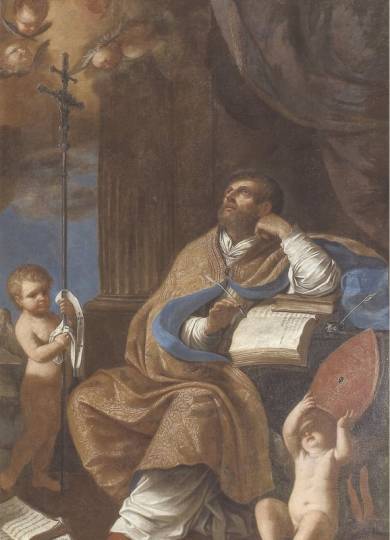