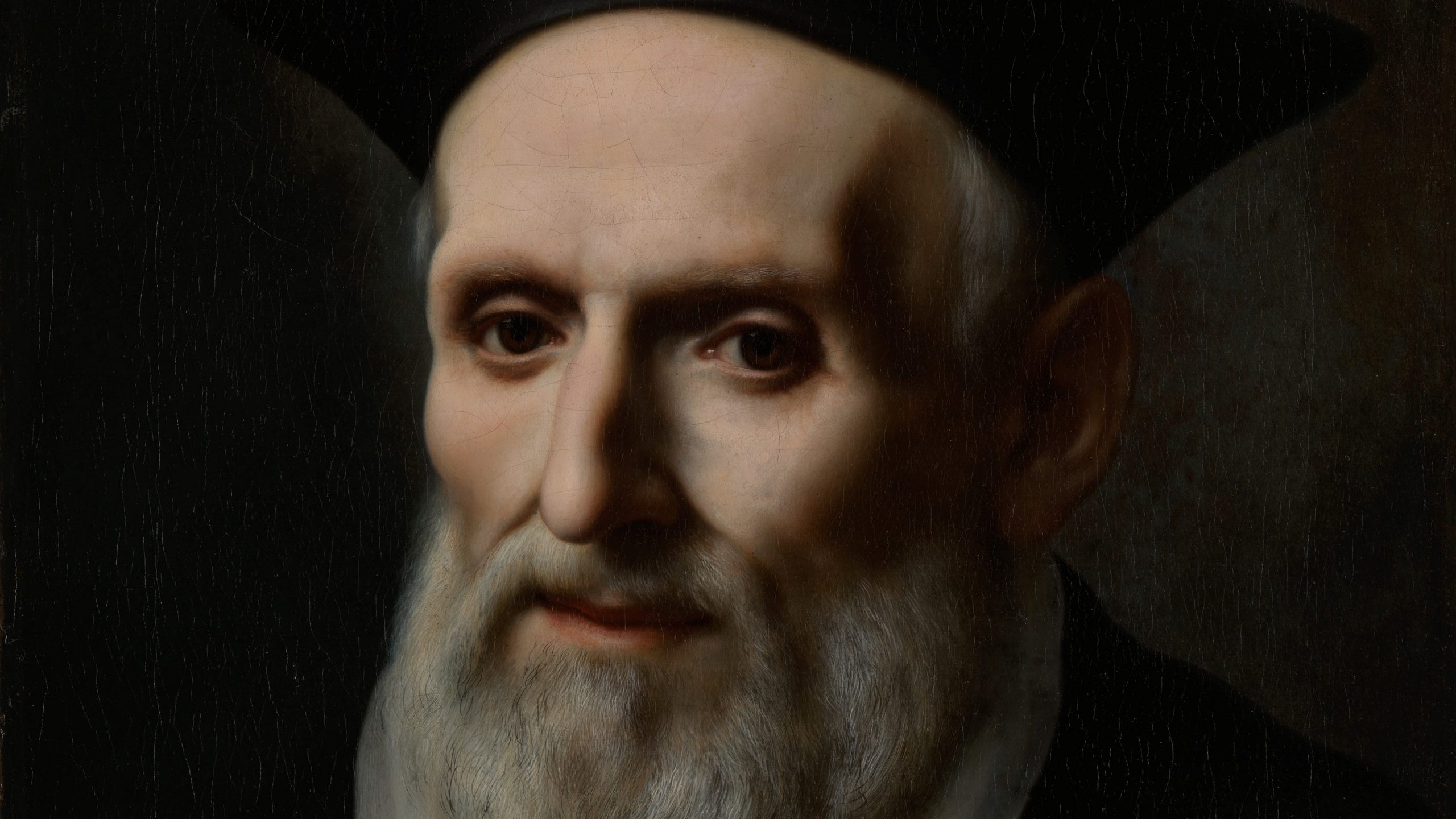 Detail of Saint Philip Neri by Carlo Dolci (Source: Wikimedia Commons)
St. Philip Neri came into this world in Florence, Italy, on July 21, 1515, and grew up in an era of great change and turmoil. This was the time of the Protestant Reformation, which tore the Church in Europe apart. Armies clashed in the name of religion, and both Protestants and Catholics were persecuted and executed for their beliefs. In 1533, abandoning the prospect of a career in business and the promise of certain wealth, Philip came to Rome, a city suffering from the excesses of clericalism and still recovering from the devastation wreaked by the army of the Holy Roman Emperor in 1527. It was a time when the priesthood was seen as an avenue for worldly advancement and priests often neglected their sacred duties for worldly pleasures and power. It was a time of intrigues and rivalries and Carnival. Into this world stepped Pippo Buono – “Decent Phil” – a young man with a simple and deep piety. His unfailing goodness, joy, and compassion drew souls to Christ “as the magnet draws iron” – as an early biographer expressed it. And by the time of his death on March 26, 1595, he merited not only the title of “Saint” but also “Apostle of Rome”.

What’s in a name?

It is rather an astonishing thing for a man from the 16th century to be called the “Apostle of Rome”. After all, weren’t there Christians in Rome only a generation after the Resurrection of Christ? And didn’t two of our greatest saints of the early Church – the Apostles Peter and Paul – suffer martyrdom in Rome? And hasn’t the centre of Catholic Christianity been at Rome for twenty centuries (apart from an embarrassing episode in the 14th century)? And if you’ve ever been to Rome, you’ll know that you can hardly turn a corner without tripping over the tomb of a saint. So what makes Philip Neri so special? Here I cede the floor to one of St. Philip’s spiritual grandchildren: the recently canonized St. John Henry Newman, who explains it beautifully.

During his life, St. Philip – somewhat inadvertently – founded a society of men seeking after holiness, which received an official papal seal of approval in 1575 and is known as the Congregation of the Oratory of St. Philip Neri. In the middle of the 19th century, the famed convert John Henry Newman brought the Oratory to England, and in 1850, on the occasion of the first anniversary of this new foundation, Newman preached a sermon titled “The Mission of St. Philip Neri”, in which he examines their patron’s unusual title:

You know, my Brethren, what is commonly meant by an Apostle of a country. It means one who converts its heathen inhabitants to the Christian faith, such as St. Augustine of England; accordingly, his proper function is Baptism. Hence you find St. Augustine, St. Patrick, St. Boniface, or St. Francis baptizing their hundreds and thousands. This was the office to which St. Philip wished to minister in India; but … he was kept at home for a different work. He was kept at home, in the very heart of Christendom, not to evangelize, but to recover; and his instrument of conversion was, not Baptism, but Penance. The Confessional was the seat and seal of his peculiar Apostolate. Hence, as St. Francis Xavier baptized his tens of thousands, Philip was, every day and almost every hour, for forty-five years, restoring, teaching, encouraging, and guiding penitents along the narrow way of salvation.

All things to all men

Philip’s humility was so great that he would never have become a priest without the urging of his confessor. And so, at the age of 35 and in obedience to his confessor, he was ordained to the priesthood. His life until then had already been one of prayer and service, but now those elements took on a different aspect: that of the priesthood. He devoted the rest of his life to the celebration of the Mass and to confession. This may seem a strange thing to say about a priest, but we are talking about a time when priests were not accustomed to saying Mass every day and ordinary people, even if they were fairly religious, tended to receive the sacraments of communion and confession infrequently – often only once a year. But Philip had a profound understanding of the debilitating effects of sin and the necessity of the graces we receive in the Sacrament of Reconciliation for drawing us closer to God. He is quoted as saying:

Frequent confession is the cause of great good to the soul, because it purifies it, heals it, and confirms it in the service of God: we ought not therefore to omit confession on our fixed days for any business whatsoever; but go to confession first, and to business afterwards, and the first will help the last.

But if you think, after hearing that, that St. Philip was a strict and dour disciplinarian who held people to impossible standards, think again. It is not for nothing that he is also known as the “Apostle of joy”. He had a great gift for understanding the needs and disposition of each person, and he could be gentle or stern as the occasion demanded – though gentleness was by far more common with him and sternness usually an act, to the point that other priests grumbled about his leniency. People flocked to him for confession and returned again and again – not so much for his lighter than usual penances but because of the consolation they received there. His joy was infectious. Literally. Even outside of the confessional, people found that sadnesses or temptations would leave them at his often playful touch. He was devoted to his penitents. He spent hours every day in the confessional. And when there was no one wanting to confess at a particular moment, he would stand in the doorway of the church so that people would know he was available. When he was in his room, he kept the door open so people could easily find him there. And reading through his biography, there seem to be mainly two types of occasions which found him reprimanding people: when they praised him for his holiness and when they tried to prevent a penitent from reaching him (even though it was often out of concern for him).

When I lived in England, I used to go to the Oratory in Oxford for confession. At first I went because none of the priests there knew me, but over the years, I continued to go back because of the experience of the sacrament I found there. I had been no stranger to the confessional or to the relief felt after a long-delayed or dreaded confession. And although I’ve experienced the odd confessor who has clearly woken up on the wrong side of the bed, I would say that the majority of my confession experiences have been positive. But confession at the Oratory was something different. I always received personalized counsel from the priest – a rarity in my life to that point – and it was always gentle and uplifting. I left feeling not only relieved but consoled. And there was one priest in particular who often made me laugh. Laughing in confession? I never would have thought it possible. I once told someone about this experience of confession at the Oratory, and they responded, “Well, that makes sense. It is their charism after all.” I had no idea what they meant until years later when I learned about St. Philip Neri. And I attribute to the Oratorians and their gentle, joyful way of hearing confessions my change in understanding and deeper appreciation for the Sacrament of Reconciliation. I still dread it at times and have varied in my regularity over the years – it’s human nature, I think. But now I recognize it for the great gift that it is. I find it interesting that over the last two months with the multitude of opinion pieces addressing people’s sorrow at not being able to attend Mass, I don’t think I’ve read a single person saying how much they miss confession. So I’ll say it. I miss confession. I miss those moments of preparation: at home, on the subway, in the church as I try to conjure up those faults and missteps that my subconscious has promptly and loyally buried. I miss that reminder that of course I’m not perfect because none of us is. I miss that moment of crossing from a busy city street into the hushed solemnity of a church and that moment of either joy or panic on seeing no line and an open confessional door (I don’t miss confession lines!). I miss that voice on the other side of the grate saying those familiar words. And though I can’t say I particularly miss the sometimes gut-wrenching effort of saying my faults aloud (pride – don’t forget pride!), I do miss the half-awareness of awe at a barely-grasped reality that I am speaking to a man but really to God, and when he says those words it will be really God saying them: “I absolve you from your sins…” I miss the joy at hearing those words again and knowing them to be true. Confession gets kind of a bad rap these days. People tend to focus on the guilt aspect rather than the mercy. But in my experience, that’s not a view that comes from inside the confessional. Sure confession is hard. We have to struggle against human nature and the drive for social acceptance, which dictate that we should hide our faults or even rationalize them. In confession, we have to come face to face with who we really are. The only thing that can make that easier is constant practice. Regular confession is as necessary for spiritual fitness as regular exercise is for physical fitness. St. Philip Neri understood that. He understood, too, that “frequent” confession should mean different things to different people. And by his emphasis on confession and his gentle, human approach to the sacrament, he was able to provide himself as God’s tool to convert a city.