Anticipation high in Montreal with only hours to go 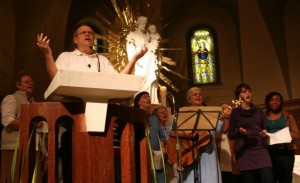 MONTREAL — Anticipation is high in Montreal with only hours to go before the canonization of Br. André in Rome. “There’s a constant flow of pilgrims coming and going,” said Danielle Decelles, a communications officer at the oratory, October 17 at 1 am. Reams of people continue to stream into the crypt church of St. Joseph’s Oratory for the six-hour prayer vigil that is being held here in the hours before the canonization. There are at least 1,000 people in the church — most seated either in the pews, on the floor or on their own folding chairs, while others remain standing — at any one time during the vigil. Many of those present are seniors, and about a dozen people with obvious physical disabilities are among them. Despite their obvious fatigue, many are rallying their energy to experience the historic moment when Br. André will become the first Canadian-born male saint. 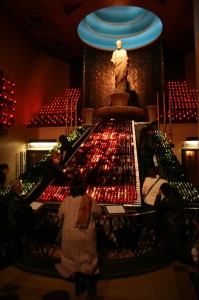 Each hour of the vigil has been led by a different group. The Family Life Office of the Archdiocese of Montreal took the first hour. Joined by some new movements present in Montreal, such as Chemin Neuf, Bande FM, Famille Myriam and Christ-Roi, they got people singing and praising God aloud. The second hour was led by the Vocational Recruitment Committee of the Congregation of Holy Cross. A group of young adults then led an hour of Taizé prayer, followed by eucharistic adoration, another hour of praise and worship with Famille Marie-Jeunesse from Sherbrooke, and morning lauds with the Monastic Fraternity of Jerusalem. At 3 am, those present will be invited to take a mini-pilgrimage and to visit the major sites on the oratory grounds, namely the tomb and heart of Br. André, and the basilica. Though throngs of people have been visiting and praying at these sites throughout the night. The prayer vigil began at 9:30 pm, on October 16, and will continue up until the live broadcast of the canonization on a big screen in the crypt church at 4 am, October 17.