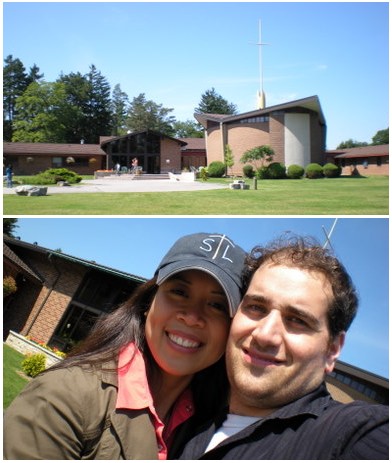 I work in the unpredictable world of media and so does my fiancé. As we prepare for marriage, we find it a great blessing to have an opportunity to go away and have a whole weekend of peace and quiet in order to fulfill the archdiocesan requirements for marriage preparation.
We heard about the Queen of Apostles Renewal Centre in Mississauga, Ontario, a place under the direction of the Missionary Oblates of Mary Immaculate of Assumption Province, which is a Roman Catholic religious congregation of priests and brothers. This centre is committed to fostering strong couple relationships in marriage and in preparation for marriage. Their “Engaged Encounter Weekends” start on Friday evenings and end on Sunday afternoons. This was perfect for this engaged couple’s crazy schedules! We called months ahead to register for the program, not knowing what to expect. On September 4th, we arrived to a “full house” of 31 couples preparing for marriage. This happened to be a long weekend, and we could tell that some couples would rather be doing something else on a great sunny weekend other than sitting through marriage preparation talks. Under the direction of Fr. Wojciech Blach, who always made sure humour and simple anecdotes were a part of every presentation, everyone left with grateful hearts. There were two “team couples” – these were the couples who volunteered their time to share with us their experiences of at least 40 or so years of married life. For every theme or topic, they had personal stories prepared – on topics such as managing money, dealing with in-laws, handling conflicts, and ways of communicating. One story that stands out for me is the time that one couple struggled over their dream boat. The husband loved sailing and bought a boat at the beginning of their marriage that both he and his wife loved. The husband would go on the dream boat with his friends, while his wife’s vivid imagination of the two of them sailing in the wind, with their young ones playing in the deck below, went on the backburner. There were fights, cold shoulders, and disillusionment that almost led to a separation. It was at a Marriage Encounter weekend after 15 years of marriage that helped them realize they needed to do a lot of work to save their marriage. They had decided long ago to love each other, and they had to learn to communicate that love to each other. The wife’s words to the 31 couples she was telling this story to were: “Don’t kid yourself. Marriage IS work.” One work that’s cut out for me and my fiancé came out of “The Keirsey Temperament Sorter”. After the test, we found out that we are complete opposites. No wonder we disagree on something every 10 minutes! I can now understand better his perspective on things and will try very hard to see where he is coming from whenever we have a disagreement. Overall, we had a wonderful weekend of being together, being in dialogue, and praying in union with 30 other couples. It is a special opportunity for couples that we highly recommend!