Across the Divide Tour hits the nation's capital

This past Wednesday, the S+L team was on hand at Saint Paul University in Ottawa to host the fourth national screening of our latest film Across the Divide. And what an event it was! At a cocktail reception before the film, church dignitaries mingled with people from all walks of life, including a Canadian senator, all interested in learning about the current situation of our Christian brothers and sisters in the Holy Land. As the event drew near, our marketing team was delighted to see a lineup of people patiently waiting to purchase tickets at the door. Soon, the theater was filled to near-capacity. Without a doubt, the film evoked a wide range of emotions from the audience -- from sadness, to sympathy, to a strong motivation to take action. One of the most interesting aspects of the event, however, was the Q&A panel discussion featuring the Archbishop of Ottawa, Most Rev. Terrence Prendergast; Carl Hétu, the National Director of CNEWA Canada; Kris Dmytrenko, the film's writer and co-director; and Fr. Thomas Rosica, CSB, Salt + Light's CEO. Even more than at our previous screenings in Vancouver, Toronto and Halifax, this event elicited a very politically-charged discussion and a call-to-action from the crowd. 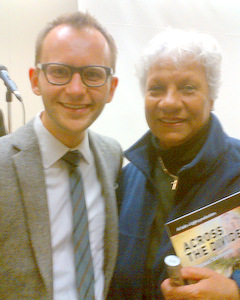 After the lively panel discussion, a standing ovation concluded the event. Many viewers lingered long afterwards, eager to chat with the panelists and the S+L team. While the screening was another success for S+L, the most important achievement was this: to tell the story of our Christian brethren in the Holy Land, in particular the struggles of the students at Bethlehem University. At the end of the day, none of this would not have been possible with out the support of our many friends in Ottawa, including Sarah Du Broy from the Archdiocese of Ottawa, Marianka Charalambij and Sylvie Moisan from Saint Paul University, Carl Hétu and Melodie Gabriel from CNEWA Canada, and the many great volunteers who assisted us throughout the evening, including a large contingent of young people affiliated with NET Ministries and Catholic Christian Outreach. Stay tuned for details about future screenings. Windsor and Montreal, here we come!