A Day at the Races

A few of Salt+Light's team celebrated Mass in a different way this Sunday: at the Honda Indy Races. The Indy took place this past weekend at Exhibition Place in Toronto. We were the guests of Father Phil De Rea, MSC, Catholic Chaplain of the Indy Racing League Ministry (IRL). 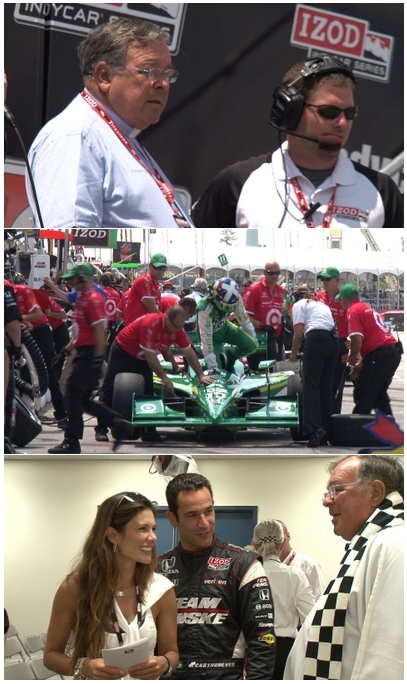 Father Phil has been a  close friend of the Andrettis, the famous racing family dynasty, for over 50 years -- he was a childhood friend to Mario Andretti!  He would visit the race track to celebrate Mass for the Andretti family and over the years, they suggested that he travel with the Indy circuit to celebrate Mass for others at the racetrack. So began Father Phil's involvement with the IRL (his work is even under the jurisdiction of the Pontifical Council for People on the Move, or Migrant and Itinerant People!). He along with Bob Hills, the Director and Protestant Chaplain for the IRL Ministry travel religiously with the Indy circuit, literally. It is a wonderful practice of Ecumenism that involves everyone on the circuit, no matter their religious denomination. I was so impressed with their dedication to their ministry and to the members of the Indy Racing League. It was a privilege to be able to get an insider's look at how this group comes together on Sunday before the race to be with one another in the presence of God before they immerse themselves into a very tiring and action-packed day of loud cars and screaming fans. The IRL is one big family traveling throughout the world. It was very humbling to be able to share in their Sunday Mass. We were lucky enough to get an interview with Brazilian racecar driver, Helio Castroneves who ranks 5th in the 2010 Indy racing standards. He spoke about his faith as a Catholic and how much Father Phil's presence means to him. He never misses a Mass at the races and is happy to have the chance to celebrate his faith before he races. The IRL Ministry does more than celebrate Mass on Sunday, they are a constant source of spiritual guidance and support for the memebers of the IRL. Fr. Phil has baptised many babies and performed a number of marriages too. Watch Perspectives, the Daily Edition, tonight with Matthew Harrison to see all of the Indy action Salt + Light took part in on Sunday. That's @ 7:00pm and 11:00pm ET or 8:00pm PT. Read more about Father Phil DeRea HERE.